Raleigh, NC — The Carolina Hurricanes defeated the San Jose Sharks 5-2 on Friday, February 19, 2016 at the PNC Arena but lost to the Tampa Bay Lightening two days later on Sunday evening.

They say a good team in any sport does not lose two games in a row. After a disappointing loss the night before in Ottawa, the Canes returned to Raleigh at 3 am only to face a strong San Jose Sharks team just 16 hours later.

San Jose was, more or less, feeling the same, as they also arrived around 3 am after a win in Florida. So much for the morning skate – the key would be rest. It was also going to be interesting to see how the young Canes would adapt.

Many of the Canes were playing college or junior hockey at this time last year, which is playing less than half the games of the NHL schedule. If you were at the game, though, you saw that every young gun played well with no evidence of being tired or hitting the proverbial wall.

Terry Has the Force With Him

For some reason, the teams in the west are even bigger than teams in the east, and the Sharks meet that criteria. Size helps, but skill, speed and heart play an important factor in the NHL. For those who haven’t noticed, the Canes are playing some of their best hockey in the NHL since early December. Despite all the press about Cam Ward being washed up, he has one of the best records since early December. He has not lost a game in regulation during that time, with his GAA and save percentage among the league leaders. As I’ve said for years, Ward can only do so much – a lot has to depend on the defense in front of him, so he’s not left out to dry, which has happened all too often in seasons past.

It’s not a coincidence that the Canes’ and Ward’s play has elevated when many of the ‘young guns’ were called up from Charlotte. The Canes opened the scoring just over the seven minute mark when Riley Nash out-manned a Shark then passed the puck up to Noah Hanifin on the left point. Just as the pass was being made, Chris Terry went to the high slot.

Hanifin made an aerial pass to Terry who, on this Star Wars themed night, made an unbelievable tip, shove, push – whatever you want to call it – from 20 feet out to have the puck float over everyone into the goal with goalie Martin Jones still looking ahead in a “Where’s the puck?” mode. Let the force be with Chris Terry.

The Sharks answered another seven minutes later on a pretty pass to Brett Burns, who sent a shot through traffic past Ward for his NHL leading 19th goal as a defender. Burns, who could double as a model for Smith Bros cough drops, ironically wore a Chewbacca mask at the All Star break during the skills competition.

Nordstrom Scores on a Blast Shot

The second period was somewhat combining old time hockey and classic 2016 Canes hockey. The forechecking was tighter, the tenacity was higher, the grittiness was more evident and the Canes were shadowing every Shark on the ice.

After a penalty-free first, six were called in the second, including a couple of offsetting penalties. The only score in the second was Joakim Nordstrom from 40’ out on a nice passing play beginning with Brett Pesce over to Jordan Staal and then to Nordy. The Canes held the Sharks to just four shots in the second, and, for a team with the arsenal the Sharks have, it says just how effective the Canes’ defense and forechecking has been.

Skinner Nets Two in the Third

The Canes started the third period on the back end of a power play, which is always nice on fresh ice. Play is much faster on fresh ice and the Canes are a fast team, so this was made to order. The top powerplay team was on the ice, passing and shooting at will. Jeff Skinner, behind the net, seemed to have the puck on a string.

Skinny saw Eric Staal crash the net and threaded a pass right on his tape. Staal’s shot was blocked by Jones, but Skinny came around the net and banked a shot off Jones’ skate into the net that every Caniac saw, but the men in black and white with the orange arm bands saw differently and called no goal.

After video review, with everyone yelling and making the goal signal, the call was overturned, and Skinner was awarded his team leading 20th goal. Halfway in the period, the puck was sent deep along the boards into the Canes’ end. Ward came out to send the puck to the corner, but Patrick Marleau put on his afterburners, got to Ward behind the net and stole the puck sending it to Tomas Hertl all alone in front of the empty net getting the Sharks back in the game.

Good teams respond, and that’s what the Canes did. Around five minutes later, Skinner got his 21st goal of the season, and red-hot Jordan Staal got an empty netter after Jones was pulled early. The Canes playoff hopes are still alive, making GM Ron Francis’ trading deadline decisions that much harder. Seeing the number of scouts at games and hearing that the Canes have their scouts at other games, I can’t help but think something is in the works.

Later in the weekend, on Sunday, February 21, 2016, the Tampa Bay Lightning earned a 4-2 come from behind victory against the Carolina Hurricanes in a critical game for both teams. With the trade deadline just a week away, this game and the next few could be the deciding factors for the Canes to be buyers or sellers. If the Canes had won this game, and if they win the next two, there’s a good chance that they would have stayed intact as they push for a playoff position.

Losing this game makes the next two games must-win games. Long-time Canes players Eric Staal and Cam Ward could be among those traded. Others in the rumor mill are Kris Versteeg (going to Chicago), John-Michael Liles and Ron Hainsey. The Canes have numerous players that will be either a RFA or an UFA after this season, but the fact is that any player is subject to a trade if GM Ron Francis thinks it will improve the team.

In the game, the Bolts were missing their leading scorer, but they still have Steve Stamkos, who is one of the top three offensive players in the game today. Jeff Skinner used tenacity to dig for a puck in the corner on his first shift. 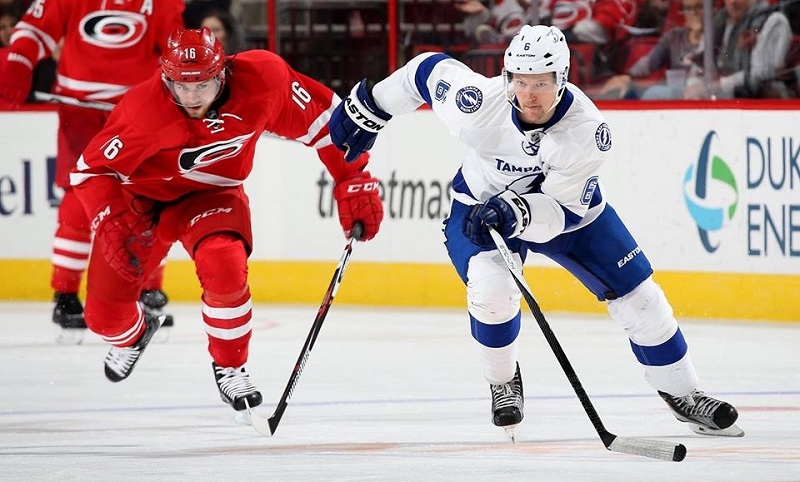 That aggressiveness drew a penalty, putting the Canes on an early powerplay. The Bolts held the Canes without a shot on the man advantage, as close-checking was obviously mandated by both coaches. The first shot of the game was at the seven minute mark, which made Ward have to make a tough save. After sloppy play in the Canes’ end, Liles was trying to clear the puck high out of the zone towards the Bolts end but misguided the puck into section 119.

Tight-checking by the Canes this time had great results – there were no shots by the Bolts and a goal for the Canes. Jaccob Slavin cleared the zone on a pass to Jordan Staal, and Staal saw daylight and made a dash into the Bolts’ end. With just one defender back, Joakim Nordstrom seized the opportunity and joined Staal on the rush.

Staal got within 30 feet then made a slick saucer pass behind the defender that Nordy picked up like a shortstop and slapped it into the net for the Canes’ second short-handed goal of the year.

The Lightning came out with a vengeance after only getting six shots on net in the first, and they were determined to send more rubber towards Ward. The Canes forechecking was still effective, as the Bolts were only able to muster five shots. However, two of those got past Ward. There were no gift goals in this game, and all but the empty netter were earned – and none more than Michal Jordan’s that tied the game at two a piece.

Jeff Skinner danced with the puck inside the blue line in the Bolts’ end then passed to Jordan, crossing the blue line as he was just starting his shift. Jordan skated down a bit, faked a pass/shot towards the net then put on his after burners, skated a behind the net, threw his body over the goal line with arms extended and twisted his stick to curl the puck into the net with force. He fell to the ice and bounced higher than a superball, resulting in smiles and high fives to everyone Cane on the bench. Jordan was the last Cane on the current roster to score a goal.

Stamkos Does What He Does Best

The Canes knew what was on the line in the third with every player stepping up their play to playoff speed. The Bolts were doing a good job defensively, and goalie Ben Bishop was stopping everything thrown at him.

Stamkos is a threat whenever he is on the ice and a double threat on the powerplay. With Jordan Staal in the box on an accidental high-sticking penalty after a missed coverage in the mid-slot area, Tyler Johnson fed Stamkos, who slapped it home for a 3-2 lead just over midway in the third.

The Canes couldn’t get it done, with the best scoring chance being Skinner’s shot with about four minutes to play. Fans that were at the game were trying their hardest to help the refs, as several plays that appeared to be penalties live as well as on the Jumbotron sure looked like penalties. From my unofficial count, I saw at least three non-calls against Tampa Bay and one against the Canes. Game changers? Who knows, but being at the game entitles fans to voice their opinions. The Canes pulled Ward with three minutes left, and the Bolts added an empty netter to close out the scoring.