Cary, NC – A $2 billion dollar infrastructure bond issue for North Carolina is on the ballot in this election. Let us know in the comments if you plan to vote Yes, No or Don’t Care.

You can download the detailed breakout of the NC Infrastructure Bond, sortable by item, amount, county and more.

And yet, March 15 is a strange day to pick for something you support. Voter turnout in the last presidential primary (2012) was 34%. Turnout in the General Election was 68%. (source: NC Board of Elections)

It’s almost like they don’t want you to vote :)

Donald Trump and Hillary Clinton are on the ballot in Cary, too. So is Jeb Bush, Martin O’Malley and a bunch of other people who never made it to the television debates. (Explanation: You can announce that you are withdrawing from the race, but that does not affect your status as a registered candidate on the ballot.)

So, you have a lot of choices. 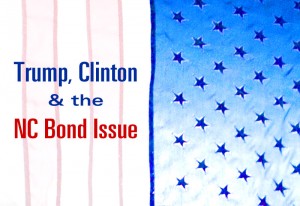 You can express your opinion on the bond issue in the comments. Vote:

Keep it polite and respectful. First time commenters have to await moderation, which can sometimes take a couple of hours. More info: Comments Policy.