Cary, NC — This was a busy week for me as is typical this time of year.

Monday I called council members to hear their concerns about the upcoming regularly scheduled council meeting on Thursday. I was able to contact all council members. They expressed questions and concerns about the Memorandum of Understanding with Wake County on the downtown library and the adjoining parking deck. Specifically the council members would like to review the parking deck design and the integrated art early in the process. Later in the day I met with staff to go over the agenda items. Since the agenda was short our meeting only lasted a few minutes.

Later Monday I met with the two Assistant Managers since the Interim Manager was on vacation. We discussed several items including development interests in downtown and Academy Street construction. Our meeting concluded after a few minutes.

Tuesday the council held a work session to discuss Cary Matters and Imagine Cary. Cary Matters is a council program that has monthly episodes played on Cary TV which is the town’s government access channel. The purpose of the program was to inform citizens about current issues. At the work session the council decided that updating and refreshing the eight year old program was in order. Changes will include a shorter program on a three week rotation. In addition the writing duties will be shared with all council members instead of alternating with Mrs. Robinson and me. The episodes will be around five minutes long (currently they average eighteen minutes) with two council members. Most of the show’s tapings will be indoors as before but some may be outdoors. They goal is to have these changes in place in about four months.

Imagine Cary was the next topic. We had planned to cover three special planning areas but were only able to cover one. The Carpenter special planning area was discussed for over an hour and a half. Basically, the council agreed with recommendations to protect the area and keep it historic and rural. The only change was to have major thoroughfares in the area include curb and gutter but with a non-traditional look. That look might include meandering paths, fences, stone walls, and more.

The council also discussed the timeline for the Imagine Cary process. To move our discusses along faster and get a proposal to the public sooner, the council decided to hold a half day work session before Memorial Day. Council was also notified that the final recommendation for the Eastern Gateway Special Planning Area will be presented to council in a staff report in the coming weeks. This special planning area will move ahead of the Imagine Cary but will be included in the overall plan. Our work session concluded after two hours.

Wednesday I met with the town’s Economic Development Committee. This committee is different from other town boards in that it is made up of the Mayor, two Cary Town Council members, the Cary Town Manager, the Cary Chamber’s President and Vice President of economic development, the chair of the Cary Chamber’s board of directors and three citizens. The committee oversees the activities of the Town’s economic development program and considers economic development initiatives that can be jointly implemented by the Town and Chamber. Most of the meeting is usually spent reviewing the quarterly report of the Chamber’s Vice President of Economic Development. Some of the interesting notes from this quarter’s report include:

The committee concluded its meeting within an hour.

Thursday the council held a regularly scheduled meeting. On the agenda was one public hearing and two discussion items. Both discussion items were approved unanimously. The first discussion item was the Legislative Agenda for this short session. Our agenda will include:

The second discussion item was a Memorandum of Understanding with Wake County for the downtown library and parking deck. Since the Cary taxpayers are paying over $7 million for a parking deck council wanted to make sure we had plenty of opportunity to review and decide on the design of the deck. After discussion items the council went into closed session on issues related to the town manager search. We adjourned our meeting around 8 PM.

Sunday I had the pleasure of welcoming runners at the beginning of the Tobacco Road Marathon and Half Marathon. This is the 7th year of this event and I am proud to say I have been at the start of them all. I have seen this grow from several hundred runners to thousands from about 35 states and all over the world. The course is flat and fast and is on the American Tobacco Trail for a good portion. I might even consider running a half marathon next year. 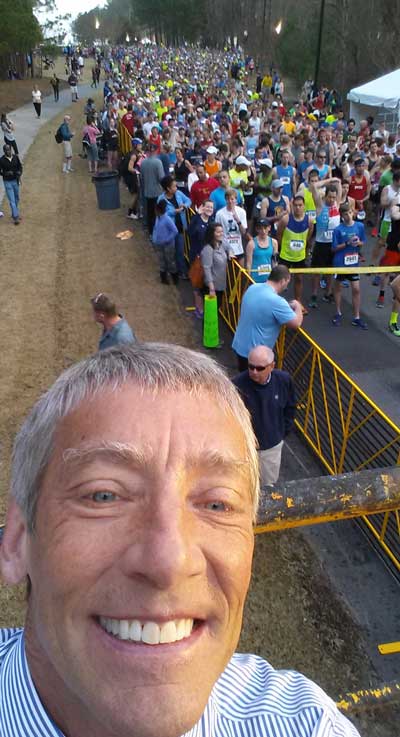 Sunday evening I had the honor and privilege of being present at the kickoff campaign event to re-elect former Cary Mayor Pro-Tem Gale Adcock to the North Carolina House. What a great representative for Cary. She will continue to be an advocate for working together to find the best solutions to all issues. As she says “I don’t cross the aisle, I work in it.” I am honored to know her and call her a friend.

Emails from staff this week included the development and construction activity report for the month of February. Notable items include:

In other emails from staff I was notified that after several months the intersection at Kildaire Farm Road and Walnut Street will be opened. This will relieve a lot of traffic headaches for downtown. Now if we can just get the rest of the project done…

I also received an email from Searstone retirement community this week. Through April 17th they will be receiving nominations for Ageless Heroes. The categories are as follows:

If you would like to nominate someone go to www.searstone.com/hero.

This week will be busy with a taping of Cary Matters, a presentation of the State of the Town address to Glenaire, a meeting of the Capital Area Metropolitan Planning Organization, an Arbor Day celebration, a leadership interview, events, and meetings.

Well, that is all for now. My next post will be on Sunday, March 20th. Although I have Facebook and Twitter accounts those are not the best means of communications with me. Please send all Town of Cary questions or comments to Harold.Weinbrecht@townofcary.org and email personal comments to augustanat@mindspring.com.