Jumpstreet, which is located adjacent to the Cary Towne Center parking lot, used to be a Harris Teeter. As a longtime Cary resident, I remember walking through that Harris Teeter many times. But, when I walked through the same sliding doors yesterday to check out the supermarket’s recent transformation into an indoor trampoline park, I couldn’t believe my eyes.

The rows of grocery shelves are gone, and, though the walls are lined with rows and rows of colorful trampoline courts, the middle of the building is completely open. This makes the interior look much larger than it did before. 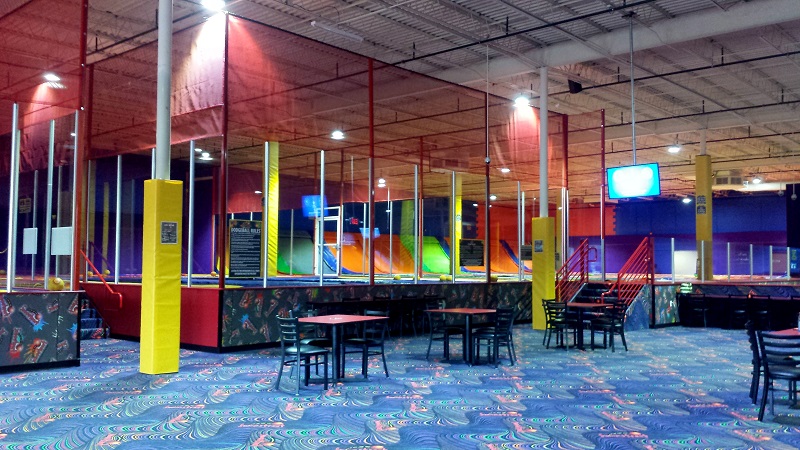 I barely recognized the interior – what do you think?

“It’s funny,” a staff member told me, “Because we have to go under the trampolines sometimes, and, when we do, we can see spots on the floor where the freezers were.” As it turns out, most of Jumpstreet’s 16 facilities, which are located across the United States, are built inside old grocery stores or large electronic stores – like Best Buy.

Heather Bowie, Jumpstreet’s Eastern Regional Manager, told me that, even though the building still has the same ceilings and walls, “we had to gut everything.” A large cement wall inside the building was knocked down, all new AC units were placed in the opened-up ceiling and the walls were repainted. All of the Jumpstreet trampolines and equipment were built in Denver, Colorado, where Jumpstreet is based, and the products were shipped here and set up for opening day. 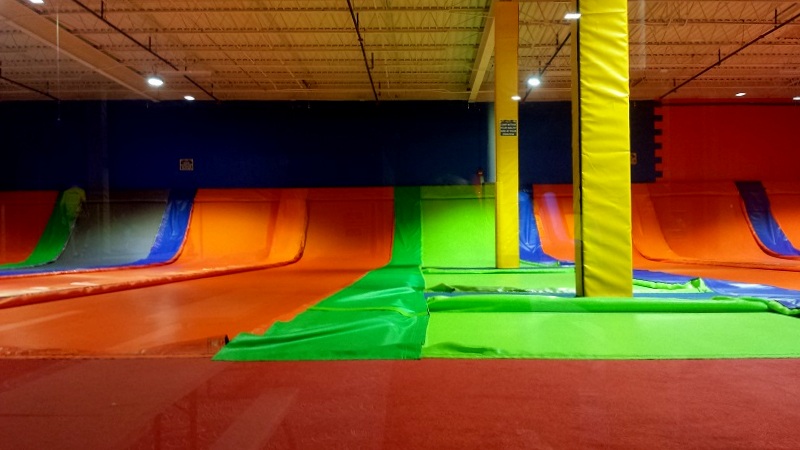 The main trampoline area for adults.

Because there is a large weight variation between young kids and older people, Jumpstreet features a special “Earthquake” zone for kids ages seven and under to help prevent injuries. There’s also a “dunk ball” station, where kids and adults can play basketball on a bouncy court, and two trampoline dodge-ball quarts that hold 30 people each. There’s also a mechanical bull, a “stunt jump” where people jump from a platform onto a large, inflatable bag to practice flips and other stunts, and a “walking stick” section, where participants can climb up a series of tall posts while they’re strapped to a harness. 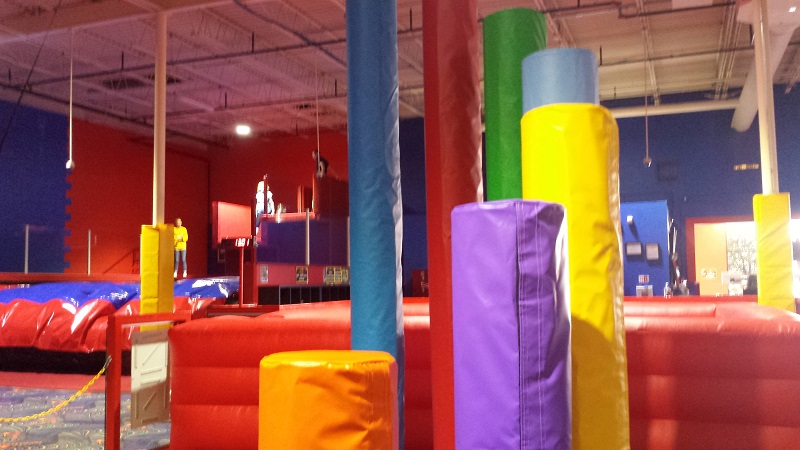 Is Jumpstreet just for kids? Not at all. “A lot of adults do it – it’s fun, and it’s great cardio,” Bowie explained. “You can burn up to 1,000 calories an hour if you jump the whole 60 minutes.”

There are plenty of seats available in the building for parents who don’t want to jump.

Though it doesn’t happen frequently, some people have been injured at indoor trampoline parks like Jumpstreet. For precautionary measures, each jumper is asked to sign a liability form before they jump. Trained attendants supervise each station, and Jumpstreet rules – like no diving and no running – are posted throughout the building.

Jumpstreet is located at 1111 Walnut Street and is open:

Jumpstreet Cary is offering CaryCitizen readers $2 off a jump session (per jumper). Just tell a staff member you saw this article! Regular pricing is as follows:

Children under age 3 can jump for $5 all day, seven days a week.

Restaurants: A Tour of Neomonde