Cary, NC — This week was a slow week with mostly small meetings and a few events.

Monday I met with staff to go over the Academy Street streetscape project. This project is now several months behind and if not finished by the end of June could result in penalties to the developer. To make up time the developer proposed closing Chatham Street and the Academy Street intersection for several weeks. To my knowledge this is not gaining any support from council and will probably not happen. While I would love to see this project move forward quicker it is not worth shutting down a major intersection especially if there are no guarantees from the developer that the work would be done sooner.

Later Monday I met with town management to go over issues. There are several issues related to new businesses coming to downtown. Hopefully those can be resolved and we can announce these new businesses soon.

Tuesday I met with the Ticket and Corporate Sales Executive for the Carolina Mudcats. He let me know that Sunday, September 4th would be Cary Community Night. I encouraged him to talk with the Chamber and other business leaders to help get the community involved. He also asked that I throw out the first pitch which I, of course, accepted. Although it is a long way off, I hope to see you there.

Wednesday I attended the ribbon cutting for Union Bank in Cary. This is the first branch location in Wake County.

After cutting the ribbon a DJ played while people enjoyed hors d’oeuvre, beer, and wine. I stayed about an hour before attending a private dinner with a guest from France.

Saturday morning I joined several volunteers and council member Robinson at a litter sweep at Panther Creek High School. The weather was drizzly at the beginning of the sweep and turned into a downpour about an hour into the sweep.

Although my crew was thoroughly soaked, we did manage to pick up several bags of trash. Most of which seemed to be fast food cups and packaging.

Thanks to all of those who participated throughout the day to help keep Cary litter free, clean, and green. And if you want to get involved in keeping Cary beautiful please contact Sarah Justice and Sarah.Justice@townofcary.org. 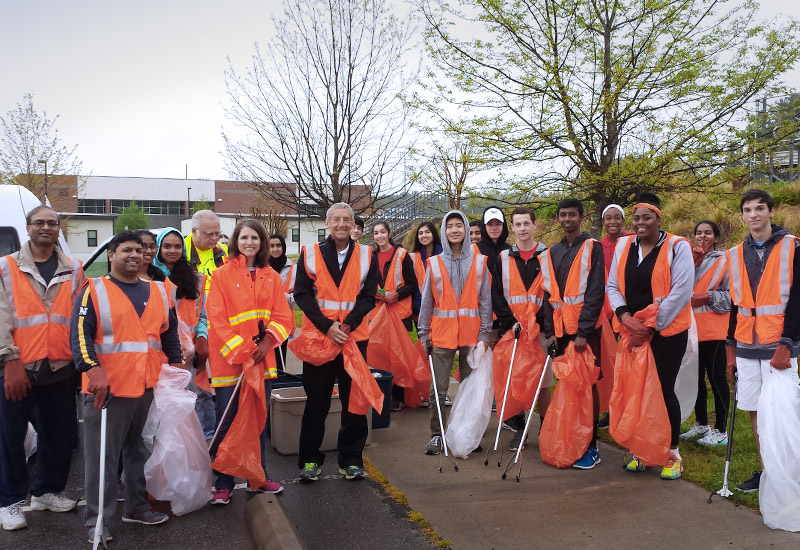 Except for a brief meeting with the town manager next week will be spent out of town on vacation working at the Masters Golf Tournament in Augusta, Georgia. So I won’t be posting a journal entry.

Well, that is all for this week. My next post will be on Sunday, April 17th. Although I have Facebook and Twitter accounts those are not the best means of communications with me. Please send all Town of Cary questions or comments to Harold.Weinbrecht@townofcary.org and email personal comments to augustanat@mindspring.com.