Raleigh, NC — The Canes beat the Rangers and celebrated Eric Staal in a home game on Thursday, March 31, 2016, but it all went downhill after that when they lost to the Jackets, sacrificing their spot in the playoffs, on Saturday, April 2, 2016.

Those in attendance at Thursday’s game against the Rangers had several treats.

The Canes finally beat the Rangers after losing the previous nine games against them in a stretch of over two seasons. Pat Brown scored his first career NHL goal, we witnessed a classy, moving and wonderful tribute to Eric Staal and, best of all, we saw a great game with many subplots that had a happy, exciting finish right up until the final horn.

During the first TV timeout, there was a fantastic tribute to Eric Staal that highlighted his time as a Cane from the day he was drafted to his first NHL goal, probably his best goal (against Martin Brodeur), raising the Stanley Cup and his All Star games, as well as one thing he did off the ice without fanfare – helping the community and those less fortunate.

Putting the Eric Staal drama behind them, both teams wanted this game for playoff reasons. If the Rangers won, they clinched a playoff spot. For the Canes to have any chance of making the playoffs, they must win all remaining games and hope the teams also in the Wild Card race play .500 or less in their few games left.

The Rangers are a very fast team, but, with the right lineup, the Canes can match speed with the best of them. The Canes went young and saw seven of the 19 skaters start the season with the Checkers. There were another two former Checkers on the injured list. Whether it was adrenaline with all the young players, the emotions of the Staal return or just the urgency of winning every remaining game, the Canes completely dominated the first period.

They had seven quality shots before the Rangers got their first, and, as the drama unfolded, it was Eric Staal getting the Rangers’ first shot, but his good friend Cam Ward made a great save, flashed a big smile and possibly said dinner was on him, as there may have been a friendly wager placed earlier that day. Midway in the period, as the Canes were in the middle of a line change, Jeff Skinner got a pass right at the red line and spun around sending a hard pass off the far corner glass as he was seeing rookie Pat Brown, in his second NHL game, jumping over the boards. 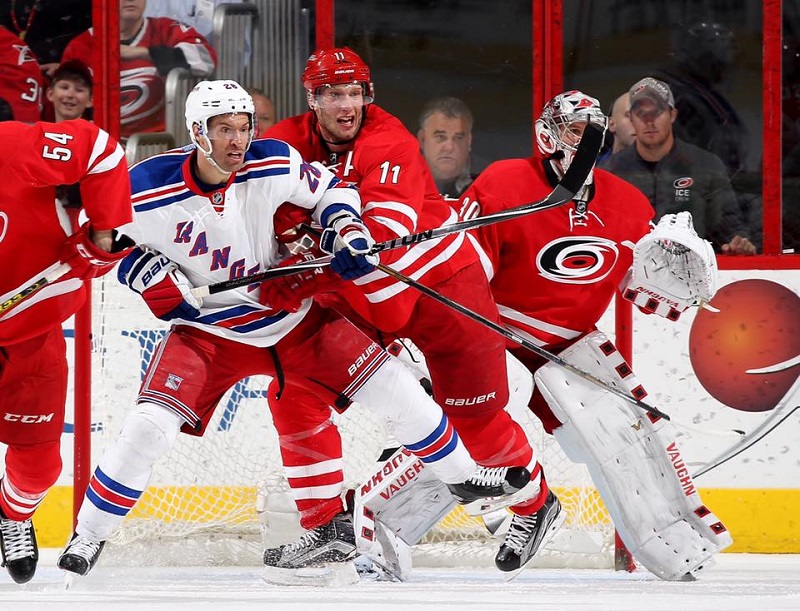 Brown raced towards the flopping puck that bounced off the glass and timed the shot perfectly, just as the puck was laying flat, then sent one in near side past one of, if not the top goalies, Henrik Lundqvist.

The Rangers regrouped in the second, dominating the play. Mats Zuccarello scored early, bringing the large number of Ranger faithful in the stands to wake up. Less than four minutes later, Rick Nash showed why he’s a beast on ice, as he had the puck on the left wing and came down hard with Brett Pesche on him like a blanket.

Somehow, Nash was able to shake off Pesce and shoot at the same time just as both players fell sliding to the boards with the puck going high glove side past Ward for a 2-1 Ranger lead.

Later in the period, Sergey Tolchinsky, who was playing in his first NHL game, dropped a pass to Justin Faulk on the right point. Faulk sent a hard wrister 3’ off the ice towards the net with more traffic than 5th Avenue that found its way in the net to tie the game. Late in the period, Ron Hainsey got called for holding that was so unbelievable that all Hainsey could do after play stopped was stare in disbelief at the ref. That penalty proved costly, as the Rangers scored on the powerplay despite the Canes’ penalty kill being #2 at home in the NHL.

Like most top teams in the NHL and the Rangers are certainly a top team, and having a lead going into the third period usually means a ‘W’ after 60 minutes. But tonight was full of drama. Both teams dug down deep, skating hard, finishing checks – and EStaal was credited with three hard hits on the night, playing tight and getting off quality shots.

Rookie Brown had the puck in the low corner passing up to Ryan Murphy at the right point. Murph saw his OHL teammate; Skinny, going to the dirty area of the crease then sent a hard slap pass right to Skinny’s tape. Skinner turned the blade of his stick at the perfect angle, sending one over King Henry’s shoulder to tie the game.

Just under midway in the game, with the Canes of the powerplay, the Rangers lifted a puck high to clear the zone, but Faulk caught the puck like an outfielder, stealing a homerun over the wall and bringing the puck to the ice, sending it to the net as that 5th Avenue traffic was back. Faulk put the puck on the ice and passed to Victor Rask (who was open on the left side). Rask passed cross-ice to Elias Lindholm who quickly passed back to Faulk.

Faulk sent a hard slap shot to the net with Jordan Staal in front. Lundqvist made the save with the rebound going right to Rask who had an open net to put the Canes up 4-3 that would be the game winner. Adding to the drama, the Rangers called for a Coaches’ Challenge on the goal for potential offsides, but, as so many challenges go, it was ruled as the officials called it. The Caniacs and the Ranger fans in attendance saw a great and exciting finish that went down to the last second. It was a great night all around – great to see Eric in his return, great to see a good crowd and great to see the Canes win.

The only folks who saw this one coming were the ones who made the bus trip from Ohio as the Columbus Blue Jackets blew the Canes’ ever-so-slim chance of making the playoffs by salvaging their only win against the Canes with a 5-1 blowout win.

Just as they did the game before, the Canes came out of the gate with a purpose. They all knew what was on the line – a loss in any of the remaining three games and the season was over. As in the electric game against Eric Staal and the Rangers two nights earlier, the Canes again had the first seven shots on net before the opponents got their first.

Just under the nine minute mark, Jaccob Slavin passed to Victor Rask at the Canes’ blue line. Rask danced around a couple of defenders then sent a pass behind Skinner just as he was approaching the Jackets’ blue line. Skinny stretched his stick with one hand to tap the puck behind him as he crossed the blue line. As Skinny was trying to get better possession, defender Cody Goloubef closed on Skinner with the intent to push him off the puck.

Skinny tapped the puck in front of his skates, did his patented side skate move around Goloubef and took a couple of strides while Seth Jones tried to defend before Skinny sent the puck low far side for another impressive goal. With the goal, know the Canes dominated the Jackets in the three previous games and how the Jackets are one of the worst teams this year, the Caniacs felt good about how the night would turn out. The Canes continued to dominate until a little over the 14 minute mark. 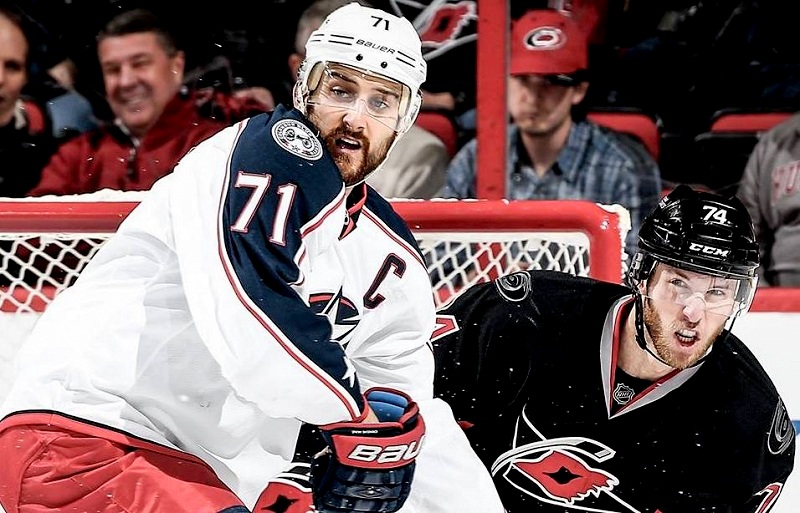 The Canes were in the Jackets’ zone and were maybe feeling too confident based on the Jackets’ record or the Canes success against them this season, but play started going downhill. First, there was a bad pass to Jay McClements up at the right point. McClements immediately tried to pass to Noah Hanifin, but the pass was weak that allowed Brandon Saad to intercept for a breakaway that beat Eddie Lack. Call that the turning point of the game, as it was all Jackets after that.

Another First Against the Canes

Saad scored his second of the night after speedster Sonny Milano circled the net with Hanifin all over him going stride for stride. Saad, having a “get it in the net” mentality, went to the crease and, with the missed coverage, was wide open to receive the pass and have another easy goal. Late in the period, Alexander Wennberg went low in the Canes’ end, dumping the puck to the crease. Saad, with that same get it in the net mentality, again went to the net, and, on another miss, coverage tapped it in for his first career hat trick. With just .1 second left in the period, the Jackets scored on a 5-3 powerplay that just can’t happen. It was the worst period of hockey for the Canes in months and couldn’t have come at a worse time. Despite being down 4-1, the Caniac faithful, knowing what was on the line, still believed their team had it in them for a comeback.

The Canes started the third with the sense of urgency they needed to have. They killed the last half of a penalty to start the third then started getting shots on the Jackets’ net. Shots are shots, and anything in the NHL is possible, but quality shots have better chances, and the Canes just couldn’t muster any quality shots. Getting two passes in a row were rare, the tight checking evaporated, and the hitting was a forgotten event. Just over the 10 minute mark, the Jackets scored again on what was turned out to be the true end of the Canes season as there was no way the Canes were playing that they could overcome a 5-1 deficit. With the loss, the Canes are officially out of the playoff Wild Card race.

The auditions of the many Checkers that were in the line-up were great to see. The Checkers had a very good season, and there are some that could make the Canes next season. Coach Bill Peters had three Checkers start the game, and that threesome could very well be the Canes’ 4th line next season. GM Ron Francis has some serious business decisions up to and through the draft in June. The team has had a need for the past three years for additional scorers. That has to be his #1 choice. With so many players on both the Canes and Checkers as free agents, Francis will certainly earn every penny before the team reassembles in September. Keep reading CaryCitizen over the summer for updates.

The last home game of the season is Thursday, April 7, 2016 against the Canadians. If the Canes do what they did in the past, free hats will be given out. Be there!