Cary, NC — The Carolina RailHawks opened the 2016 regular season with a strong 2-1 home win over Minnesota United on Saturday, April 2, 2016. The win kicks off the franchise’s 10th anniversary season in ideal fashion.

“We didn’t start the game well, but our response was absolutely tremendous,” said RailHawks Head Coach Colin Clarke. “We had two great goals and a lot of opportunities. Now we’ll get ready for next week and keep our feet firmly on the ground.”

The RailHawks entered the game and relentlessly pressured Minnesota United’s defense, nearly scoring on a first-minute header by Austin da Luz. Minnesota United struck first, though, as Christian Ramirez netted a half-volley off of a ball sent forward by Damion Lowe.

The RailHawks scored their first goal of the regular season and retook the match’s momentum in the 13th minute. Alex Pérez sent a long ball forward to Tiyi Shipalane, who caught Minnesota United goalie Sammy Ndjock off his line and coolly chipped the ball over the keeper’s head. The RailHawks continued to control the first half and seized a 2-1 lead in the 26th minute.

Kareem Moses carried the ball up the right wing and sent a cross to the far post, where Austin da Luz executed a clinical header to put his squad on top. 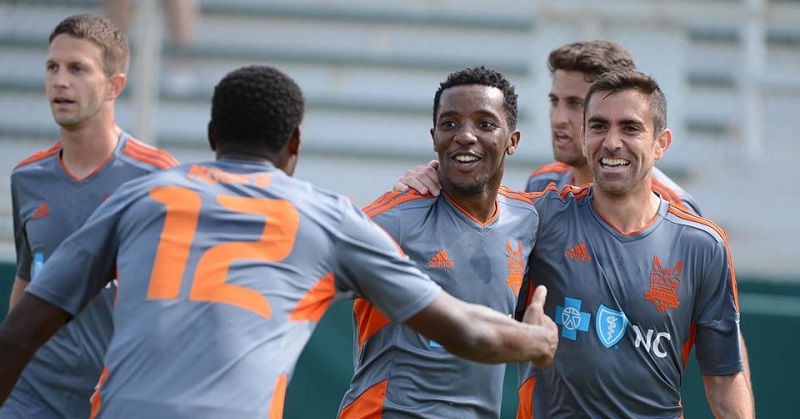 The teams battled for control in the second half, trading attacks and corner kicks but failing to break through. The RailHawks refused to let go of their home-opener win in the face of continuous Minnesota United pressure, though.

The back line hunkered down behind Connor Tobin and Paul Black to protect the lead until the 90th minute, securing the RailHawks’ 2-1 victory.

The RailHawks will look to spur a win streak when they travel to the Miller Stadium to take on new NASL side Rayo Oklahoma City on Saturday, April 9, 2016. The squad returns home to host Ottawa Fury FC at WakeMed Soccer Park on Saturday, April 16, 2016 at 7:30 pm.

Story By Mauricio Villarreal of the RailHawks. Photo by the Carolina RailHawks.