Raleigh, NC — It was a sad evening on Thursday, April 7, 2016 when the Carolina Hurricanes lost their last home game of the season to the Montreal Canadians.

The Carolina Hurricanes had a great opportunity to end the home schedule on a positive note – they could have finished with 20 home wins for the first time in forever, and Jeff Skinner could have, with a really good night, scored his 30th goal in front of the home crowd. The Canes could have improved their record/point total by 17 over last season, but the Montreal Canadians spoiled everything.

Another Game of Firsts

The Canadians were the hottest team in the NHL at the beginning of the season, which came somewhat as a surprise to many hockey pundits but not to any Hab fans. After all, they have one of the best goalies in the league, Corey Price, along with one of the best and most charismatic defenders, P.K. Subban. Price has been out since November, and Subban has been out about a month, but, after the torrid start, the Habs have been one of the worst teams in the NHL. 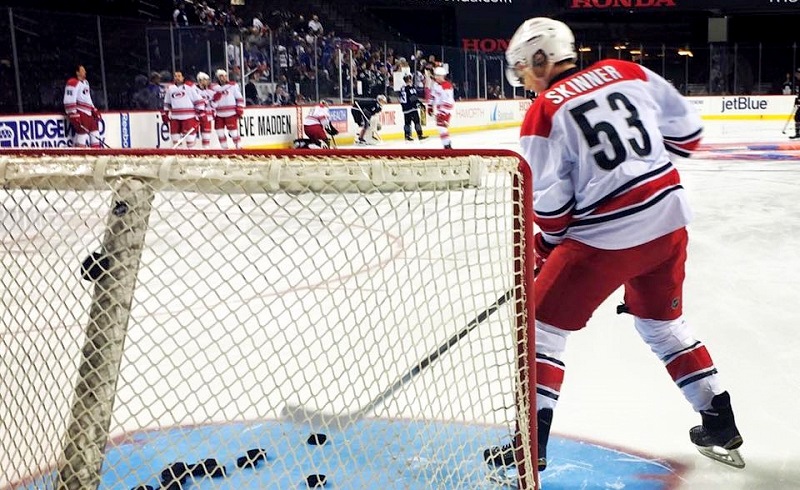 Coming into Raleigh, they sported a two-game losing streak, and, like the Canes, had about a third of their line-up with minor leaguers. Their goalie, Charlie Lindgren, was playing in his first NHL game and was playing college hockey just two weeks ago. Looking back two weeks ago, when the Canes still had their slim playoff hope, this game on paper was one in the ‘W’ column.

Whether it was trying to end the home schedule with a win, building on the momentum from the SO win in Boston earlier in the week or wanting to jump on the rookie in net, the Canes did dominate the game early.

Picking on rookies is a tradition in most sports.  As it’s customary in the NHL to have the starting goalie lead the team on the ice, the Canadians’ rookie, Lindgren, was first on the ice. As he skated up to the blue line then circled towards the net, he realized his teammates were still in the runway laughing and raising their sticks allowing him to skate around for a minute before being joined by the rest of his good buddies.

Early in the first period, the Canes had the puck deep in the Habs’ end when Jeff Skinner intercepted a clear along the half boards, sending a centering pass to Riley Nash.

Nash wasted no time in sending a hard-wrister high glove side for a very quick 1-0 lead. It’s not often that a goalie has a .000 career save percentage, but, as World B next to me said, that can only go up from here. The score held up until very late in the period, as the Canes allowed another first when Darren Dietz received a drop pass at the right point. Realizing he was unchecked, he took a few strides towards the net with his stick up-cocked in the shooting position, finally shooting when Cam Ward was completely blocked with traffic, sending his first NHL goal far side to tie the game.

Noah Hanifin, still living the dream with his SO goal against his hometown team, the Boston Bruins, two nights earlier, put the Canes ahead with a nice slap shot from the left point for his 4th of the season.

Hanifin’s defense, along with several other rookie D-men on the Canes, is very impressive. His skating is among the best on the team, whereas shooting is probably where he needs the most work.

Word has it he’s been working with a shooting coach, and what he’s showing at the end of the season is much better than the beginning. He is one of the reasons the future for the Canes is extremely positive. That goal would be the last lead for the Canes, as it was all Canadians after that.

Max Pacioretty skated through the center zone, killing time as the Canadians were making a line change. As he crossed the blue line, two defenders closed in on him, so he took a hard shot from 45’ out. Ward punched at the puck with the blocker with the puck mimicking a bunt single as it popped over Ward into the net to tie the game.

Late in the period, the Canadians made a rush into the Canes’ end. Brad Malone blocked a shot, but the puck trickled wide where Daniel Carr had an easy redirect for the 3-2 lead.

Wait Until Next Year

While the Canes were down 3-2 to start the third, the Caniacs tried to jumpstart the Canes, as they knew this was the last game at the PNC arena for six months and really wanted a win.

Play on both sides was sloppy with turnovers in the neutral zone all too common. Shot selections were poor, with the Canes’ best chance coming off a flurry of shots with Skinny getting last licks from a bad angle that few players can make, but the rookie goalie smothered the shot with a glove save, resulting in Skinner looking up in frustration. Lars Elder scored just over the 15 minute mark, sealing the game and shutting the door on the Canes’ 20 game win mark at home.

The Canes have a handful of draft picks this year, with two first round and two second round picks.

The Canes immediate need is a forward that can consistently put the puck in the net. Keep reading CaryCitizen for future articles on the draft, trades and the ever so fun signing speculations. Thanks for following this season, and, as the sports fan and critic Tony Helms always says, “Better days are ahead.” Go Canes!