Cary, NC — The Cary Players finish the 2015-2016 season with their most ambitious musical production yet, “The Wizard of Oz.” The show starts this Thursday and runs for two weekends at the Cary Arts Center in downtown Cary.

Cary Players newcomer Emily Gautier plays the role of Dorothy with veteran actors Ran Northam as Scarecrow, Daryl Ray Carliles as the Tinman and Mark Taranto as the Cowardly Lion helping her down the yellow brick road. 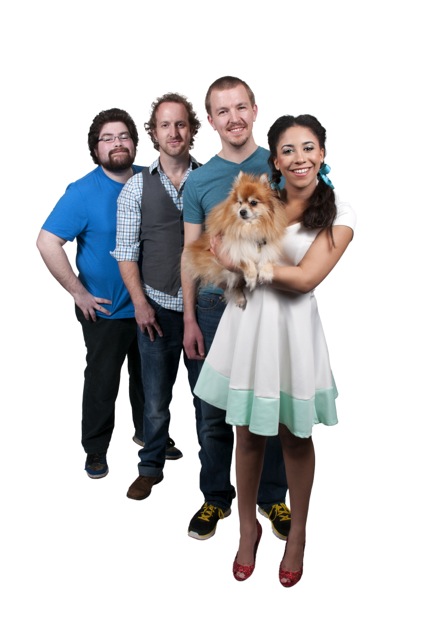 From left to right, Mark Taranto as Lion, Daryl Ray Carliles as Tin Man, Ran Northam as Scarecrow, Emily Gautier as Dorothy, and Roo as Toto.

Along their way, they encounter a host of munchkins, ozians, enchanted trees and flying monkeys as they eventually meet both the Wizard of Oz (played by Thad Bell) and the Wicked Witch of the West (played by Sharon Galluzzo).

There are 45 community members in the cast.

The show runs for two weekends, April 15-17 and 22-24, at the Cary Arts Center in downtown Cary and includes some extra treats during the run.

The organization partnered with the Town of Cary on some fun promotions leading up to the show.

“The town came to us and wanted to do something big together,” said Dan Martschenko, founder and president of Cary Players. “What could be bigger than one of the most beloved stories of all time?”

The town is planning a series of events leading up to the show, including a Selfie Booth at the Cary Arts Center, an Oz Trivia Contest, a Storytime with Dorothy and Toto, a Tin Man Food Drive to benefit Dorcas Ministries and a Munchkin Raffle.

There will even be a Lions, Tigers and Bears art class in which little ones can create their own Toto to take to the show.

The Cary Theater down the street showed the classic film The Wizard of Oz last weekend.

Ticket information is available at www.caryplayers.org or at the Town of Cary box offices located at The Cary Theater and the Cary Arts Center. Tickets are $20/adult, $18/senior or student and $17/each for groups of 20 or more. Special pricing of $15/adult and $10/child (12 and under) is available for the Interactive Family Show on Saturday, April 23, at 3:00 pm, but tickets are limited.

For showtimes and tickets, visit the Cary Players’ website.