Monday started with meeting the two Assistant Town Managers to go over current items. Most items were follow ups from previous conversations.

Later Monday I joined all the mayors in Wake County at our monthly Wake County Mayors Association meeting. The meeting started with a presentation from WakeMed, Duke Health, and UNC Rex Representatives. The purpose of their presentation was to get the Mayors Association and municipalities to consider adopting a resolution in support of healthcare. The resolution stated that encouraging the Wake County delegation to act on behalf of businesses leaders, and in turn support healthy communities, will allow providers like them to continue to deliver high-quality, accessible health care. Our meeting concluded after about two and a half hours.

Tuesday the council met for two quasi-judicial public hearings. The first hearing was to consider an exception for two required access points for the subdivision located in Chatham County. I along with majority of the council agreed to this exception because a subdivision to the south, that has already invested $7 million, will be required to make the connection to this subdivision to complete their project. So it appeared the exception will be temporary. The second hearing was whether or not to allow a storage facility on highway 55 in the Carpenter Historic District.

Although this was approved by the majority of council, I voted against it because I felt there were much better uses than having another storage facility along highway 55. It’s unfortunate, that the Highway 55 part of Cary is becoming so industrialized. In my mind we need to have better vision in this area.

Tuesday morning I did an interview with PBS News Hour on the topic of HB2. This was the full blown interview with two cameras and a producer. They even powdered my nose. After the setup we talked about HB2, the impact on Cary, and what we are doing to mitigate the impact. We also talked about the demographics and economy of Cary. The interview is scheduled to air next week.

Wednesday afternoon I attended a meeting of the Capital Area Metropolitan Planning Organization’s executive board. CAMPO is a federally mandated planning organization responsible for the continuous and comprehensive transportation planning process in Wake County and parts of Franklin, Granville, Harnett and Johnston Counties. CAMPO is responsible for carrying out an annual work program that includes updating the Metropolitan Transportation Improvement Program (a seven-year project programming schedule) and the Long-Range Transportation Plan (a minimum twenty-year forecast of projects and programs).

At this meeting there were two items of interest to Cary. First, the board approved a required letter which would allow Cary to request a TIGER grant for the Walker Street tunnel project under the railroad tracks. TIGER (Transportation Investment Generating Economic Recovery) is a supplementary discretionary grant program included in the American Recovery and Reinvestment Act of 2009. Beginning with the Recovery Act and continuing through the Fiscal Year (FY) 2016 appropriations processes, Congress has provided DOT with eight rounds of competitive grants totaling nearly $5.1 billion for capital investments in surface transportation infrastructure. Since 2009, the TIGER program has awarded 381 projects in all 50 states, the District of Columbia and Puerto Rico, including 134 projects to support rural and tribal communities. Applications for the eight round of TIGER grants are due on April 29, 2016. The town believes that the Walker Street project scores well for this grant.

The meeting also included a public hearing on rail crossings from Raleigh near Meredith College to Maynard Street in Cary. This plan for the crossing changes are unfunded and will likely remain that way for years. But this plan is important because it will dictate how future development around those areas is allowed to proceed. The board approved the staff’s recommendation after hearing concerns from several attendees.

After the CAMPO meeting I met with two artists who are planning integrated art for the downtown parking deck which will be next to the downtown park and new library. They had a lot of great ideas and are meeting with council members to hear about their vision and their concerns. I am looking forward to what concepts they bring back.

Wednesday evening I attended a political meeting of one of Cary’s legislators. It is important to keep in touch with our delegation and establish a relationship so that they better understand the town’s needs.

My last event Wednesday was a private dinner.

Saturday I attended the Children’s Day Festival celebration at Sertoma Amphitheater. This was put on by the American Turkish Association of North Carolina and Sister Cities. I gave remarks and read a proclamation before visiting the booths at the event. The event was so crowded that parking was a problem but it was a great event none the less. The event coordinators are looking at different locations for next year. 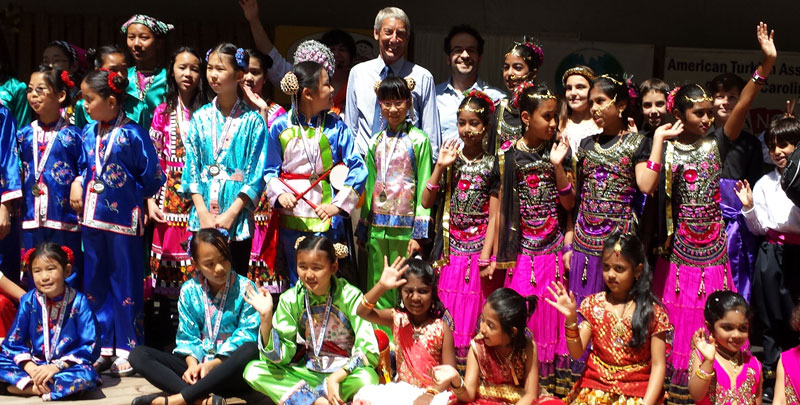 Saturday afternoon I attended the ACC Tennis Championships semi-final matches at the Cary Tennis Park. The most exciting match was #1 nationally ranked Virginia against #3 nationally ranked North Carolina. Virginia rallied from a 3-0 deficit to win 4-3. The matches were announced by Patrick McEnroe on ESPN3.

Saturday night I had the joy of attending a dinner with ACC officials, Patrick McEnroe, and other USTA board officials. McEnroe told stories of the times when he was playing and coaching in the Davis Cup. Now he spends his time announcing for ESPN and working with the USTA. It was great to have him in Cary and he was very gracious with the dozens of fans who asked for pictures and autographs.

I received lots of emails this week about my personal comments on HB2. Almost all shared by beliefs and one adamantly opposed my comments with multiple emails arguing in favor of the legislative majority. The reason for the multiple emails was to help me “understand concerns other than your own.” Yep, I think I got that the day the legislative majority passed HB2. Thanks though.

Next week will continue to be busy for me. Activities include two chamber events, a long work session on the Imagine Cary planning, a regularly scheduled council meeting, and other meetings.

Well, that is all for this week. My next post will be on Sunday, May 1st.  Although I have Facebook and Twitter accounts those are not the best means of communications with me. Please send all Town of Cary questions or comments to Harold.Weinbrecht@townofcary.org and email personal comments to augustanat@mindspring.com.