Cary, NC – Out of the 18 Wake County schools that received awards from Advocates for Health in Action (AHA), five were schools in Cary.

Both Davis Drive Elementary and Penny Road Elementary got the AHA Brains and Bodies Award in the top “Gold” category. The award aims to recognize schools that “create a sustainable culture of school wellness.”

“More than 43 percent of kids aged five to 11 in Wake County are overweight, and we want all kids to be healthy and feel great,” said AHA Director Sara Merz. “Our Brains and Bodies Award winners are making a real difference in the health of kids in Wake County by changing practices and policies.”

All of the AHA awards, given out Wednesday, April 27, 2016, are based on criteria set out by the nationally-recognized Alliance for a Healthier Generation “Healthy Schools Program.” 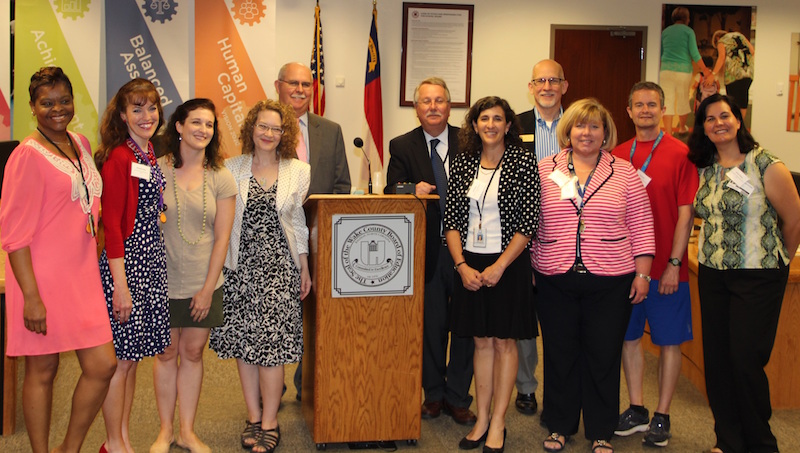 Representatives from the Cary elementary schools that received the AHA wellness awards.

Regular Exercise for Every Student

AHA also awarded the Sneakers and Spokes Award, which recognizes schools’ efforts to get students to walk or bicycle to school, or exercise while at school events. Formerly known as the Wellness Star Award, this recognition is based on the idea that students need at least 60 minutes a day of physical activity.

Farmington Woods Elementary and Highcroft Drive Elementary both received the Sneakers and Spokes Award, as well as Davis Drive and Laurel Park.

Story by staff reports. Photo courtesy of Advocates for Health in Action.