Cary, NC – This week was full of events and included a regularly scheduled council meeting.

Monday I contacted all council members to hear their concerns and questions about the regularly scheduled council meeting for Thursday. There were only minor clarification questions. Later Monday I met with management, administration, legal, public information, and other staff to review the agenda items. The meeting was rather short since there were no public hearings and only two main discussion items. I predicted at the time that the meeting and the closed session would last about an hour.

After the agenda meeting I met with the Deputy Town Manager, and Assistant Town Managers to go over current issues. We talked about the Academy Streetscape project. The Dry Avenue section should be completely opened on Monday and the Chatham Street intersection will start seeing closings on Monday. We also talked about the state property and the hotel/motel tax.

Wednesday I gave remarks at the Senior Tennis Appreciation Day held at the Cary Tennis Park. I then joined the pro and two citizens in an exhibition. It was a lot of fun and Cary is blessed to have such a great facility.

Wednesday I participated in a meeting of the Cary-Morrisville Joint Issues Committee. Here are some of the notable items from the meeting:

Thursday the council held a regularly scheduled council meeting. There were 21 consent items, no public hearings, 4 discussion items, and a closed session for two items. The public speaks out portion of the meeting had several speakers in opposition to the proposed Carpenter Village rezoning.

Under discussion, the item that created the most council conversation was the proposed land use amendment and rezoning to allow a storage unit behind Mayfair Plaza (old Kmart site). Both were voted down by council with the majority of council members wanting it to remain part of the plaza in hopes of seeing that plaza redevelopment. As one council member put it “in a few years this could be the gateway to downtown”.

The closed session, which can’t be discussed, included an economic development opportunity and a personnel matter on the town manager position. We are continuing the process of learning about candidates for the town manager position and are excited about finding out more about them in our pursuit to determine who would be the best fit. Our meeting concluded after about two hours.

Friday I participated in a meeting of the Metro Mayors to hear the weekly legislative update. Topics for this week included the NC House budget which is expected to go over to the Senate next week, a bill to limit the length of the short and long sessions, a bill to punish cities that continue to be sanctuary cities, and discussion about sales tax redistribution. The meeting lasted about 20 minutes.

Saturday started with remarks to about 100 people participating in the Purple Cloth 5K race. This is the 5thannual event and I have been lucky to attend them all. The purpose of the event was to raise money for Dorcas ministries. Dorcas is a Cary non-profit with a mission to provide crisis relief to area residents who seek stability and self-sufficiency through food and financial assistance, scholarships, training programs, referrals and an affordable thrift shop. After giving remarks I put on a number and ran the race. I finished right at 26 minutes. My time was 18th overall and 2nd in my age division. 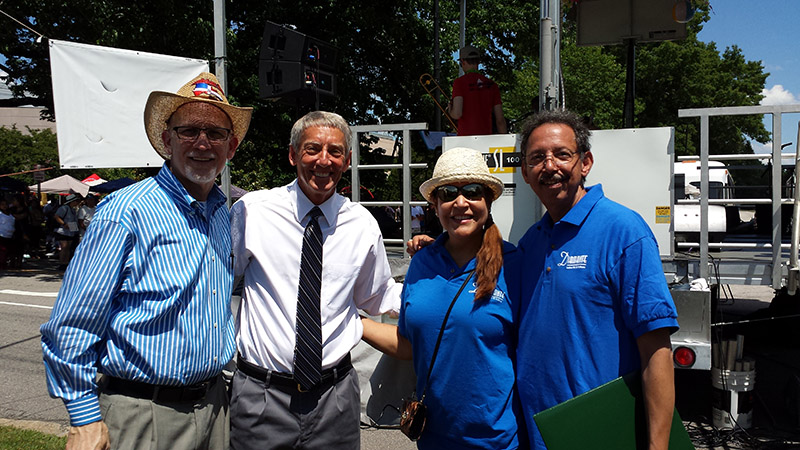 Cary Mayor Harold Weinbrecht at the Ritmo Latino event with Cary town councilmember Ken George, a member of the Diamante board and Diamante President David Flores.

Later Saturday I attended the 12th annual Ritmo Latino event in Cary put on by Diamante. Ritmo Latino means Latin rhythm which fits with Diamante’s mission of preserving, developing, and promoting of the culture, heritage, and artistic expressions of the diverse Latino/Hispanic population in North Carolina.

I gave remarks along with council member Ken George who translated. We had fun with the translations. Then we surprised WRAL’s Leyla Santiago by asking her to translate the proclamation that I read. She did a fantastic job and was a great sport.

The event was a great time of music, dance, food and fun and seemed to be enjoyed by everyone.

Mail items this week included a letter that I sent to the Mayor of Raleigh and the Chairman of the Wake County Commissioners about the Hotel/Motel tax. Basically, money is collected from municipalities and pooled to create and help venues promote tourism. The convention center in downtown Raleigh is an example of how this money is being used. Over the years Cary has received less than what it has collected which was the reason for my letter. Here is that letter:

Thank you and congratulations on creating on open and informative process to review the Interlocal Agreement for the Occupancy and Prepared Foods and Beverage Tax. Good Information has been shared, which has been extremely helpful for our Town staff, many of whom are new to the process. We are excited about the revenue outlook and the opportunity to do new things to enhance the region, and we are confident the Town of Cary can continue to play an important role in the effort’s overall success and economic impact.

As you continue with the significant work that lies ahead, we thought it might be helpful to share observations for your consideration as the process continues.

While we agree that the dedication of the remaining 85 percent of the available funds to support the Convention Center was needed to fund and start the new facility, now that this has been accomplished, we believe a new model needs to be investigated for the future. As revenues have increased faster than inflation and are projected by the model to be similar going forward, it is not clear whether continuing the high level of funding using a fixed percentage is either necessary or appropriate. Our recommendation and request is to look at all qualifying contributing facilities’ needs for continued support to establish a fair, balanced, and holistic plan. As you know, many Wake communities, including Cary, have contributing facilities that also need attention. One of the more significant issues we are currently facing in Cary is the seemingly constant improvements needed to keep the WakeMed Soccer Park competitive for tournaments while also serving the needs of the Carolina RailHawks, now under new ownership/management. For a frame of reference, a quick summary of anticipated needs includes:

The second point I would like to raise is the Business Development Fund. While this has been a popular and worthwhile program, it seems inequitable to continue focusing solely on the Convention Center. The need to cover costs to attract certain events exists across all of the venues in Wake County. Many of the tournaments and events in Cary have similar challenges. We would welcome a discussion about which types of events and facilities could be eligible followed by the appropriate funding level.

Finally, I want to raise an issue about operations costs. None of the Cary’s facilities generate revenues adequate to cover all operations costs, although some perform better than others. I understand that the Session Law allowing for the levy of the tax has limitations. Still, a discussion about ways to manage operations costs could be worthwhile. Just understanding the experience of others could be helpful. Our current annual sport venues subsidy is roughly $1.6 million.

Having served the citizens of Wake County beside you for many years, I know firsthand your commitment to work in partnership toward a better future for all our citizens, which is why I’m so optimistic about the outcomes that would come from our discussing these items. Please also know that in addition to talking about these important points, Cary does plan to submit new projects for funding consideration at the appropriate point in the process.

The Town of Cary looks forward to a continued bright economic development outcome through use of these funds.

I look forward to working with Raleigh and Wake County to expand and promote our venues to everyone’s benefit.

Emails from staff this week included the construction and activity report for April. Here are some of the items of interest:

To view the interactive development map go to http://www.townofcary.org/Departments/Planning_Department/InteractiveDevelopmentMap.htm.

Another email from staff this week included interesting information about Cary’s residential makeup. So in case you were wondering Cary has:

Staff noted that some developments combine to make neighborhoods. That is, a neighborhood may be made up of townhomes, single family residential, etc.

Next week’s activities include staff meetings, a special called meeting of the council, and a meeting of the Capital Area Metropolitan Planning Organization.

And on a personal note the Weinbrecht’s are excited that our youngest daughter got engaged this week. Congratulations Cara!

Well, that is all for this week. My next post will be on Sunday, May 22nd.  Although I have Facebook and Twitter accounts those are not the best means of communications with me. Please send all Town of Cary questions or comments to Harold.Weinbrecht@townofcary.org and email personal comments to augustanat@mindspring.com.