Cary, NC – The latest Cary Town Council meeting (May 12, 2016) brought the recommended operating budget for 2017 to the council members’ desks, saw disagreement over a proposed storage site on SW Maynard Road and recognized some of the town’s staff members who work behind the scenes.

Note: At-large Representative Lori Bush was not in attendance at this Thursday, May 12, 2016 meeting.

Interim Town Manager Mike Bajorek said this year’s recommended operating budget is $227.8 million, which is a 4.5 percent increase from the fiscal year 2016 adopted budget. The budget follows what Bajorek said were his goals, including getting a balanced budget without any tax increases and directing funds to try and improve communication between town departments.

“This lays a foundation for us to do that,” Bajorek said.

Included in the budget is the proposal to lower the tax rate from 37 cents on the dollar to 35 cents while also increasing the water utility bill; a household using 5,000 gallons would see their monthly bill increase by 3.8 percent.

Much of the discussion items time was spent on proposed rezoning of a patch of land between SW Maynard Road and Rose Street. The land is question is inside the Mayfair Community Activity Center and is designated as low density residential and commercial but there was a plan to have it rezoned as light industrial so a storage center could be built.

Planning and Zoning Board Chair Mark Evangelista said the board recommended denying the rezoning and council members agreed, particularly when it came to the “industrial” zoning and its proximity to a neighborhood, suggesting manufacturing could take the spot if the storage center went out of business. It was denied unanimously. 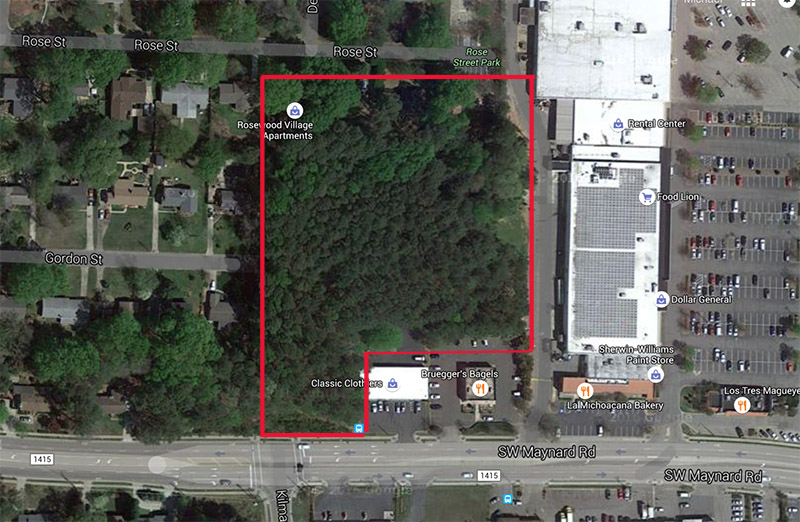 The proposed site of the storage site off of SW Maynard Road. Council voted to deny the rezoning.

The same site came up again in the meeting but this time the rezoning was for Industrial Conditional Use, restricting the kind of development so it was more likely that only a storage facility or a similarly sized business could be there. Residents in the surrounding area also said they approved the site.

While Councilmember Don Frantz supported the rezoning, saying developers had been “sympathetic” to neighborhood concerns and found ways to reduce noise pollution and traffic, the rest of the town council was not on board.

“It would kill the connectivity to Mayfair Plaza,” said Councilmember Ken George, pointing out how this area can be the entrance to Cary.

Other councilmembers had similar sentiments, though many said it was a hard decision to make. Councilmember Jennifer Robinson said she did not think it would be a good transition for the area and also brought up aesthetic concerns.

“Mansard roofs are so incredibly ugly,” Robinson said. “It’ll be like lipstick on a pig.”

The town council voted to deny the rezoning with only Frantz opposing.

Also in the meeting’s discussion items, council unanimously approved a sublease for the Carolina RailHawks at Wake Med Soccer Park.

At the start of the meeting, four community members came before the Cary Town Council to speak about the development in Carpenter Village by H&H Homes. The village residents accused the developers and builders of poor communication, ranging from not meeting or talking with residents for long periods of time to giving limited information at meetings to inconsistent reports and estimates.

The residents also noted that the developers are returning to the Planning and Zoning Board to assess a new plan and said they hope it turns out better.

Also speaking before the town council was one resident who urged the town not to move the 1874 Ivey Ellington House from its spot on West Chatham Street due to its historical significance and another who promoted skin cancer awareness and asked the council to incorporate more shade into the town and educate town employees about “sun safety” when working outside.

Before deliberations began at the meeting, Cary Mayor Harold Weinbrecht proclaimed Sunday, May 15 to Saturday, May 21, 2016 as Public Works Week in Cary.

Public works employees being recognized by Mayor Harold Weinbrecht before the town council.

Seven public works employees, including Director Scott Hecht, gathered at the town council meeting, many of who had 30 or more years of experience with the department.

Also at the meeting was a proclamation of May 2016 as Building Safety Month, with Weinbrecht thanking the town’s code officials and inspection department.

Story by Michael Papich. Photos courtesy of Google Maps and Town of Cary.