Cary, NC – Local lovers of horror movies will have the chance to give their feedback on a never-before-seen film shot entirely in North Carolina.

The Cary Theater will screen Fever Dreams Thursday, May 19, 2016. The film – by director Rob Underhill, executive producer and writer Al Julian III and producer and cinematographer Aravind Ragupathi – follows four different ambitious people as their livelihood comes back to haunt them in separate stories. Underhill said he has always liked horror movies that take this “vignette” approach.

“I’m a big fan of things like Tales from the Crypt and Creepshow and I also liked when they would work in a particular theme to link each story together,” Underhill said. 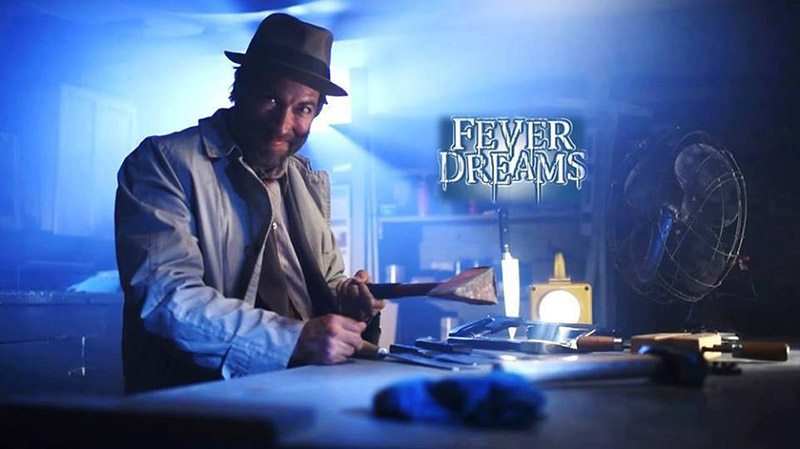 Local actor Jeff Briggs plays “The Bum,” the host and guide throughout the different stories in “Fever Dreams.”

Underhill added that having four different smaller stories make up the larger movie made the production easier, with the overall production taking between three and four years. But it also freed the film crew up to other possibilities with the show.

“It made it flexible if we want to take this and turn it into a TV show,” he said. “And this format let us have a host who guides us on a journey through the movie and, in a way, teaches us a lesson.”

The Thursday screening of Fever Dreams is what Underhill described as a pre-premiere or a test screening, allowing the filmmakers to gauge audience reactions and make final adjustments to the film. The screening will also be the first time everyone involved in the feature has gathered together to watch.

Underhill said he chose the Cary Theater as the location because of its high quality.

“It’s a beautiful theater. You have a great screen, great sound, comfortable seats and there’s a café lounge inside,” he said. “You can do everything you want to do with a premiere there.”

The Cary screening also highlights how Fever Dreams has been a Triangle production, using North Carolinian actors such as Mike Wiley and Jeff Briggs. Also starring in the film is R. Keith Harris, who has been in shows such as The Walking Dead and Under the Dome.

Cast and crew for the “Fever Dreams” vignette “It’s My House,” with actors Owen Daly and Catherine Sewell on the left, producers Al Julian, Aravind Ragupathi and Rob Underhill in the center and actors Michael Rosander, Meredith Sauce and R. Keith Harris on the far right.

Underhill has lived in North Carolina for nearly 20 years – working with Ragupathi to make the award-winning films Dar He: The Lynching of Emmett Till and Wolf Call – and said it’s a great shooting location.

“In the Triangle, there’s lots of arts from the theaters and universities and the international influences but no one is tired of it,” he said. “In Los Angeles, if you want to film in a café, they’ll charge you ten grand but here, people are open to helping out. Here, it’s all about the community.”

Fever Dreams shot parts at Triangle businesses such as Kim Crenshaw’s Photography in Apex, Southeastern Camera and Zinda in Raleigh and the Hillcrest Convalescent Center in Durham.

Story by Michael Papich. Photos courtesy of Rob Underhill and Hal Goodtree. Entertainment coverage on CaryCitizen is sponsored in part by Booth Amphitheatre in Cary.

Fest in the West: New Event in Western Cary This Saturday
Scroll to top