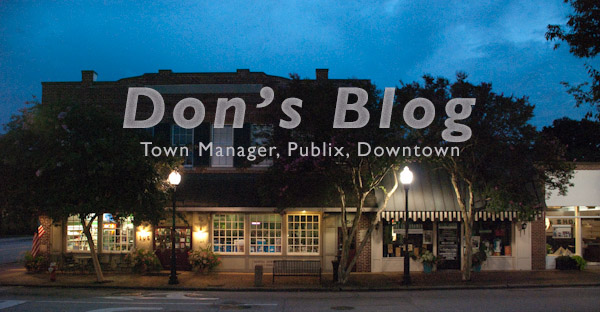 Cary, NC – Exciting things are happening in downtown Cary, and if all goes as planned, this project will be the first of many significant investments to come.

After a nearly nine month long process that included over 80 applicants from all over the country we finally have a new Town Manager. The council unanimously selected Mr. Sean Stegall who comes to us from Elgin Illinois where he has served as their city manager since 2009.

Mr. Stegall’s first official day on the job will be August 4th, but he will visit a few times prior to that to better familiarize himself with the town organization, staff as well as our community….and probably try and find a new place to live ; – ) His experience and success in local government, upbeat and energetic personality, and a fresh set of eyes will serve Cary well.

While this process took a lot longer than we had hoped, I believe it was worth the time and effort. Selecting a town manager is one of the most – if not the most – important decisions a council can make for their community. Get this one wrong and we will face the consequences for years to come. I am confident we made the right decision.

I want to thank Deputy and Interim Town Manager, Mike Bajorek and his staff for their hard work to keep Cary moving forward during this process. Mike is a good man and I have the utmost respect for him personally and professionally. He will play a key role in helping Mr. Stegall transition into his new position and I am confident both he and all of our town staff will do an excellent job just like they always do. Cary town staff are an amazing and dedicated group of public servants and it is an honor to work with them.

You can learn more about Mr. Sean Stegall here and here.

At our council meeting this past Thursday we approved the Lewter property rezoning (Publix) at the corner of Green Level Church Road and Carpenter Firestation Road by a vote of 6-1….oops, I mean 5-2. A second “no” vote came in a little late and caught most of us by surprise….especially since the majority of that person’s comments were positive. But I digress….

When this project first came to council I didn’t believe it would garner majority support without some significant changes. I applaud the applicant and area residents for working together to do just that. Sure, the residents didn’t get everything they wanted. Neither did the applicant. But at the end of the day they worked to craft a project that the majority of the surrounding community could support and is worlds better than the high density apartments that could have been built today.

The overwhelming majority of complaints the council receives from west Cary residents includes traffic, lack of shopping/services and school capacity. Eliminating residential development at this location helps in regards to school capacity and lack of shopping/services. And while traffic in the immediate area will increase, the number of vehicle miles traveled will decrease as area residents will not have to travel as far for goods and services as they do today.

I realize not everyone is pleased with our decision. Quite frankly I don’t think some ever would be no matter what the applicant offered. But when so many who were originally opposed to the project now support it, I am inclined to do the same.

Much of the public investment in downtown Cary over the last 8+ years has been done with the goal of incenting private investment. We are beginning to achieve that goal.

The Mid-town project along Chatham St. near Walker St. is currently under construction. Jordan Lake Brewing Company is also under construction. Bond Brothers Brewery recently finished construction and is open for business (I highly recommend their Cary Gold. Yumm…..). Crosstown Pub and Kababish Café are doing very well and a number of other businesses are either on the way or looking for sites – a few of which I really wish I could talk about but can’t….yet – sorry!

We are also experiencing record numbers in regards to home improvements/remodel permits and new home construction in and around the downtown area. Residents are now comfortable investing in their own properties since that the town has demonstrated our commitment downtown. The residential market in an around downtown is better than ever!

But “the big one”; that one development project that will really put downtown Cary on the map may soon become a reality.

Northwoods Associates has proposed a $50 million project at the corner of Chatham St and Harrison Ave that would include high density residential, office and restaurant/retail along with structured parking adjacent our downtown core. This would be a joint partnership with Northwoods Associates, The First Baptist Church and the town. The town would be a partner in the public parking component and assist with road construction and/or improvements to the tune of $5 million. 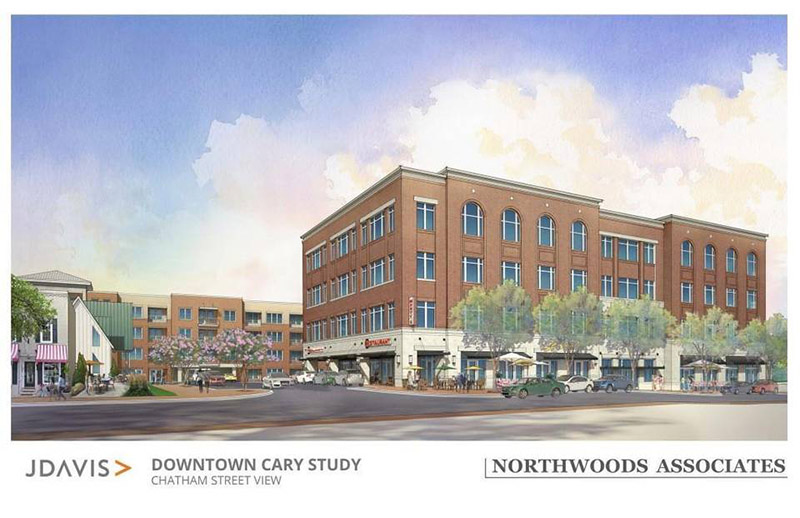 As with everything, I have heard from folks that are concerned with the proposal; some solely due to the impact on the historic Ivey Ellington House. The overwhelming majority of folks that I have spoken with however enthusiastically support it because at the end of the day they realize that we aren’t going to get the number and types of restaurants, businesses or employment centers we are looking for without an increase in density. They also understand that we aren’t going to see property values increase to a point that incents owner occupied housing vs rental in our surrounding neighborhoods unless downtown continues to redevelop and becomes a destination.

In regards to the Ivey Ellington House, I support relocating the home to another site where it can be restored and utilized either as a private business, home or possible town amenity. Academy Street, Park Street or maybe even the downtown park are some places that come to my mind.

A few others – to include a council member – have expressed some concern with the “look” of the proposal. I would caution against judging the appearance at this time as what has been illustrated thus far is purely conceptual in nature and will likely change as this moves through the process. I remember a number of folks who were also critical of the first sketch of The Mayton Inn and look at it now – gorgeous. Ya, the road is still a mess. As someone who drives through it multiple times a day I am as sick of it as most of you. Thank you again for your patience.

We have a number of beautiful and established single family neighborhoods in and around downtown. We have no intention of changing that; in fact it is just the opposite, we intend to protect those neighborhoods. But those neighborhoods alone are not enough to support increased business development and growth we hope to achieve downtown. So again, we need some density where appropriate.

Well that’s about all for now. As always thanks for reading!

From the blog of Don Frantz, Member of the Cary Town Council District B. Photos by Hal Goodtree and Northwoods Associates.