Cary, NC – Early art concepts for the future Downtown Cary parking deck were presented by artist Tom Drugan from the Seattle-based architectural design firm of Haddad|Drugan on Wednesday, May 25, 2016 at the Cary Arts Center.

The meeting was the second in a series that will help the design team finalize their concepts during the same timeline that Clearscapes of Raleigh is designing the parking deck architecture. Drugan will come back in July for another Council work session on the project.

Drugan first showed some recent large-scale projects that his firm has designed around the country before launching into ideas for the Cary project.

He mentioned the historical context of the area which includes a focus on education, which is a continuing legacy for the town, as well as technology. The proximity of the Arts Center and its former use as a school, along with the future location of the library, could influence their design ideas. He thought perhaps words or type could be integrated in their design concept. He also showed slides of cotton and tobacco fields, as crops that once grew in the area and could serve as possible design inspiration.

Materials discussed included brick with either staggered application or spaced openings to allow light to emanate from within or have uplighting on the outside to accent the texture. Other ideas included the use of backlit perforated metal to evoke the ideas of lanterns or the area’s common fireflies.

He highlighted the fact that views of the front of the deck will be obscured by future buildings along Dry and Walnut Street, and that the area that will have the largest view will be the back when seen from the park itself. This area has the most potential for a large-scale art piece. 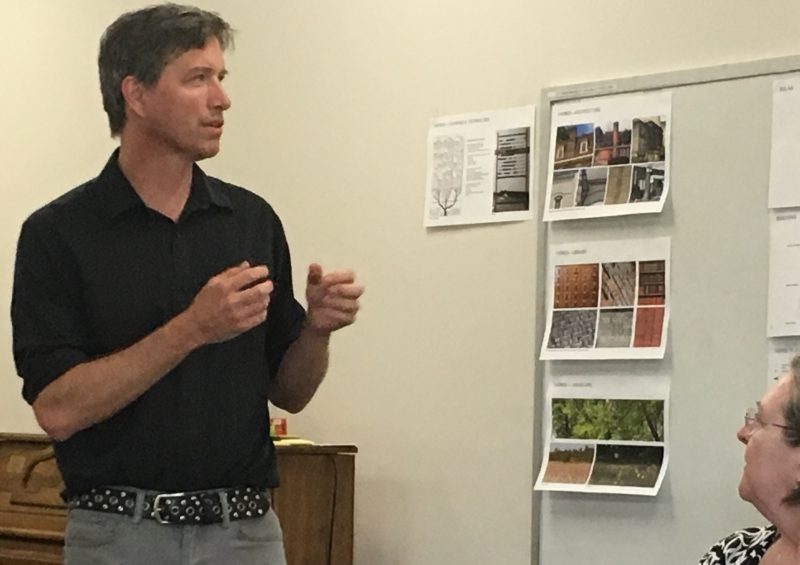 One questions fielded from the group in attendance included a warning about bird migration when using a lot of reflective metal. A second citizen put forth the idea to use solar panels on the roof to capture power that could be used for light inside the structure. Another question asked about the use of top for a “green roof” or if plantings could be incorporated there. It was noted the topmost level of the parking deck will not be covered, which could pose some great solar opportunities.

The team made a similar presentation in a closed session to town council the following night before heading back to Seattle. Denise Dickens, Cary’s public art director, said the Haddad|Drugan team will make another trip to Cary on Wednesday, July 20, 2016 to bring present council with three concepts to choose from to move forward with final design.

At some point, the design of the library itself will be brought forth by Clearscapes of Raleigh, which will help to formalize these plans. The timeline is for the library and the parking deck to come out of the ground at the same time on the corner of Dry and Walnut/Kildaire Farm Road, ideally to be completed in 2018.

The Town of Cary has more information for anyone interested.