Cary, NC – After a long battle between the Carolina RailHawks and the Jacksonville Armada, further drawn out by rain delays, both teams defended their goals and ended with a draw.

Close But Not Enough

The Saturday, June 4, 2016 game was a 0-0 draw between the two teams as RailHawks goalkeeper Akira Fitzgerald and Armada goalkeeper Miguel Gallardo kept the match even.

The RailHawks maintained possession for much of the first half, thanks particularly to Tiyi Shipalane, Matt Watson, Nazmi Albadawi and Austin Da Luz. But ultimately, they were unable to get through Armada’s defenses.

In the last half hour of the game, there were two close calls: one near-goal from Armada player Beto Navarro at the 60th minute and very narrowly missed goal from RailHawks’ Da Luz in the final seconds.

RailHawks Head Coach Colin Clarke praised the team for their defense despite being unable to score.

“I thought defensively, we were superb,” Clarke said. “I thought Watson and Albadawi in the middle of the park played well and forced the issue. I thought we played well, played great, created chances. Lots of chances.”

The RailHawks play again at home this Saturday, June 11, 2016 against Indy Eleven, the second-ranked team in the North American Soccer League (NASL).

Early this season, the RailHawks were the top-ranked team in the league coming off of several high-scoring wins but now are currently ranked fifth. The Jacksonville Armada is ranked last in the NASL. 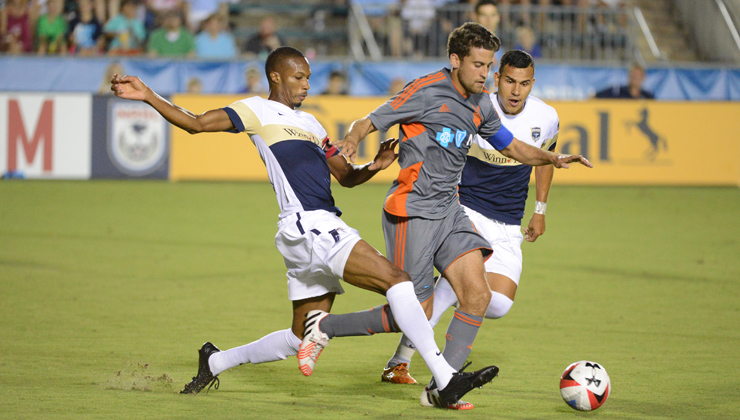 Story by staff reports. Photo courtesy of Rob Kinnan and the Carolina RailHawks.