Cary, NC – For weeks, CaryCitizen has been getting repeated requests to explain what happened to its beloved web editor Jessica Patrick. Now, our investigative team has managed to gather all the information to lay out the story for our readers.

After expending countless resources, CaryCitizen staff was able to obtain an exclusive interview with Jessica, who thanked the readers for asking where she went.

“I left CaryCitizen in March to accept a position writing for WRAL.com,” Jessica said. “In my new role there, I’m a web news editor, so I chose what articles and videos go on the website and where. I still get to contribute my own stories too, and those range from anything to breaking local news, weather reports, event guides and more.”

And Jessica said she got a lot out of her time at CaryCitizen.

“As some of you already know, Cary is my hometown, and it is incredibly special to me. The town became even more precious to me when I started writing for CaryCitizen in 2014 – when I learned more than I ever thought I could about Cary’s history, people, businesses, art scene, downtown and government,” she said. “I met so many wonderful people and made many new friends in my time at CaryCitizen that it’s hard to remember who I’ve told about my new job. Thank you to everyone who has asked about me. I will always be a CaryCitizen fan, and I might even contribute an article every now and then – so be on the lookout for my name!”

Anyone wondering if Jessica will still be in the Cary area will be pleased to know she is not leaving.

“Cary is great and I love it, so despite my new job, I plan to keep my roots planted here for a while. In fact, my roots still haven’t left. I volunteered at Spring Daze in April and spent seven hours outside Page-Walker last month painting as one of the artists in Cary’s En Plein Air: Paint the Town event,” she said. 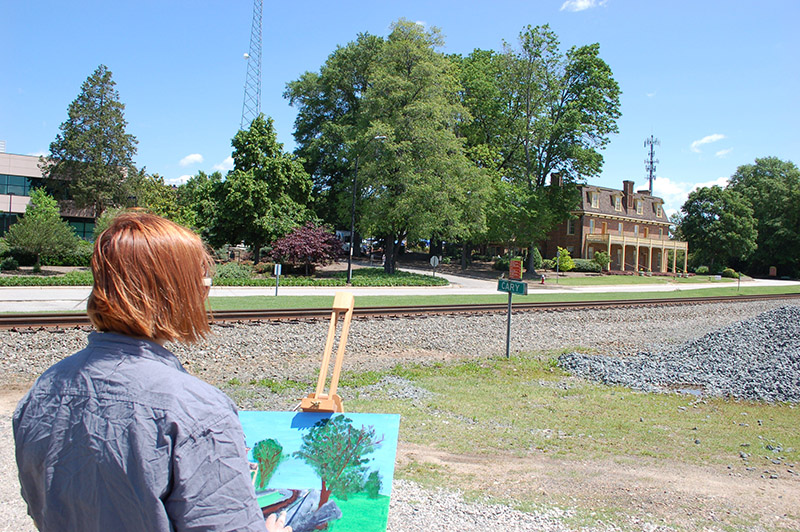 For anyone looking to meet Jessica again, CaryCitizen investigators were able to find her next public appearance.

“You can visit me on June 10 at the Cary Arts Center during the artists’ gala and reception,” Jessica said. “And if you ever see a story about a Cary event on WRAL, there’s a good chance that I wrote it!”

So Who Have We Been Reading?

Replacing Jessica in her position as web editor at CaryCitizen is Michael Papich. Michael is a graduate of Elon University and has worked at newspapers and news radio stations across North Carolina.

“Folks, you know what they say about graduates of Elon University who have worked at newspapers and news radio stations across North Carolina: good hair and a smile to share,” Michael said, unprompted.

Michael has been working at CaryCitizen since April, reporting on local goings-on and updating the CaryCitizen event calendar.

“The readers of CaryCitizen are like my children and I love them all equally and unconditionally,” he said.

The Cary Scavenger Hunt: Team Building At Its Best
Scroll to top