Cary, NC – This week’s activities were about the average pace one would expect during the summer.

Since this week included a regularly scheduled council meeting, I called council members to hear of any questions or concerns regarding the agenda. I was able to contact all but one and there were no questions since the agenda was limited. Later in the day I met with staff and the Mayor Pro-Tem to go over the agenda. Because of the very short agenda our meeting lasted about five minutes.

Tuesday started with a great announcement that Relias Learning was expanding in Cary with 450 more jobs and an additional $4.5 million in investments. This is the first big job announcement since HB2 went into effect and will be a big boost to Cary’s economy. I arrived about 20 minutes before the ceremony and was escorted into a conference room with the Governor and leaders from Relias. They spent their time discussing education in various areas and how Relias could help in many areas of state government. The official ceremony began with officials from Relias speaking, followed by the Governor, and eventually me. In my remarks I expressed our excitement in hearing of their expansion. I also noted Cary’s special connection to education – North Carolina’s first public high school was at the site of the current Cary Arts Center. The entire ceremony lasted about 30 minutes.

Tuesday night I attended a soccer match between the Carolina RailHawks and West Ham United of the Barclays Premier League, England’s top tier of soccer. These are the best players in the world. And while some teams from the Premier League play matches in the America, none have ever played in this region and especially in Cary. So this was a big deal for us. The match was a 2-2 draw with the RailHawks playing great and West Ham using a lot of substitutes. The stadium was packed with a record crowd and everyone seemed to have a great time even though there was a 30 minute delay for a thunderstorm. At halftime in the match the RailHawks announced that they signed Omar Bravo who is considered by some a Mexican superstar. Hopefully these two significant events will keep the RailHawks matches close to capacity the entire year.

Friday I attended the Cary Visual Arts 9th annual outdoor sculpture exhibition opening reception. I gave remarks as part of the 30 minute ceremony thanking the Cary Visual Arts for all they do for our community improving our quality of life and congratulating them on their first 20 years. The ceremony also included awarding artists from local schools and then hearing from the artists who created the eight outdoor sculptures that are currently on or near town hall campus.

Saturday I had the honor and pleasure to spend time with firefighters at our newest station 9. I was joined by council members Bush and George. We also had firefighters from other companies in Cary. The purpose of the event was to get to know our firefighters and experience a small fraction of what they train to do. Our first task was to slide down the fire pole which was actually a lot of fun. We all did it twice. Next we climbed the extension truck’s ladder all the way to the bucket while it was fully extended which is about eight stories. We then got in the bucket from the ground and were taken as high as the bucket would go to look at the surroundings. What a different perspective than what you see on the ground. After all the activities we were joined by the firefighters for a lunch of firehouse subs. How appropriate. We all had a great time and I can’t thank our firefighters enough for all they do. They are truly the best of the best. 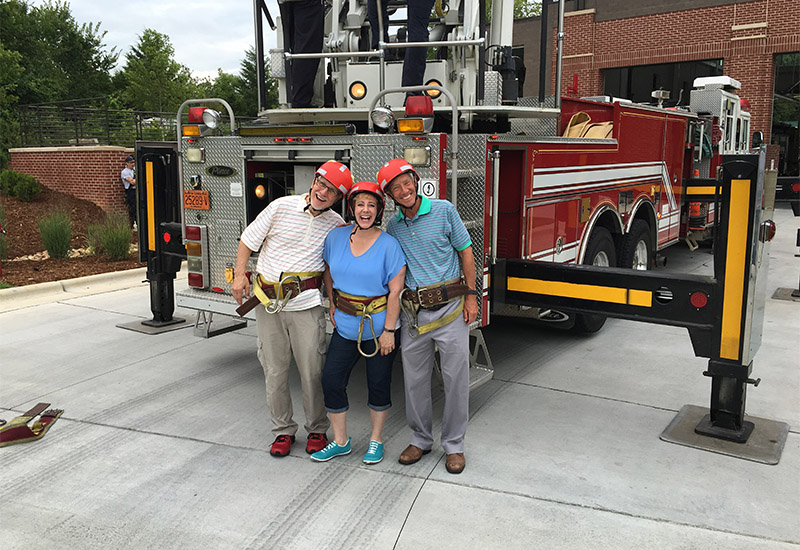 Next week’s activities include a meeting of the Mayors Association, a work session on the downtown library, the Eastern Cary gateway, and the council meeting schedule, a trip to Wrightsville Beach for the annual Cary Chamber Planning Conference, and other staff and citizen meetings.

Well, that is all for this week. My next post will be on Sunday, July 24th. Although I have Facebook and Twitter accounts those are not the best means of communications with me. Please send all Town of Cary questions or comments to Harold.Weinbrecht@townofcary.org and email personal comments to augustanat@mindspring.com.

Plans for the Hurricanes’ Future Season