Cary, NC – This was a busy week and will probably be the busiest week for the month of December.

Monday started with calls to council members to hear of any questions or concerns about the upcoming regularly scheduled council meeting agenda. I was able to contact 4 of the 6 council members and there were very few questions. Later in the day I met with staff to go over the agenda items. I predicted the meeting would last about three hours.

After the staff meeting I met with the town manager, assistant town manager, mayor pro-tem, and public information officer to briefly discuss an issue.

Monday vvening I met with staff members who are redesigning the town’s website. The new design should be public by the end of the year. There has been a great deal of research and analytics put into this design. New features will include Day and Night themes for the splash page, Tagging with calendars at first and then other pages, Newsroom/Specialized Templates, Archived content, and more layouts and additional widgets. In laymen terms it will be a much simpler, fresher design with a strong search capability.

Tuesday started with my one-on-one meeting with the town manager. He updated me on a few issues and then we spent time talking about heroin addiction in our community and our region. This is a much bigger problem than most people realize. I have asked for data and will share it once it is received.

Later Tuesday the council held a quasi-judicial hearing for a proposed 230,000 square foot middle school to be located southwest of Alston Ridge Elementary. The proposal triggered a quasi-judicial hearing because the it was greater than 100,000 square feet and it requested 5 out of 9 champion trees to be removed. A few adjacent residents spoke in opposition because they didn’t want bus traffic going through their neighborhoods stating that their kids played in the street. The applicant spent significant time talking about the reasons for the location of driveways, moving only bus traffic through the neighborhood, and the need for tree removal. After deliberation the council unanimously voted for approval. The meeting concluded after less than an hour.

Wednesday I had the pleasure of attending the Cary Employee Recognition Luncheon. I was honored to greet and shake 672 hands as they came into the dining area. The town manager gave a short speech and then the award ceremony began. Congratulations to Judy Newsome for receiving the Employee of the Year Award. Over the last three years, Judy has dedicated her time to developing programming opportunities for people of all ages with disabilities.

Wednesday afternoon I met with a group from a long time Cary business who are considering relocating in downtown Cary. I think that would be a wise move on anyone’s part as I anticipate downtown becoming more and more popular.

My last meeting Wednesday was with the Economic Development Committee. Here are some notable items from that meeting:

The committee spent a great deal of time talking about marketing Cary outside of North Carolina and making trips to employment areas to recruit jobs to Cary. Our meeting concluded after an hour.

Thursday the council held the only regularly scheduled council meeting of the month and the last one for the year. There were 15 consent items, 10 public hearings, and 6 discussion items. The Ryan Road Public Hearing, which is a rezoning proposal near Walnut Street behind the Burger King, had several people in attendance that were opposed. Their biggest concern is the 4 story height of the proposed building. The Mills rezoning proposal on Carpenter Upchurch Road next to Green Hope High School had been tabled twice and was approved by council 4 to 3 with me being the deciding vote. I felt that the biggest concern of traffic should not be considered since it is a state road, it is out of the control of the developer and the town, congestion will exist regardless of what is developed on the property, and the added traffic is not statistically significant. Therefore, my decision was based on conditions presented with the rezoning request and the density which matched the land use plan. The council also approved changes to the sign ordinance, the Holly Brook water and sewer extension project, and intersection improvements for:

These projects are estimated to cost over $4 million. The meeting concluded after 2 ½ hours.

Friday I had a brief interview with a reporter for Indy Week. They wanted to know my thoughts about the Railhawks announcement earlier in the week. I said that we have a great partnership with the owners, we take pride in their successes, and we want them to be successful. At this point we have limited information so it is hard to know what our role will be. I anticipate we will be having conversations with them in the future. 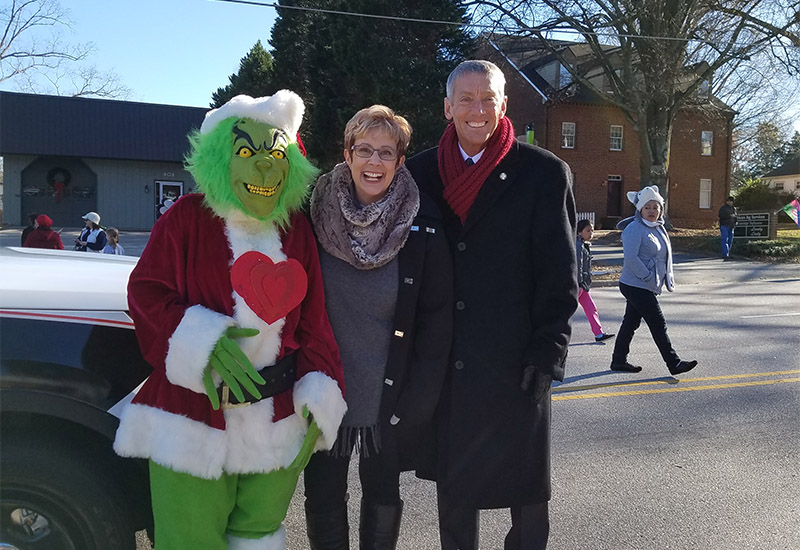 Saturday I had the honor of being in the 37th Cary Jaycees Christmas Parade. Before the parade began I posed for pictures with council member Bush and the Grinch who was actually Deputy Chief Dezomitz. I rode in a beautiful white Corvette convertible, provided by the Jaycees, which was in immaculate condition. Council colleagues Yerha, Bush, Robinson, Smith, and Frantz followed in cars and George marched in the alumni Cary Band. Though the temperature was a cool 42 degrees it was still a beautiful day. The parade had about everything you could imagine from bands, dancers, skippers, jumpers, floats, hotrods, busses, a fire truck, and even a garbage truck. As usual I threw out candy to the kids but my 4 bags only lasted until reached the Baptist Church on Academy Street. After I ran out of candy I took the opportunity to take a selfie before we finished the parade route. Since I was at the beginning of the parade lineup I was able to watch the rest of the parade with hundreds of other people. A big thanks to the Jaycees for once again putting on a great event. 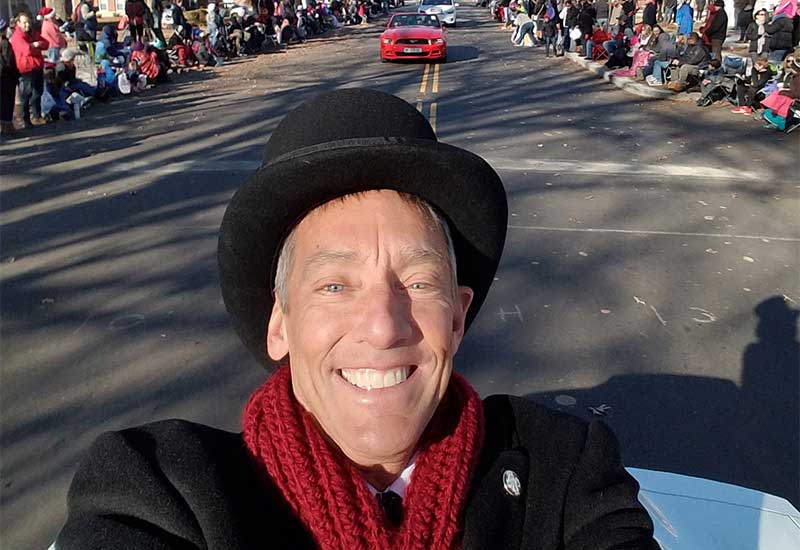 As you may have read in the Media Report, the administrative law judge who heard the Fayetteville challenge to Cary and Apex’s interbasin transfer permit modification has been granted a 45-day extension and now has until January 20 to issue his ruling.

This week Nicole Raimundo, Lee Worsley (from TJCOG) and Erika Sacco (Apex) met with the US Economic Development Administration NC liaison to discuss broadband and the plan to build out a regional municipal fiber network. This effort would leverage MCNC, starting locally and expanding into the more rural areas that do not have broadband access. In addition, Nicole met recently with other CIOs from around the state to discuss how to leverage the networks to better serve others.

A review of North Carolina Department of Environmental Quality records showed that Hurricane Matthew was a historically significant severe natural weather event that caused numerous sewer overflows in affected areas of North Carolina. Preliminary results demonstrate affected areas received approximately 206 sanitary sewer overflows (SSOs) during the event, which occurred on October 8. Cary’s wastewater collection treatment systems, which convey more than 6 billion gallons of wastewater per year, weathered the event that produced 7 to 9.8 inches of rainfall throughout the Cary service area with only one spill in the collection system.

The GoTriangle Board is scheduled to take up the sale of nearly nine acres of land to the Town of Cary at next Wednesday’s monthly meeting. GoTriangle tells us they intend to send out a press release next week.

Later this month the Town’s newest K9, Lemm, will be placed into service. Lemm was purchased with donated funds from a local Cary couple. He is named after a fallen service member who died the same year Lemm was born, a new trend by major police departments across the country.

Lemm replaces Robby, who has served the Town since 2011. You may remember him speaking at the October 13 Town Council meeting.

Approximately 800 Town employees gathered for the annual luncheon at Herb Young Community Center on Wednesday. At the luncheon, Judy Newsome was named the 2016 Employee of the Year. Judy has been with the Town for 14 years, most recently holding the title of Specialized Recreation & Inclusion Specialist. She has dedicated her time to developing programming opportunities for people of all ages with disabilities. In her nomination, staff dubbed Judy the “voice for those in Cary with disabilities”. The work Judy does is incredibly honorable, powerful, and affirming. I greatly admire her and appreciate all that she’s accomplishing for our citizens and our organization. Congratulations to Judy and all of the staff who help keep Cary great!

Also at our employee luncheon, some of you joined us in taking a moment to recognize a milestone first for the Town– 40 years of service! Hats off to Sammie Garris, Solid Waste Equipment Operator, pictured here with our Employee of the Year, Judy Newsome.

Emails from staff this week included an update on the remaining transportation projects funded by the 2012 Community Investment Bond:

Construction on these intersections should start in the Fall of 2017.

Other emails from staff included the following about the Railhawks:

“… Staff discussed this news on Monday with Curt Johnson, President of the RailHawks. He indicated that they have not picked a site yet for the new stadium. They completed a feasibility study several months ago in support of their effort to attract an MLS team. The study included 4-5 sites for a potential stadium, including WakeMed Soccer Park. He also indicated that the RailHawks were in the process of trying to securing a women’s professional soccer team.

As a reminder, the Town signed a 3 year lease for years 2016-2018 with the RailHawks in early November.  Council has a Staff Report on the agenda for December 8, 2016 to expand authority to include “Carolina FC and its Affiliates” instead of just Carolina FC.  This is a technical change to allow Carolina FC to operate a second team, a school, or similar under another name, which is common in the business environment.”

Other emails this week included a request from NCDOT to administer a survey to NCDOT customers to anyone interested in sharing their opinions about transportation services in North Carolina.  The survey is available at: https://ncsu.qualtrics.com/jfe/form/SV_bxQr0bD8PwImlKJ.

Next week will be a lot slower and will include the Wreaths Across America event at Hillcrest Cemetery.

Well, that is all for this week. My next post will be on Sunday, December 18th.  Although I have Facebook and Twitter accounts those are not the best means of communications with me. Please send all Town of Cary questions or comments to Harold.Weinbrecht@townofcary.org and email personal comments to augustanat@mindspring.com.