After the highly entertaining game Tuesday night, which brought back great memories of the Stanley Cup season, the Hurricanes started the game with the same high energy they had Tuesday. The line of Victor Rask, Jeff Skinner and Derek Ryan have been clicking very well together. All three are talented stick handlers and can thread the needle in high traffic to an open player.

That’s exactly what happened on the first goal with Rask along the back boards, passed up to Ryan just inside the left faceoff circle. Ryan was covered fairly well then did and reverse turn and in the same motion passed to Skinny in the dirty area of the crease. Philipp Grubauer made the initial save but Skinny with feet as quick as his stick, shuffled the rebound from skate to stick to slam it home with a purpose for the early 1-0 lead. The energy was high on both sides of the ice as these two teams were both on their A games: skating hard, fantastic stick checks all over, take aways then more take aways and good shot selection.

Faulk Ties It in the Second

With Justin Faulk in the box, future HOF Alex Ovechkin tied the game with his first goal in 10 games which is like a lifetime for him.  It also broke the scoreless streak for the Canes PK unit which is currently blowing away the rest of the league in that department. Just over midway in the period, on what appeared to be a mismatch of lines in the Caps favor, turned out to be good for the Caps.

Former Cane Justin Williams was camped out on Ward’s right post and was fed a pass from behind the net. Willie swiped at the puck hitting Matt Tennyson’s skate for a deflection into the net to put the Caps up 2-1. Just 2:30 later, the Canes youth took over on a fast play. Teuvo Teravainen passed up to Sebastian Aho in the neutral zone for a partial break away as there was just one defender back. Faulk joined the rush on the right side skating wide to split the defense. Aho fed a beauty to Faulk who buried it to tie the game.

The Canes had a powerplay early in the third and the NHL’s fifth-leading powerplay unit pulled through. The total age of the five skaters the Canes had on the ice barely broke 100 but they played like seasoned veterans as the puck control was quick and deliberate. So quick, it only took eight seconds for Aho to find Teravainen in front for a tip in to put the Canes up 3-2. The Canes needs every point they can garner, especially playing another Metro division rival, so the question was could the Canes hold the lead?

The Caps are a big, solid team and USA Olympic hero TJ Oshie knotted the game on a pure hockey goal as he tipped the puck in from 15 feet out that would have beat any goalie. With the Canes record of shootouts, their only hope was to win in OT.

As dominating play doesn’t count, which they did, they lost in the shootout going zero for two, whereas Washington went two for two.  A point is good but not good enough.

Cary, NC – Coach Bill Peters made his mind up if the Canes were going to be in yet another shootout, he was going to change the shooters for hopefully a different outcome. For the second year in a row, the Canes have the NHL’s worst shootout record, at 1-4 before the game. Peters’ change was for the better as Lee Stempniak and Sebastian Aho both converted as Cam Ward shutdown both Sabres to get the needed two points.

Last season, Buffalo skunked the Canes in all three games they faced, and while that was “last year,” players remember. Also because it’s Buffalo and who wants to lose to Buffalo?

On paper, these two teams are fairly well matched: both have 12 wins and 11 loses, with the Canes one more OT loss. Size-wise, Buffalo is one of the bigger teams in the East and they used that advantage in nearly doubling the hits on the Canes, some very hard, as well as the grabbing, interference and stick whacks along the legs behind the play.

Both teams were cautious in their play with little serious offensive attack. Ward started for the second night in a row and his competitive nature came out as he was sharp on every angle, especially anticipating where shots would come from. While Buffalo had eight shots compared to the Canes seven, the Canes did have the edge for the offensive plays. Late in the period with the fourth line on the ice, Brett Pesce made a lob pass into the Sabres end. Jay McClement had the quicker stick when the puck landed and got a swipe shot off to six-foot-six-inches Andres Nilsson who made the pad save. Joakim Nordstrom, who has been playing well lately, was in the right position at the right time and put the puck top shelf for a 1-0 lead. 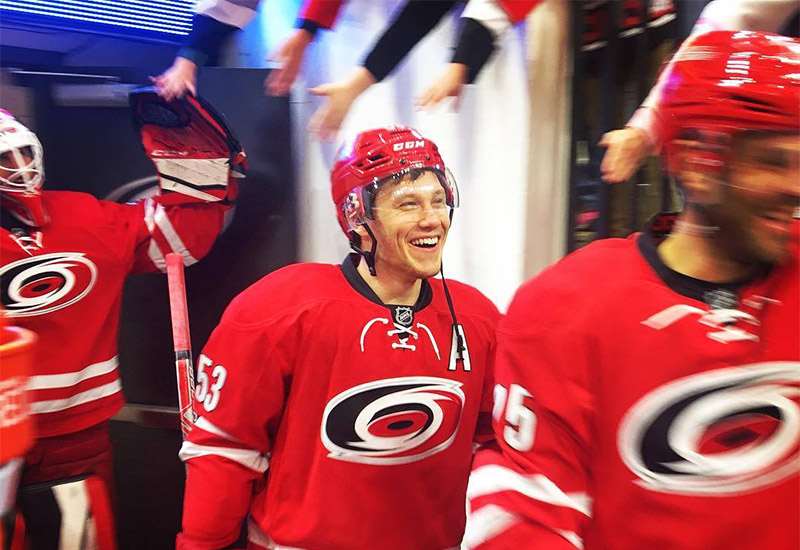 Defense Coach Steve Smith had to be pleased with the second period as the Canes held the Sabres to just four shots on net. The Canes didn’t have an offensive barrage themselves as they just got off six but all six were solid scoring chances. Jeff Skinner all but undressed two defenders, then Nilsson, only to get slammed in the back while getting off a shot. As Nilsson was down, Ron Hainsey’s eyes got as big as snowballs as he had an open net but one of those tugs from behind that weren’t called got him off balance as the shot went wide.

Buffalo’s star, Jack Eichel, is the real deal. He has the size, muscle, speed, stick skill and chip on his shoulders any team would want. While six-foot-two-inches, he plays with a strong center of gravity, meaning the guy just can’t get knocked off the puck. If you’re a Sabre fan, he’s fun to watch behind the play as he’ll trip, tug, cross check, elbow or any other little thing to get under an opponent’s skin. Brings back memories of Chad LaRose, who was a master of getting players off their game.

Stempinak, Aho Both Score in Shootout

The Canes didn’t actually go into a total defensive shell in the third with little offense as much as the Sabres wanted to keep their win streak alive. The Canes are known throughout the league as a possession team but anytime they had the puck in the Sabres end, it was brief and lucky if they got a shot off either on net, wide or blocked. The third was all Sabres but the Canes D was standing tall and doing a good job of clearing the crease in front of Ward.

Biggest question no one would talk about was would Wasrd get his third shutout in a month. That had the unfavorable answer with just 2:37 left when Evander Kane tipped in a shot along the ice that went wide of Ward’s big toe to knot the game at one a piece.

The OT was all Canes getting off six shots, twice as many as they had in the third but nothing could get past Nilsson. Then on to the shootout and Peters’ notion to mix things up paid off for a rare shootout win and the start on another home winning streak. Great game for the dozen or so CaryCitizen.com readers who took advantage of the Group Game Special.

Next game is Monday, December 19, 2016, tonight against Detroit. Be There! 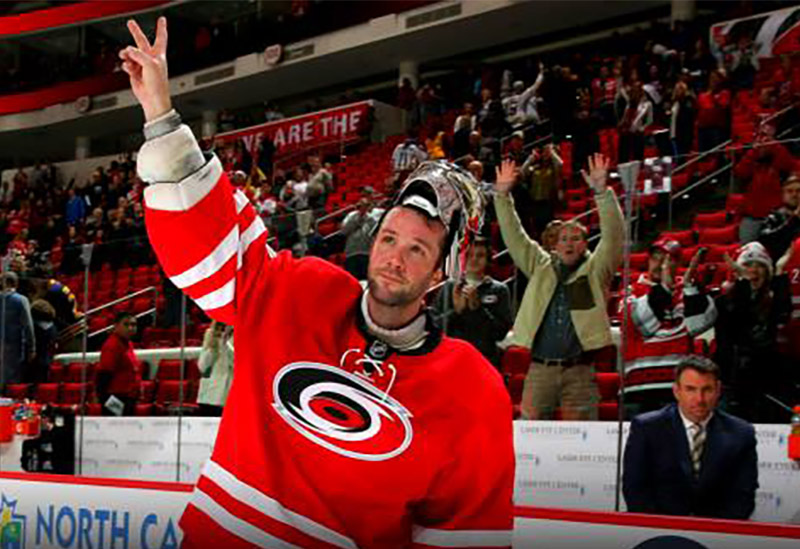