Cary, NC – This week was slower than last as things wind down for the year.

Monday I met with staff from the Transportation Department to go over transportation recommendations that are a part of Imagine Cary. After talking to all council members they will hold a work session on Tuesday, January 3rd to get direction from council about this section of Imagine Cary. My comments focused mostly on the Highway 54 section between Cary Parkway and Maynard and the extension of Cary Parkway from Harrison. We also talked about the pros and cons of 6 lane roads which are opposed by some council members. Our meeting lasted a little over an hour.

Tuesday I interviewed with 96.1 WBBB on the Doc and Laura morning show. They are interviewing mayors in the area to find out what is going on in their communities. I spent a little time giving fun facts and telling about things going on in Cary in the month of December. Some fun facts I shared that you may or may not know include:

I also talked about accolades we have received and the fun events coming up in December and January. Our interview lasted about ten minutes. I am not sure when it will air.

Wednesday I met with a representative from addiction family recovery support services. I was joined by the town manager as we brainstormed about ways to make people aware of a growing heroin addiction problem we have in Cary. I believe we need to become more proactive before the problem gets worse. Stay tuned for more on this later.

Later Wednesday I met with representatives for future investors from China. I taped a short video answering several questions about why Cary is a great place to live work and play. I even said “Cary Welcomes You” in Chinese. There have been several visits this past year from Chinese investors and we should expect more in the future. My taped segment will be a part of a promotional video. The taping lasted a little over half an hour. 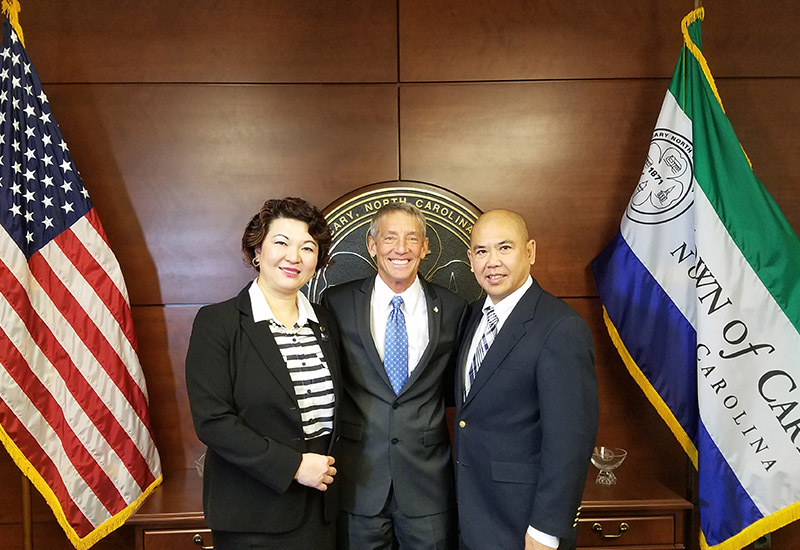 Saturday I participated in the Wreaths Across America event at Hillcrest Cemetery in Cary. Here is an excerpt from my remarks:

“…Like many of our citizens, I have not served in our armed forces, either at home or abroad, and yet, I, along with so many in our community benefit each day from the sacrifices made my men and women, some of whom may be your family members or neighbors or friends, have made for us. For that, please accept my heartfelt gratitude on behalf of all those who aren’t with us here today.

It was a proud moment for me to come across the national website for this wreath laying initiative and see our historic Hillcrest Cemetery listed right up there with Arlington National Cemetery. The Triangle is home to one of the largest groups of vets, right about at 8 percent of our area’s total population. Thank you for remembering them during this time of year, a time that evokes such strong emotions for so many of us. …”

There were several dozen people in attendance included veterans from all branches of service. After remarks from several of us we laid about 100 wreaths on graves of veterans whose final resting place is in Hillcrest. I was honored to be part of this ceremony.

Friday NC legislators held a special session which made several people angry including me.

[Begin editorial] – read at your own risk!

Friday the North Carolina Legislative majority, in their infinite wisdom, held a special session (like last year) to do something stupid which will once again result in taxpayer spending over a million dollars in Court. They decided to virtually strip the governor-elect of all authority they could imagine/manage. What was their excuse? The others did it before in the 1960s.

REALLY? What are they children? What a slap in the face to democracy which so many men and women have died to protect. I don’t know about you but I am sick and tired of the divisive partisan politics (both sides) that has gripped our state and our country. The people that took an oath to serve the people have somehow interpreted their oath as one that is supposed to serve their political party. We will NEVER reach our true potential as a state and nation as long as we continue to put political parties above all else.

If you want an example of how to do it right look at Cary which is governed by an apolitical body. Our partnership with our staff, the chamber, businesses, and especially our citizens has allowed us to become one of the most incredible places to live in America. We are the safest city in the nation. We have been awarded the best park system in the nation. Our award winning fire department has allowed businesses to get the lowest insurance rates possible. Our finance department has allowed us to have the highest rating of all the major bond rating agencies allowing us to have the lowest interest rate possible. Our water and sewer systems have been proactively built to serve us for decades and are so state-of-the art that others come to see what we have done. We are ranked as one of the best places to live in the nation. To summarize, we have the lowest tax rate in Wake County with the highest quality of life by far!

How did this happen? By working together NOT against each other. Sure we disagree but we do it because we truly believe our actions would be the best for the people we represent. Our political parties have absolutely nothing to do with our decisions. My hope is that one day the people that represent North Carolina and the nation, whether it is Republican or Democrat, will realize that their acting like children and serving political interests does not help North Carolina. Imagine the potential North Carolina could realize if both parties worked together to solve problems. During this season of reflection I would invite each and every legislator to read the oath they took out loud and remind themselves they are servants not the ones being served. ‘Nuf said!

Information from our planning department for November included the following:

To see more go to http://www.townofcary.org/Departments/townmanagersoffice/Weekly_Report_Files.htm.

Below is a slide that several of you, Council, requested as a result of the Imagine Cary small group educational meetings over the past week. The information in the slide is related to the changing traffic/travel patterns in and around Cary. It shows that Cary and Raleigh are strongly linked when it comes to commuter traffic and employment. It also highlights Cary as a regional designation. (The slide shows 67,372 people coming to work in Cary every day while 64,108 leave Cary for work every day.)

The Town of Cary and Renee Poole are featured in a recent article published in American City & County. The article talks about the importance of competitive employee benefit packages in a time of a changing workforce.

John Silverstein, who represents the Council and the Zoning Board of Adjustment in quasi-judicial hearings, has recently been sworn in as the President-elect of the North Carolina State Bar, the agency that regulates the over 27,000 licensed lawyers in this state. The State Bar investigates and prosecutes lawyers who violate the State Bar’s code of ethics; resolves fee disputes between lawyers and clients; prevents the practice of law by people who are not licensed; and, in general, seeks to advance the administration of justice. Mr. Silverstein is expected to be installed as the President of the State Bar next fall.

Most staffed facilities will close over Christmas and New Years, however curbside collection schedules will not be impacted. Citizens can dispose of trees and other natural decorations with their regular yard waste collection.

Cary One of Safest Cities in NC

The Consumer Research Company, ValuePenguin, recently published a study concluding Cary is among the top five safest large cities in the state. This ranking is based on a variety of crime metrics sourced from the FBI across 115 NC cities and towns.

Officer David Cohen was recognized at the North Carolina’s Hometown Heroes Ceremony, hosted by the NC Auto Dealers Association. This was regarding his valiant effort earlier this year in saving the life of a young child following a near drowning incident.

Next week’s activities include the annual Mayors Association Dinner, a retirement and installation ceremony for our K-9 dogs Robbie and Lemm, a Cary-Morrisville joint issues task force meeting, and other meetings.

Well, that is all for this week. My next post will be on Sunday, December 25th.  Although I have Facebook and Twitter accounts those are not the best means of communications with me. Please send all Town of Cary questions or comments to Harold.Weinbrecht@townofcary.org and email personal comments to augustanat@mindspring.com.