Cary, NC – In the Winter, it’s not dry out and the weather is cool. That makes it the ideal time for the Town of Cary to do some controlled burns to prevent future wildfires.

Cary’s prescribed burn, which takes place at Hemlock Bluffs Nature Preserve yearly, clears out debris that could potentially grow a wildfire. With the prescribed burn, Operations and Program Supervisor Mark Johns said there is no risk of a fire getting out of control.

“When you burn, we let it go at the rate we want,” Johns said. “It burns up the leaf-litter, which is fuel in a wildfire.”

The fire itself only lasts between 20 to 30 minutes across one to three acres in Hemlock Bluffs and the flames go about knee-high.

“Most people don’t even know it happened,” Johns said. “You and I can walk right in after it’s gone and lie down. It’s not that hot.”

By clearing out the leaf-litter, Johns said it prevents future scenarios when a fire might start.

“Every three to five years, when there’s been a drought and it’s windy, you get a fire out in the West from a misplaced cigarette or something,” he said. “Since World War II, when farmland started going away, there wasn’t as much burning being done by the people living there and the leaf-litter has been building up so we need to clear it.”

Clearing leaf-litter also makes it easier for the trees that are supposed to be growing, such as oaks and hickories, to have the necessary room.

Johns said the prescribed burn always happens in the Winter because that’s when it’s the safest but there are still tight conditions around when the burn happens. All kinds of factors go into determining the best time to go.

“We can get a good range if we know things like wind speed, wind direction and temperature,” he said.

Sometimes, the decision to do the prescribed burn is within an hour to make sure they act at the right time, Johns said.

“We’re shooting for windows every week and that will go until April,” he said.

With the targeted time, Johns said the concern is less to do with fires getting out of control.

“The concern for us is not these big fires. Those don’t happen here. But we do have concerns with smoke,” he said. “We’ve never had an issue or problem for the years we’ve been doing it and it wouldn’t be as much of an issue if there weren’t as many homes and roads around where we do it. You don’t want a big plume of black smoke on the roads when people are driving.”

The prescribed burn is expected sometime between January and April. You can sign up for updates by emailing  hemlocks@townofcary.org although spectators for the burn are not permitted. On the day of the burn, certain portions of trails will be closed. 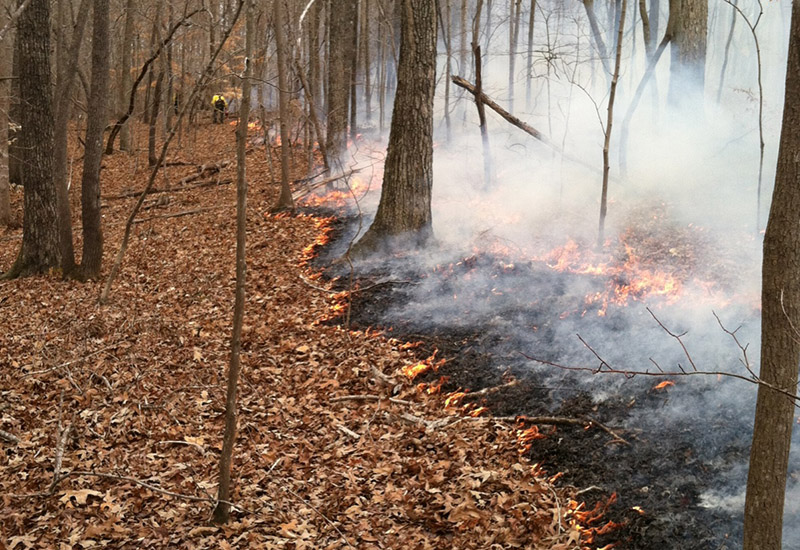