Cary, NC – Over the weekend, the Carolina Hurricanes played back-to-back home games and didn’t show any sign of exhaustion, winning both games handily.

As Jeff said, whatever Rod Brind’Amour told the team in between the first and second period, has to be the message he delivers before each game as the Carolina Hurricanes woke up from a deep sleep, knocking in three goals early in the second to pull ahead for good in a 5-2 come from behind win Friday at the PNC Arena over the Buffalo Sabres. The Sabres played the night before and by all accounts, should have been the team more tired but they had the jump early on over the Canes. 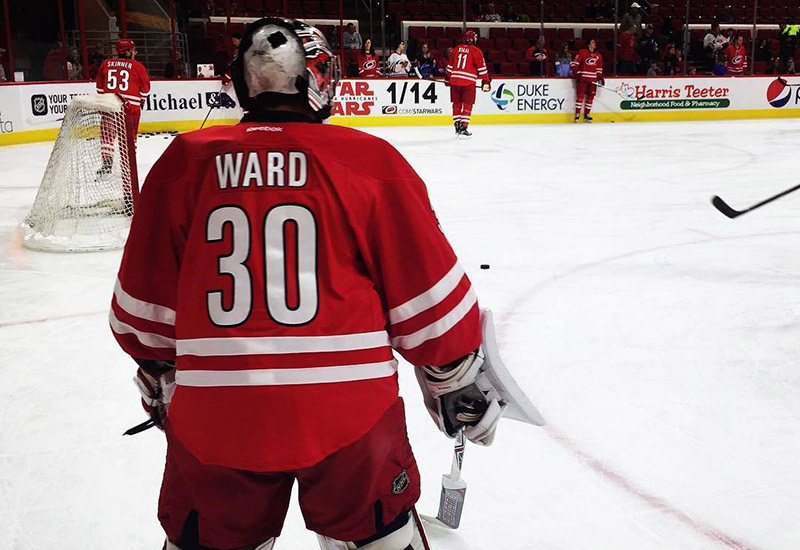 Ward Keeps Canes in the Game

The Canes were just plain lethargic in the first: slow, a stride behind the Sabres on nearly every play and even weak on passes which turned deadly. Cam Ward continues to be a very bright spot for the Canes this year as he was sharp from the get-go.

The Sabres are riding the back of Jack Eichel and for good reason, he’s am amazing player. Strong on the puck, skates with authority, works every inch of the ice, shoots hard, passes hard and hits hard. Eichel is putting up ice time of a defenseman and doesn’t slow down one shift. It’s easy to understand why he was the number two overall draft pick and why the Sabres fans have hope for the future. Next time he’s in town, take in a Sabres game and watch him behind the play.

Just under five minutes into the game, Jaccob Slavin made one of the few blatant errors he’s made all season when he had control of the puck in the corner and turned up ice to clear the zone. Seeing Ryan O’Reilly approaching he tried to backhand a pass to Brett Pesce on the right, instead he whiffed the pass putting the puck right on O’Reilly’s stick who passed to William Carter sitting on Ward’s doorstep for an easy tap in. The Canes were fortunate to have the period end at just 1-0 as their play was not what the Caniacs have witnessed over the past few months on home ice.

Skinny Nets Two in Under a Minute

We’ll guess it was Roddy’s in between speech or threat of keeping up with him in the gym if the Canes play didn’t change. Whatever it was, it worked. The Canes were the team with the extra jump in the second. The Canes were in the middle of a line change as Jordan Staal passed to Derek Ryan mid way in the neutral zone.

Ryan entered the Sabres end then dished a pass to Jeff Skinner on his left. Skinny took  a couple of strides then sent a hard slap shot that deflected off Anders Nilsson’s glove into the net to tie the game. Just under a minute later, Justin Faulk had the puck deep in his end when he made a 140 foot head man pass to Skinny at the Sabres blue line. Skinny turned on his jets then put a wrister stick side to put the Canes in the lead while getting the Caniacs into the game.

About four minutes later Elias Lindholm put on a muscle show along the half boards. First he out-manned his defenseman for the puck against the boards, then crouched low keeping the puck while turning then got off a hard shot that bounced off the pads. Brock McGinn snatched the rebound, calmly went in front of the goal and waited ever so patiently for an opening sending a pretty backhander into the far upper corner putting the Canes up 3-1.

Later in the period with the Canes on a powerplay, the Sabres cleared the puck the length of the ice. Ward came out to send the puck around the boards. Brian Gionta was coming at Ward full speed with Teuvo Teravainen coming in at three-fourths speed. Ward flubbed the clear, lost his stick and Gionta got the puck for an easy wrap around for a shortie. Two lessons learned: if you come out of the goal, be at least 100 percent sure you can make the play and go 100 percent speed at all times. 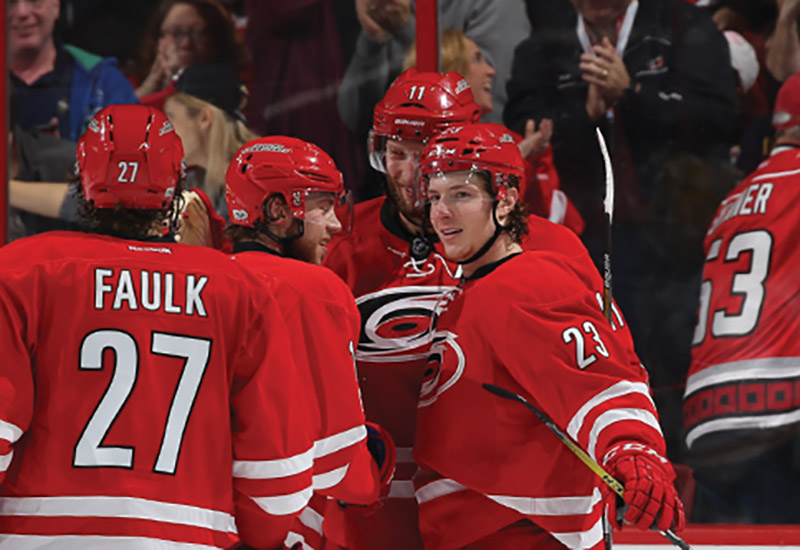 The Canes continued their dominance in the third and Ward continued to stop everything sent his way. Skinny had the puck on the left, passed up to an open Noah Hanifin in the high slot; Hanifin waited patiently and tried to thread the needle but the shot went wide. Victor Rask got the bouncing puck off the backboards on the rebound and one timed it in for his typical nonchalant goal.

Just over three minutes later, Jordan Staal carried the puck from his defensive zone along the left boards going behind the Sabres goal and dropping a pretty pass onto McGinn’s tape for his second of the night and the first two goal NHL game of his young career. The kid has worked hard and earned every minute of ice time so seeing him being rewarded like this is good.

Ward stopped four solid breakaways during the game which won’t make any NHL highlight reels. Those stops and his play this season have been a blessing as much as the key to where the Canes are in the standings. Don’t look now, but the Canes are within two games of a wild card slot.

Brock McGinn started the season in Charlotte but now that he’s up with the big team, he’s doing everything possible to make it impossible to send him back down. Friday night McGinn had his first multi-goal game when the Canes defeated the Sabres, Saturday McGinn had his first four point game as the Canes had another come from behind victory to keep the home streak at four with a 7-4 win over the NY Islanders in a very entertaining game. 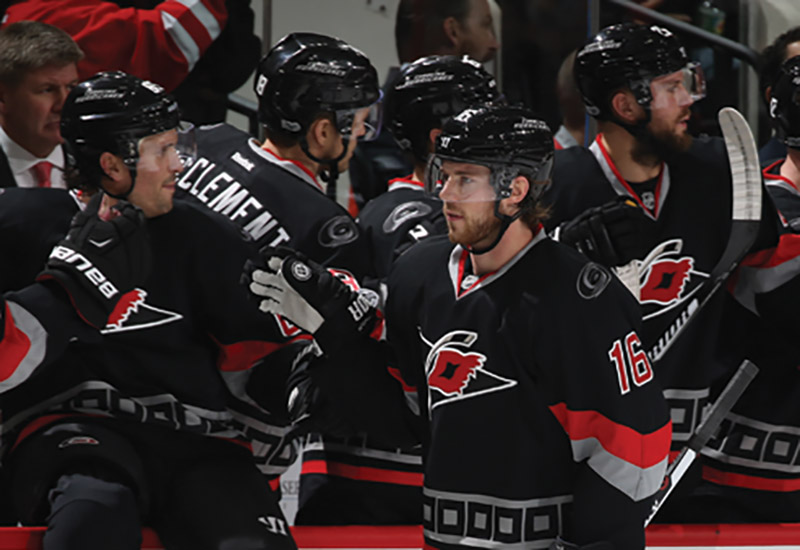 McGinn Was Just Getting Started

The Islanders have two former Canes: Dennis Seidenberg and Cam Ward’s good buddy, Andrew Ladd. Both Ward and Ladd warmed up before the game in their respective ends as required by the NHL, albeit it both were only about three inches on their side of the red line conversing with each other for what may have been a little howdy-do and maybe a dinner bet if Ladd scored or Ward stopped Ladd on everything tossed at him.

The Islanders unaware of the streak of the visitors scoring first continued that trend when John Tavares jetting down the right wing, then sending a centering pass from behind the net. With the scorer’s mentality he has, he instinctively went to the net after the pass. Scott Mayfield, in the high slot, sent a shot towards the goal that Tavares tipped with his blade past Ward blocker side.

Late in the period, the Brock McGinn show started. Jordan Staal passed to Elias Lindholm on the right with Lindy again using his grit to get a hard shot off that Thomas Greiss stopped with the pads. McGinn charged the net and quickly banged in his third goal in the past two games.

Less than two minutes later, the Isles were pressing in the Canes end. Anders Lee sent a hard slap shot that somehow found it’s way in the net. The NHL scorers hemmed and hawed over who got the goal as initially they gave it to Lee, then 20 minutes later gave it to Tavares, then midway in the third gave it back to Lee. When something like that happens, usually it’s the players saying who got the goal.

Canes Score Four in the Second

It’s not like the Canes had a bad first period that required another possible challenge to the gym by Rod Brind’Amour as both teams were fast in the first despite both playing the night before. But it certainly was a more determined Cane group starting out in the second as the Isles scored early in the second as Anthony Beauvillier had a clear run down the left side to Ward. Ward came up big with the save but Beauvillier got the rebound and sent it against the grain to an open Jason Chimera for an embarrassing tap in. Good chance Brind’Amour made the gym challenge on the bench as it was all Canes after that.

After a pass from Lindy behind the net, Justin Faulk had the puck on the low left point, saw some space, took a stride then sent a wrister into traffic that bounced off a few Islander bodies before trickling into the net. Four minutes later, right after Staal crossed the Isles blue line, he dropped the puck off to McGinn. McGinn had his head on a swivel then made one of the prettiest backhander saucer passes you’ll ever see to Lindy 30 feet to his left.

Lindy wasted no time in smashing the puck in to tie the game. McGinn wasn’t finished as very late in the period, he made another perfect lead pass to Brett Pesce who joined the rush, extended his long stick for a very good looking goal to send the Canes up 4-3. 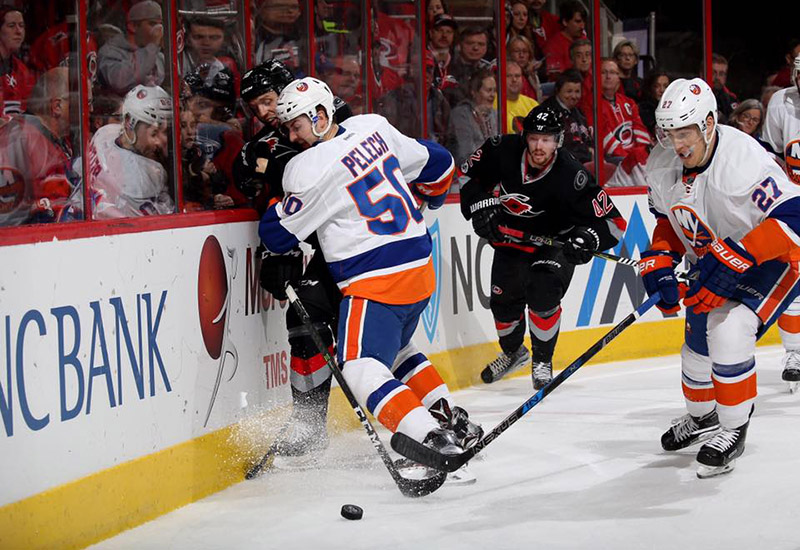 For the third period this game, the Isles scored first in the period. After the Canes had trouble clearing the puck, Tavares had the puck in an open area of the slot, which is usually an automatic goal and in this case it was to tie the game at four apiece. Just under the six minute mark, Teuvo Teravainen won a face off back to Lee Stempniak. Stempniak gathered the puck, took one stride while pulling his arms back for a wicked wrister into the far upper corner to put the Canes up for good.

Not sure how the official scorers didn’t give the assist to Teuvo as it was clear as day an assist. Just six minutes later, Teravainen made sure his number was on the scoresheet as he knotted his tenth of the season tipping in a Justin Faulk slap shot. Staal ended the scoring on quick shot off a rebound from Matt Tennyson after the play was set up by McGinn, or as some were calling him Brock Again.

Who could have guessed the Canes would score seven goals with the Rask-Skinner-Ryan line not being involved in one? Great game and a great crowd on what was Star Wars night when the Force was with the Canes.

Next Game is Friday, January 20, 2017 against Pittsburg with another Home Grown Series. Big Crowd is expected. Be There!