Cary, NC – The latest Cary Town Council meeting saw the culmination of seven years of work as council voted to approve the Cary Community Plan, as well as other votes on Lazy Daze, vehicle fees and more.

This was by far the biggest item on the meeting’s agenda, with town staff and advisors giving a lengthy presentation on what the plan covers. Essentially, it is a guideline for how Cary should develop from now until 2040. This was also the last major presentation by Planning Department Director Jeff Ulma.

Before Town Council discussed the Cary Community Plan, they heard from four residents during Public Speaks Out. These residents were discussing property – both near the Cary Parkway/US-1 intersection and west of Green Level Church Road – they were concerned would be rezoned under the Cary Community Plan. They wanted their land to be listed as residential but now would be developable for commercial or office land.

Both Cary Mayor Harold Weinbrecht and Ulma reiterated that the Cary Community Plan serves as a guideline and their zoning is not finalized, with that decision still made by Town Council. In fact, Ulma said the plan makes the process to apply for rezoning more flexible. 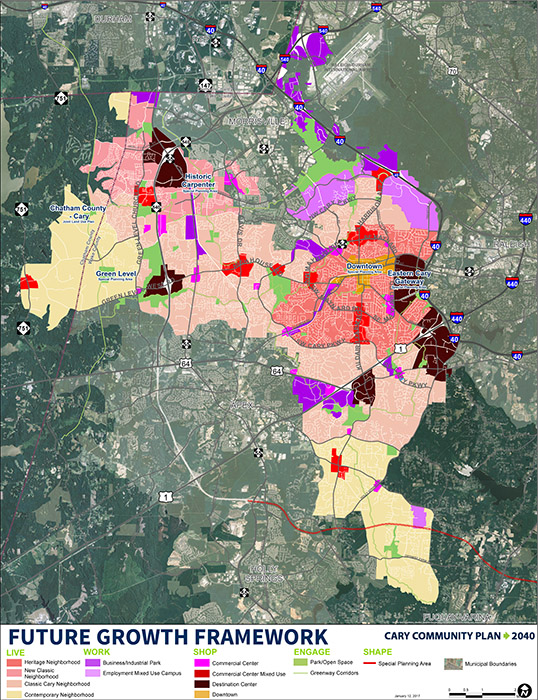 But several councilmembers said the Cary Community Plan’s recommendations are made for a reason and it would not be as simple for those property owners at the meeting to rezone as was being implied.

“That may be a high hurdle to overcome,” said Councilmember Jack Smith.

Weinbrecht added that when past community plans have been passed, exceptions were made that deviated from their ideas of balance and growth.

When it comes to rezoning requests that come before Town Council, Mayor Pro Tem Ed Yerha said his process would not change because of the Cary Community Plan.

Yerha also said he had concerns about the transportation proposals and some of the road extensions and widening. He also said he felt the planning for Downtown Cary went too far and was too dense.

Town Council voted unanimously in favor of the Cary Community Plan, as well as two amendments to make language in the plan consistent.

With only discussions items on the agenda, the Cary Town Council also voted on a number of other issues. One of the other large items was permanently extending Lazy Daze to two days. Last year, on the event’s 40th year, the annual arts festival was extended and Lyman Collins, Cary’s cultural arts manager, said having it on two days was preferred by both visitors and town staff.

Collins also said the extension would keep Lazy Daze on Town Hall Campus. In the previous years, it was located there because of construction on Academy Street but the location was preferred for a number of reasons ranging from safety to walkability. But most importantly, keeping Lazy Daze open for two days would cause too much of a blockage on Academy Street.

There were some complaints about the location, namely from some downtown businesses who said they did better when the event was on Academy Street and the railroad was worried about people crossing the tracks. Collins said the department will be working with these groups to help alleviate concerns.

The plan is also for Town Hall Campus to be a temporary spot, with the event one day moving to the new downtown park being built.

All councilmembers voted to approve it, although Councilmember Don Frantz said he thought it unlikely that Lazy Daze would move to the park and would instead stay at Town Hall Campus.

On Election Day, Wake County voters approved the bond items for the new Public Transportation plan. Included in that bond was a half-cent increase in sales tax and a $7 vehicle registration tax to fund the project. Town staff reiterated what the new transit plan will do and reminded Cary that while the Transit Planning Advisory Committee will give the town suggestions, the Town Council will have the final say on how Cary services will be used for transportation.

The vote before Town Council was to approve the $7 tax, which town staff said the other participating municipalities voted for. Frantz was the main dissenting voice and said he did not like this form of taxation since vehicle owners will not be using public transportation as much.

“Vehicle owners will be double and triple taxed,” Frantz said, adding he would rather there was just a one cent sales tax increase instead. Frantz also said the vehicle registration tax was not heavily advertised in the campaign for the bond.

Other councilmembers agreed with Frantz’s frustrations but said if they did not approve the tax, it would put them in a difficult position when it comes to making transit decisions in the county and they wanted to be in line with other municipalities. The final vote was six to one, with Frantz voting against.

Also on the agenda was approving an update to the Title VI plan for GoCary to make sure it is in line with the Civil Rights Act and has the right anti-discrimination policy.