Cary, NC – Sebastian Aho is just 19 years old but plays with the confidence and savvy of a seasoned veteran who has played hockey for 19 years, scored his first career Hat Trick against the Flyers in a solid game for the entire team after the All Star break.  The Canes were riding a five game losing streak while the Flyers were on a three game winning streak, barely holding on to the last playoff spot so this game was important for both teams.

Aho Nets Two In The First

With both teams knowing the stakes, the game started out very fast with solid forechecking and speed the obvious word from both coaches. Philly has always been a physical team, taking every opportunity to bang a body against the boards. Brock McGinn and Viktor Stalberg made sure the Canes were also active along the boards as they both are fast skaters and one may say they seem to enjoy putting a hard shoulder into an opponent to get them off their game.

Noah Hanifin, who just turned 20 last week, had a solid game all over but one play early in the first was key that could have had a big difference in the way the game went. The puck was just over the blue line with Hanifin and three Flyers going after the puck. Hanfin got the possession but rather than pass to an open area up ice, made a turn that would have impressed Peggy Fleming, bringing the puck into his own end for settling the play. Just as he was settled he spotted Derek Ryan at the Flyers blue line and made the head man pass right on the tape.

Ryan had the breakaway but the defenseman on his right came down fast so his shot didn’t have everything on it. Had Hanifin not won that puck, the Flyers would have had a three-on-one. Then the Aho exhibition started. Jordan Staal did his yeoman hard work along the back boards winning the puck. He brought the puck up the far side, fed the puck to Aho as he slipped by a defender, faked right, went left then slid the puck in for his first of the night. Time of the score: 7:11, so the odds were in his favor for a fun night ahead.

Late in the period, Aho barely kept the puck in the O-zone as he snagged a clear by the Flyers defense. Aho passed over to Elias Lindholm along the half boards on the left wing. As Aho passed, he went to the open area inside the far faceoff circle, Lindy spotted Aho then threaded a hard pass past two defenders that Aho did a one timer that hit Steve Mason’s pads but trickled in for a two goal lead. 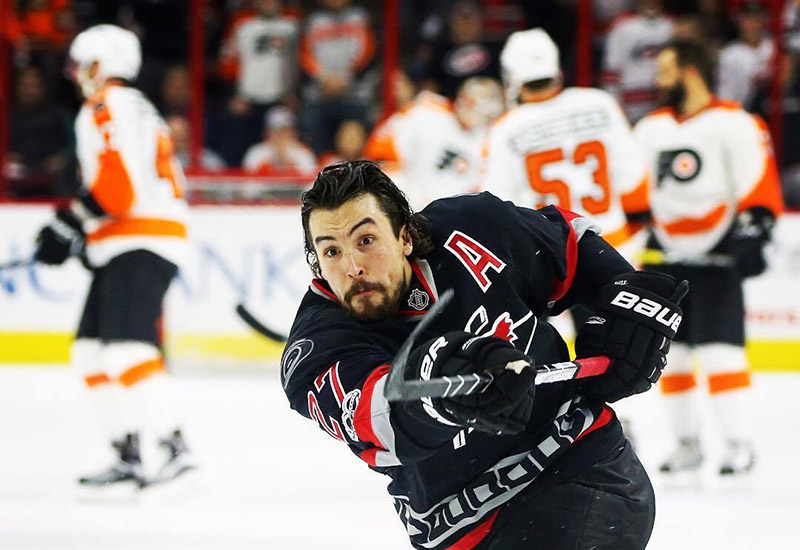 Victor Rask almost made it 3-0 early in the second as Lindy made another solid pass to Rask on the doorstep on the far side of the goal. The pass went faster than Mason could recover so Rask had an open net however defenseman Brandon Manning went down like Ken Dryden double stacking the pads blocking the would be goal.

The Canes had their powerplay chances and at one point, Jeff Skinner at the ripe old age of 24 was the old man on the ice. Hanifin doesn’t have the hardest shot yet but his confidence and calmness on the powerplay has evolved since the beginning of the season and credit coaches Steve Smith and Rod Brind’Amour for that improvement. Late in the period, Jeff Skinner took the puck from the neutral zone into the Flyers end and went right for the net.

The puck was deflected to the back but Lee Stempniak got the puck then passed to Skinny about 14 feet to Mason’s right. Skinny must have played a lot of pool over the break as he banked a hard slap shot off Mason’s arm into the side pocket of the net for a nice 3-0 lead. Just about 90 seconds later with the Canes on another powerplay, Aho completed his hat trick off another nice pass from Lindy. 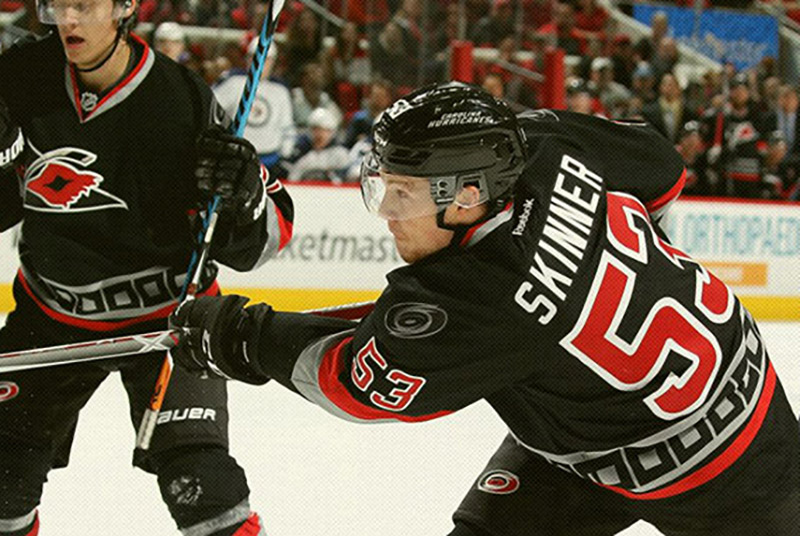 The Flyers were trying to bring the game down to their usual back alley ways as the hits got cheaper and the trash talking was more prevalent. As many teams do, their number one target was Skinner. Nick Cousins slashed Skinny then tried to engage him in a fight. A couple of games ago Skinny lost his cool and was benched for the entire third period and Coach Bill Peters had a heart-to-heart talk with him at the next practice. Whatever was said worked as Skinny skated away with Jaccob Slavin standing in between the 2 players just to make sure calmness prevailed.

While the Canes kept possession, Stempniak was also tripped along the blue line giving the Canes a five-on-three powerplay. Justin Faulk converted on the front end giving the fans their own hat trick: a free BoBerry biscuit, free Queso and discounted pizza. On a period when refs somehow find it hard to blow a whistle for an infraction, seven penalties were called. Frankly, it could have been a few more but that’s hockey.

The Flyers converted on their last powerplay ruining Ward’s shutout but he’ll gladly sacrifice that over getting the two points. Great game, good crowd that certainly took advantage of the $27 seats in the lower bowl in honor of #27 Justin Faulk for being in the All Start game.  Lesson learned: next year when All Star voting opens up, vote for Noah Hanifin, he’s #5!

Next Game: Friday, February 3, 2017 against Edmonton and Connor McDavid. Be There!

Coming Films to the Cary Theater – February
Scroll to top