Cary, NC – While the Carolina Hurricanes got one victory over the weekend, their chances of going to the playoffs melted with one loss too many on Sunday.

It’s not that Coach Bill Peters has given up on the season, quite the opposite as he’s as hungry for points now as he was back in October, but putting Eddie Lack in goal was a surprise. Lack has had an extremely disappointing season as he’s battled in goal and missed 28 games due to a concussion. His attitude and humor in the locker room are what the Canes need as they need something to help get break their five game winless streak.

The Canes started the game very strong as aside from a weak shot by Ottawa, all the play was in the Senators end. With just over a minute into the game, speedsters Brock McGinn and Phil Di Giuseppe were passing back and forth with Di Giuseppe kepping the cycle going putting the puck in the corner.

Jordan Staal out-muscled Staal family enemy #1, Dion Phaneuf, snatching the puck and made a power move behind the goal. Using every inch of his six-foot-four-inch frame and what looked like five-foot arms, did a wraparound that banked off the far post into the goal for the early Canes lead. Staal had a few words for Phaneuf right after the goal then stared him down with a snarl rather than the usual goal celebration.

The Canes kept the pressure on and with barely three and a half minutes gone, the Canes had eight solid shots on net while the Sens still had that weak initial shot. The day before, the Canes traded veteran D-man Ron Hainsey to the Penguins for a second round pick and a minor leaguer.

That move allowed Ryan Murphy to start a game in what have seemed like forever for him and overall he had a good game. He played Juniors with Jeff Skinner and like Skinny, has excellent hand-to-eye coordination as he batted pucks out of the air twice in the initial period that thwarted entry of the Sens into the Canes’ end. He is also an excellent stick handler and while he has decent speed, he looked off a stride last night and his size is really a question to be an every day NHL defenseman. He has another year on his contract and I’m not sure if he’s in the Canes future. So maybe if he does well over the next few weeks, he could be part of a trade that could benefit his career. 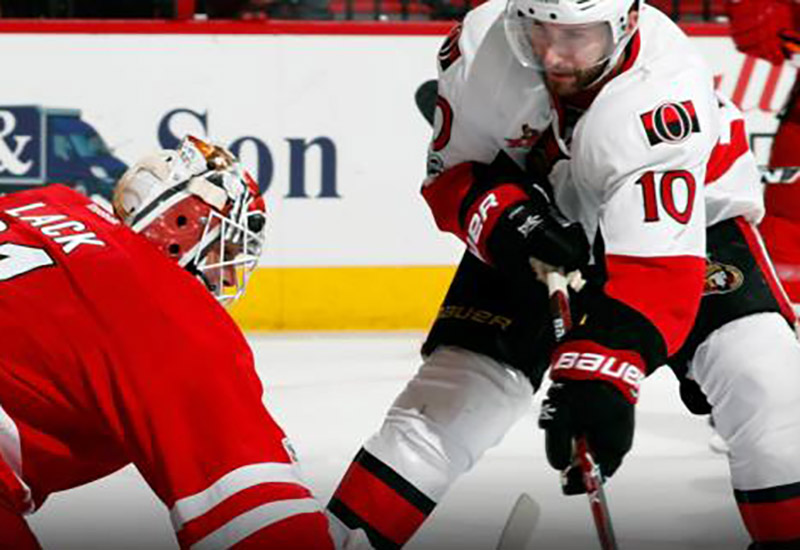 The Canes continued their upbeat play in the second mostly carrying the puck in the offensive zone rather than dump and chase hoping for the best. In the first period, there were several non-calls by the refs including one that was so obvious it set Coach Peters off on a rant in which I’m sure he pointed out which paragraph in the rule book the refs need to re-read.

It happened on a close offside call against the Canes. Victor Rask was the guilty party and was calmly skating towards the corner when Mark Borowiecki pushed him in the boards causing Rask to take an ugly spill. The normal pushing and shoving match ensued and still no call. The game started at 7:30 so maybe the officials had a dinner reservation at Rey’s they didn’t want to miss.

Sebastian Aho had the puck at mid ice along the boards when Zach Smith’s stick hit Aho’s skates sending him to the ice. Aho got back up like he was on springs and made a pass over to Rask. When the whistle was called, Smith started yelling at the ref so much the linesman had to get in the middle and escort him to the box. Not sure what Smith was yelling but surely he wasn’t saying if they didn’t make the call against Borowiecki in the first, how could they make the call against him. Sometimes it’s best to keep quiet.  The Canes powerplay looked very good, the passing was fast and accurate. Skinny got off a couple of laser shots but all were at the logo on Craig Anderson’s sweater.

Late in the period, the Canes scored two back door goals. The first was by Elias Lindholm, who despite this being just his sixth goal has been playing extremely well. He’s the full package – fast, strong, likes the physical play, excellent passer, good memory, has great ice sense and plays with a chip on his shoulder.

His goal was set up with Staal grabbing the puck behind the net pulling it wide on the left side of the goal. He centered the puck but it hit a defenseman, Di Giuseppe pounced on the loose puck then sent a sweet backhander across the crease to Lindy all along on the right side of the goal for a quick one timer. First thing he did after the big smile was yell ‘nice pass’ to his linemate.

The second goal of the period was similar to the first. Rask won a face off but the puck went back and the Sens were trying to clear. Good forechecking by Viktor Stalberg kept the puck in the O-zone. Rask got the puck passing over to Aho. Aho tried a weak back hand shot that bounced off a defender which then saw Stalberg use his speed to the puck snapping it past Anderson for a solid 3-0 lead.

The refs found their whistles in the third as the Canes were called for two and the Sens getting just one. All were penalties but certainly gave the impression that if Peters was citing the rule book in the first, the refs did a refresher in between periods.

The Canes continued their NHL leading PK kill by killing off both penalties. Lack was under some pressure during two solid scoring chances. One had him stop four shots in the span of two seconds with the last one square off his face mask and knowing Lack, his response was “saw it all the way.” Great finish for the team, Lack earned his first shut out as a Cane with 34 saves and put some life back into this team.

With the departure of Hainsey, the Canes now have the youngest blue line in the NHL by a long shot. They’re also one of the smallest but their speed helps that offset. I doubt GM Ron Francis is done making deals as there are a couple of players that have market value and with the draft relatively weak this year, Francis may need picks along with prospects to make a deal for an established scorer that the Canes have desperately needed for the last four years.

The Carolina Hurricanes scored on their first power play which woke up the Calgary Flames and the Flames ignited for three unanswered goals dousing the Canes in a 3-1 loss. The Canes closed out the five game home stand 1-3-1 for just three points when if they got seven or eight points, they’d be at least in sight of the final wild card position.

While not mathematically out yet, with some expected moves in the next 48 hours by GM Ron Francis, the front office is planning for the 2017-18 season. Right now, the Canes have 10 picks in the June draft and will more than likely pick up another one or two this week. It’s not likely the Canes will make all 10, 11 or 12 picks but will in all likelihood use some picks and some prospects for a trade and the Caniacs have to be hoping for a solid, established goal scorer.

Rather than the Flames, it was the Canes that started out on fire. Big man Jordan Staal drew a penalty as he was held by Sam Bennett. Victor Rask won the face off, drawing the puck back. Jeff Skinner touched it up to Noah Hanifin who fake right then sent a return pass to Skinny along the half board. Skinny faked a slap shot then fed a cross ice pass through traffic to Rask camped out in the far faceoff circle. Rask took his time then chose to send a wrister in short side for the early, and lone, Canes lead. It’s been forever and a day since Rask last scored a goal so hopefully this is the beginning of his old scoring ways.

Midway in the period, the Canes had the puck in the far corner. Ryan Murphy was skating his way into the zone having just come off the bench for a line change. Elias Lindholm fed a pass with the right speed to allow Murph to cross the blue line for a slap shot. Murph clearly beat goalie Brian Elliot but Phil Di Giuseppe and Matt Stajan got tangled with Di Giuseppe going down, Stajan going into the net buckled over. Murphy’s Law happened and the puck hit Stajan on his shoulder while bent over – lucky it wasn’t his head – making a save for what would have been, should have been Murph’s first goal of the season. 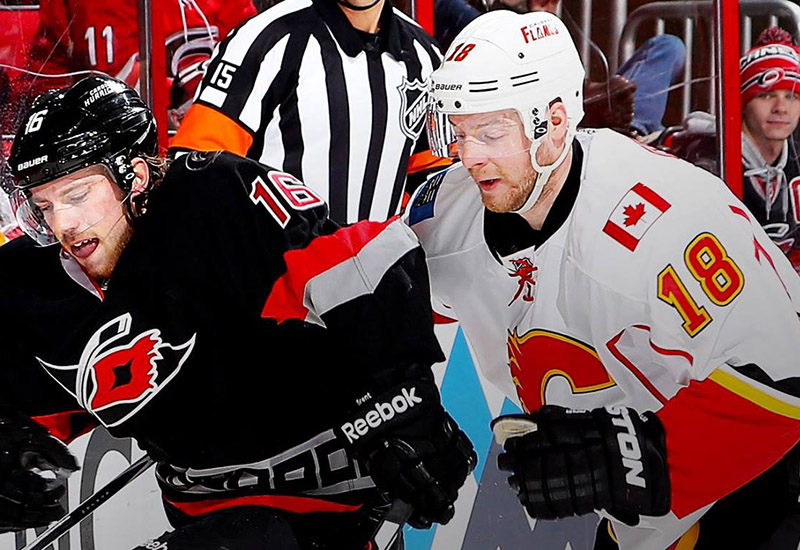 The Flames turned up the heat in the second with a majority of the play in the Canes end keeping the Canes on their heels. Just over the six-minute mark with the puck in the Flames end, Johnny Gaudreau grabbed the puck just inside the blue line and saw Michael Ferland in the neutral zone. Gaudreau made an amazing back hand pass allowing Ferland a break away in on Eddie Lack that he buried to tie the game.

Nine minutes later, Gaudreau put on a one-man show as he took the puck from his defensive zone, past two Canes in the neutral zone down to the Canes end. He reversed direction then circled down the slot for a shot that Lack blocked but Johnny Hockey was there for the juicy rebound putting the Flames up 2-1. Gaudreau is one of the smaller playest, and now that Nathan Gerber isn’t in the NHL this season, I think he’s the smallest in the NHL at five-foot-seven-inches and just 157 pounds, which both may be a gift, but the guy is very talented.

Gaudreau lit the lamp again mid way in the third but this time had helpers from Sean Monahan and T J Brodie. The Canes just couldn’t get any mojo going despite coach Bill Peters juggling the lines and benching a select few for a few shifts. The Canes have a mandatory day off then one practice this week before a trip to Tampa Bay on Wednesday.

As stated above, I suspect the locker room will be missing a player or two or three by then. Yesterday there were a few other trades with Ben Bishop going to the Kings and the Wild, Eric Staal’s new team, picking up a couple of solid players. Expect the Wild to go deep in the playoffs and right now have to be one of the favorites in the west.

My predictions at any stage are pure guesses but right now my final four would be the Wild and Blackhawks in the West and Capitals and Penguins in the East. Now that I’ve said it, watch all four get bounced in the first round.

Next home game is Friday, March 3, 2017 at 7:30 PM against Arizona. Good chance for a Friday night, alternate jersey win. Be There!