Cary, NC – The Carolina Hurricanes and the Detroit Red Wings played the back end of a twin bill at the PNC Arena with the Canes controlling the game from start to finish with a solid 4-1 win. It was the first time since their Stanley Cup season the Canes played the same team two nights in a row on home ice and this win extended their point streak to 12 games, also the longest since the 2005-06 season.

With the previous night’s game ending with the collision at the net sending Eddie Lack to the hospital, the great news is he’s fine except for a very sore set of muscles from his upper back to his neck. In talking to Eddie in a one-on-one, he was all smiles, has that infectious smile, is all upbeat about what happened, “it’s hockey,” and is impressed what his team has accomplished and where its headed.

The Wings did start the game with some spark, not looking like a team that should be tired after playing their third game in three days and all three of their previous games went into overtime. And the Canes stepped up their play a notch from the previous night. Cam Ward and Jimmy Howard were in the nets and Matt Tennyson replaced Ryan Murphy on defense due to a lower body injury. With Murph out, he will not have enough games played meaning when the expansion draft happens in June, he won’t be made available. Unless the Canes re-sign Klas Dahlbeck, Justin Faulk would be the lone D-man available so count on the Canes making a move, or re-signing Dahlbeck to protect Faulk.

After the teams played up and down hockey for half of the opening period with the Canes defense all but shutting down the Wings’ ability to get a shot off, Faulk cleared the puck to Derek Ryan at the Canes blue line. Ryan went through the neutral zone, sending a lead pass to Lee Stempniak as he was entering the Wings end. Stemper skated to just inside the top of the faceoff circle then sent a wrister that was perfectly timed as his defender screened Howard as the puck went in for a lead the Canes would not surrender the entire night.

Just over five minutes later the Canes were again pressing in the Wings’ end with Teuvo Teravainen circling with the puck, passed up to Brett Pesce who sent a hard slap shot that bounced off Howard’s pads into the sweet spot on top of the crease. Joakim Nordstrom was being tied up but managed to twist and turn, getting his stick on the puck for a quick shot into the net as he was falling to the ice for a hard fought goal that turned out to be the game winner.

The Canes as a team completely shut down the Wings not allowing a shot for the last 13 minutes of the first and for nearly the first six minutes of the second, with that first shot a gimme for Ward as the official scorer probably took pity as it was only the Wings fifth shot of the game. Jordan Staal’s play this night was markedly better than the previous night as he used his long arms and strength to control the puck on every shift.

Midway in the period, Staal stole the puck in the neutral zone, built up speed then sent a hard shot at Howard’s belly button. At the other end of the ice, classy player Henrik Zetterberg virtually undressed the Canes defense by stick handling down the middle but Ward came up big on a play that may have been a game changer if the puck went in. With the play quickly going the other way Teravainen made a nice cross ice pass to Jaccob Slavin who one-timed a hard shot with Howard making his best glove save of the night.

Later in the period, Staal got the puck at his own, went through the neutral zone into the Wings end, took the lesson learned from his earlier shot and sent a wrister high stick side that seemed to surprise Howard putting the Canes up 3-0.

The Wings came out looking like a desperate team in the third as they only had 10 shots on goal for the first two periods. With just five minutes gone, the Wings had better penetration getting off five shots on goal finally challenging Ward. The period was somewhat like a heavyweight bout at the ninth round with shot after shot but nothing hard really landing.

The Wings finally broke the ice at 13:33 when Tomas Nosek used his big body to reach around the defense and slide the puck past Ward to break his shutout. Even Ward would say, it’s all about points, not personal achievements. The Canes closed out the scoring at 17:22 when Elias Lindholm knock in a rebound off a Sebastian Aho shot while the Canes were on a powerplay. The Canes didn’t gain any ground or lost any ground meaning all games are still crucial and need Caniacs to be in the stands for support.

Next Home game is Thursday, March 30, 2017 against Columbus. Be there! 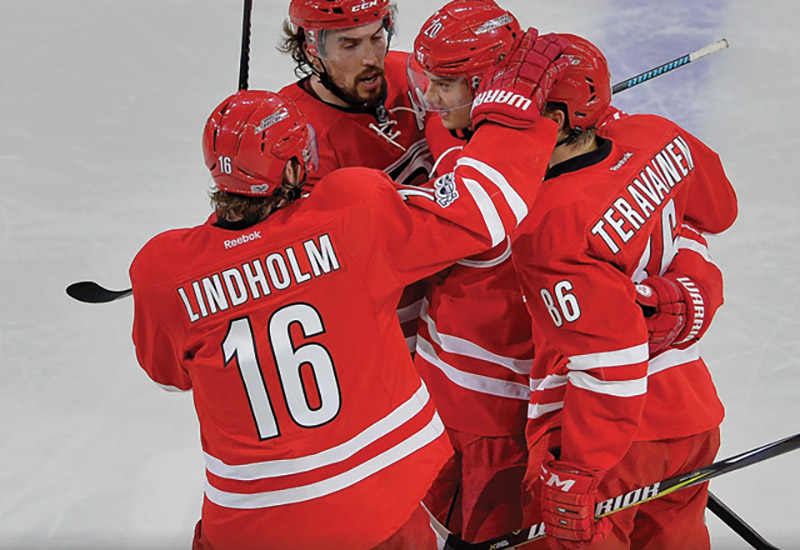