Cary, NC – The Cary Town Council took a look at three items at its latest meeting, with each one taking on lengthy discussion involving councilmembers, town staff and the public in the audience.

Note: Councilmember-At-Large Lori Bush was not in attendance at this meeting.

The only Public Hearing on the Thursday, April 13, 2017 agenda also took up the most discussion time as Town Council heard information on an amendment to the Planned Development District at the intersection of NW Cary Parkway and Evans Road. The proposal is for both sides of the road, putting developments both on the portion that borders Cary Church of God and the portion that is wrapped by Winfair Drive.

The applicant wants the Church of God side, dubbed “Parcel A,” to be a 212-unit multi-family residential area and the Winfair Drive side, dubbed “Parcel I,” to be a senior life care community, likely with the Waltonwood brand attached. With the Cary Community Plan, Parcel I is in a residential section while Parcel A is in an office/commercial section.

As the applicant explained it, the idea is for inter-generational housing: married couples whose children have moved out would live in the smaller apartment units in Parcel A and move their elderly parents and parents-in-law to the life care community in Parcel I. 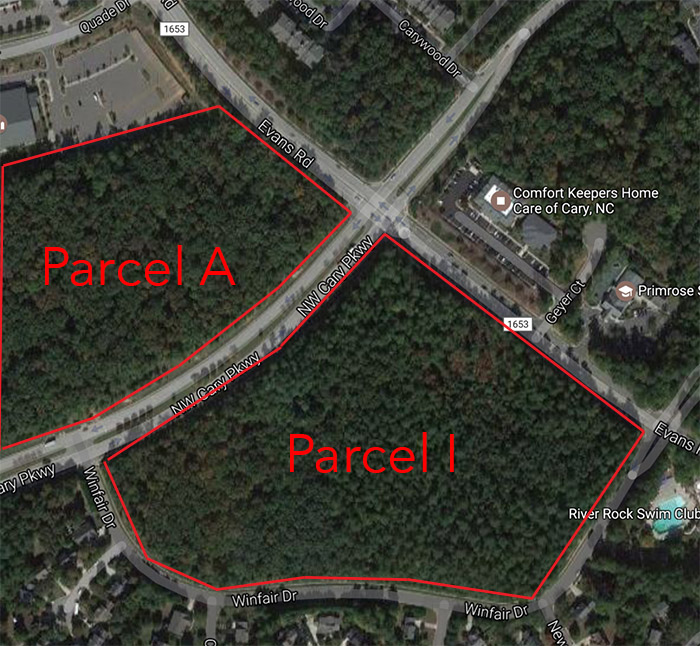 The approximate location and size of both parcels

Public comments were mixed. These two areas have come up several times for redevelopment and have never succeeded and many who spoke out mentioned they had been here before. Most speakers did not share any concerns with Parcel I, although one resident talked about his concerns with increased traffic. But many, save for one speaker, did not want the Parcel A apartment plan. That included the owner of a nearby medical chemistry lab who specifically wants her business away from residencies because of sounds and odors the lab produces and the possibility of damage created by nearby residents.

Town Council was receptive to the life care proposal for Parcel I and while they were more cautious about Parcel A, they found the idea of inter-generational housing intriguing.

“This is the best project you have brought forth yet for this area and I think it’s the best possible use for Parcel I,” said Councilmember Don Frantz.

But included in the amendment request by the applications were promises for items such as aesthetic designs and a travel aisle, though were not listed as conditions.

“If you’re going to promise something, it has to be a condition,” said Councilmember Ken George. “Otherwise it can be a bait and switch.”

Both the applicant and one public speaker mentioned including new traffic signals in the area, though Town Council reminded everyone that the state Department of Transportation makes that determination, not the municipalities.

The proposal was sent to the Planning and Zoning Board.

This proposal, which would cost around $6.4 million, would repair 15 miles of road in Cary or 3.2 percent. And as Cary Mayor Harold Weinbrecht pointed out, not all roads in Cary are maintained by the town, with many of the large four-lane, divided roads maintained by the state Department of Transportation.

Also, as Sammy Wood with the town Department of Transportation and Facilities showed, the cost of repair per mile, proportional to the number of miles repaired each year, has dropped in Cary since 2014. Town Council voted to award the repair bid unanimously.

Finally on the agenda was an item initiated by Mayor Pro Tem Ed Yerha. This deals with the fountain in the new Downtown Park and a unique question it has brought up: what to do with the money thrown in the water?”

“Part of the success of the park is attributed to the fountain,” Yerha said. “And people are doing what they normally do with fountains and throwing coins in it.”

While Yerha brought up the issue to discuss or begin discussing what should be done with the coins, Town Manager Sean Stegall revealed this was already a conversation with town staff. Since the Town of Cary has no petty cash, they can account for the coins put in the fountain.

The idea presented was to put the money into the Relief for Recreation Scholarship Fund the Department of Parks, Recreation and Cultural Resources maintains, which all councilmembers agreed with and voted on unanimously.

“When we’re talking about coins in a fountain, you know we’ve got good problems in Cary,” Frantz said.

At the start of the Town Council meeting, Stegall began his report by talking about the North Carolina General Assembly. In particular, Stegall said numerous bills being considered would impact the town, including affecting how Cary collects impact fees for new developments, environmental laws including changing river buffers and changes several non-partisan elections to partisan. It was this final item that made Stegall go into greater detail.

“We are hearing about a streetscape project today. We have no idea if those homeowners in front of the streets are Democrats or Republicans,” Stegall said, before encouraging residents to go to the Town of Cary website to see a full list of bills staff feels would impact Cary.

Also at the meeting was a reception for culinary students from Cary’s French sister city, Le Touquet. And Weinbrecht revealed that, in a few weeks, he will be the first Cary mayor to personally visit Le Touquet.