Cary, NC – As Cary high schools have increasingly merged music and drama with musical theater productions, two Cary High School students have been named as finalists in a Triangle-wide music competition, culminating with a scholarship and a showcase on Broadway.

Allie Jessee in Into The Woods

Singing on the Big Stage

Chris Inhulsen and Allie Jessee of Cary High School are both finalists for best actor and actress in Triangle Rising Stars, a yearly event where the best students in musical theater from around the Triangle audition for scholarships and a performance on-stage on Broadway in New York City.

Both are finalists for their performances in Cary High’s production of Into The Woods, playing the Baker and the Baker’s Wife respectively. This Tuesday, May 16, 2017, they and 22 other high school performers will audition for a $1000 scholarship for both men and women, taking place at the Durham Performing Arts Center (DPAC).

“I’m excited. I’ve performed at DPAC before in a choir with the North Carolina Symphony but there, I was in the background,” Inhulsen said. “This will be the biggest venue I’ve ever performed in solo.”

Jessee said she is honored and excited for her opportunity, considering she did not expect to be named as a finalist because she is in 10th grade, compared to most other finalists who are in 11th and 12th grade.

“I’m probably going to be the youngest person there and I’ve never performed at DPAC before,” Jessee said

For Inhulsen’s audition, he will be doing two songs: “No More” from Into the Woods and “You’ll Be Back” from Hamilton.

“Most of what I’m preparing for is the interview,” Inhulsen said. “I can sing in front of 1,000 people but have me talk in front of a crowd or give a presentation and I clam up.”

Jessee will be performing “Moments In The Woods” from Into the Woods and “If I Were A Bell” from Guys and Dolls.

“I have been talking with my director and chorus teacher a lot,” Jessee said. “They are very calming and make sure I’m comfortable.” 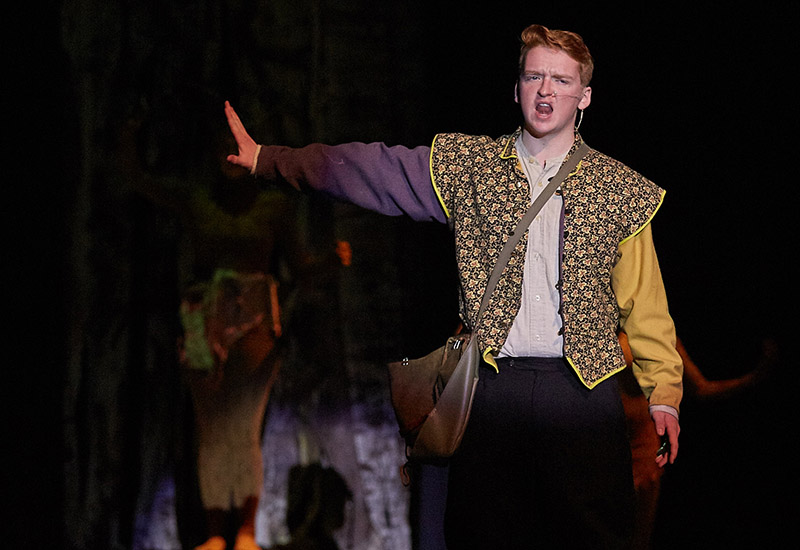 Chris Inhulsen in Into the Woods

Jessee’s interest in musical theater started in sixth grade when she was in her school’s production of The Sound of Music. While Jessee said she had stage fright when she performed in a fifth grade talent show, this was different.

“I realized I loved it,” Jessee said. “I loved being able to share my energy and my music and my happiness with the audience. And that love grows every year.”

For Inhulsen, he described his interest in musical theater as an “accident.”

“I always loved singing and performing and in middle school I was involved in marching band and jazz band,” Inhulsen said. “I come to Cary High School and freshmen can’t audition for jazz band here.”

Inhulsen went to chorus instead and was encouraged to audition for the school’s musical for the season, Willy Wonka and the Chocolate Factory.

“I really wanted to play trumpet in the pit,” Inhulsen said. “But I found the monologue from the musical online a few days before and decided to give it a shot. It was the best feeling I ever got on stage and I knew I wanted to stick with it.”

“My experience with Cary High is we feel like an ensemble,” Inhulsen said. “No one feels above anyone else.”

Jessee said this emphasis comes from their teachers, who she described as their biggests fans and their biggest critics.

“They push us to be a family,” Jessee said. “They want us to believe in each other and support each other.”

And for the Into The Woods production, Inhulsen said they organized nights for bonding activities such as bowling.

“Having that bond make the show a lot better,” Inhulsen said.

The Triangle Rising Stars audition takes place on Tuesday, May 16, 2017 at DPAC at 7 PM.

Allie Jessee and Chris Inhulsen in Into the Woods

Weekend Events: Fest in the West, NC Courage and More
Scroll to top
%d bloggers like this: