Cary, NC – The Cary Town Council held the first Public Hearing for the new fiscal year budget, as well as voted on maintaining the town’s greenways and drinking water supply.

This was the first of two Public Hearings on Cary’s budget, with the possibility for more to be added if the town finds it necessary. Five speakers came forward, either asking for funding for future projects or talking about programs and non-profits that already get funding.

Two speakers talked about preserving and managing forestry in Cary, with one of those speakers representing Keep the Canopy, a group connected to the Stoneybrook Garden Club to protect forests and trees in the town.

Another speaker, a resident from the Downy Village neighborhood, talked about getting a park put in. She specifically aned the Twin Lakes area as a location for the park.

Two representatives from non-profits also spoke to ask that their organizations be included when it comes to funding in the budget. These representatives came from the Special Olympics of North Carolina and Interact of Wake County and talked about the success of their programs. At Cary High School alone, there were more than 300 participants with the Special Olympics and Interact currently sees 23 families a day, expanding their services from seeing close to eight families in previous years.

The next Public Hearing on the budget will be Thursday, June 8, 2017.

If you have lived in Cary long enough, you have heard of the plan to extend NE Cary Parkway, making it stretch from N Harrison Avenue to I-40. But during the Imagine Cary planning process, town staff advised that Town Council not go through with this extension.

Town staff also worked with professional traffic consultants and SAS to analyze the impact of the road extension, both with and without it, and recommended the Town Council do away with it. 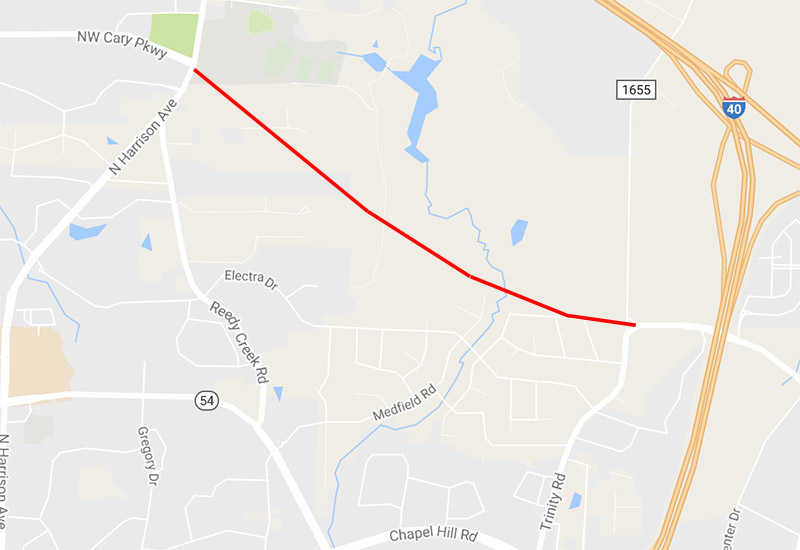 The approximate location of the Cary Parkway extension

Three speakers came out to talk on this item, two of whom were nearby residents who said they never wanted the extension. These speakers also suggested other uses for the land the extension would have run through, such as a park, a greenway or a public school. The third speaker was Mike Ehrhardt, head of school at Cary Academy, which is very close to the proposed extension. He also spoke against the extension and said getting rid of it would make he and the school feel at ease.

The item was then sent to the Planning and Zoning Board for their recommendation.

The final Public Hearing was for a 9.5 acre annexation near the SAS Campus Drive and Trenton Road intersection. There were no speakers on it and Town Council approved the annexation unanimously.

Town Council voted on the bid award for an extension of the White Oak Creek Greenway, closing gaps and extending it to connect with the Black Creek Greenway. With its connection to the American Tobacco Trail as well, this would ultimately result in a 14.5 mile greenway. The plan also includes building a new trailhead on Green Level Church Road.

“Greenways and parks are the jewel of Cary,” said Councilmember-At-Large Lori Bush.

This project would include funding from Apex, Wake County, the federal Department of Transportation, as well as community bonds. Councilmember Don Frantz said he has been frustrated in the past with greenway projects where Cary was the primary funder but was glad the funding was more balanced now.

The bid, for $3.4 million, was voted for unanimously.

The other Discussion Item was for Phase 8 of the Triangle Area Water Supply Monitoring Project Interlocal Agreement. This extends the agreement through to 2022 and does not include any significant changes. Town staff also noted that water quality has improved over the years in Cary, noting new policies in place such as riparian buffers.

“That’s something we should share with our state representatives,” said Councilmember Jennifer Robinson.

While this could arguably have been part of the budget Public Hearing, one speaker with Gigi’s Playhouse spoke at the Public Speaks Out segment to talk about the work the local Down Syndrome achievement center. She said the non-profit now works with 165 families, had 600 volunteer hours from April to May and shared the success stories of some participants in their programs.

Another speaker shared her concerns with a possible development around her property around the southern part of the Cary Parkway and US-1 intersection. She said the proposed development would restrict access to Cary Parkway.

Two speakers also shared their thoughts on the Trimble Avenue rezoning, which involved potential Habitat for Humanity homes coming in to be used for affordable housing. Since this last went before Town Council at a Public Hearing, the Planning and Zoning Board voted 5-3 against the rezoning.

The two speakers had opposing views on the matter. One speaker, a member of the Committee for the Future, said she wanted affordable housing and was worried about the state of the Habitat for Humanity plan and urged the Town Council to approve it when it eventually came up.

The other speaker was a resident in the Scottish Hills neighborhood where the Trimble property lays. He said he wants what goes into the property to fit in with the community and neighborhood. He also accused Habitat for Humanity of not facilitating further communication and said they were spreading misinformation to paint the neighborhood residents as opposing the affordable housing on racial or socioeconomic grounds.

There is currently no date set for another Public Hearing or Discussion Item vote on the Trimble Avenue rezoning.

2017 Memorial Day Events In and Around Cary