Cary, NC – This was a week of ceremonies, events, and meetings.

Monday I joined council members Frantz, Bush, and George at the Cary High School graduation. There were a little over 500 graduates. On the hoot-n-holla behavior scale I would give Cary High a well behaved 8. Their graduation ceremonies are always a class act. It is always fun for me to see the graduate’s faces as they receive their diplomas.

Tuesday I signed papers to call a special meeting of town council early next week to consider an Economic Development opportunity. This opportunity is moving fast so the meeting had to be called outside other scheduled council meetings. Hopefully we will have a big job announcement soon.

Later Tuesday I talked with a News and Observer reporter about the council’s practice of not passing resolutions or making public statements on state and national partisan issues. The council and staff will discuss this practice in a future work session.

My last meeting Tuesday was with homeowners who stated their private pond was being impacted by a nearby development. Just as an FYI, council is not involved in operations and enforcement of developers. Our staff is responsible for making sure developers follow regulations. Beyond that the town has no authority. So if this issue escalates beyond enforcement it will be a private legal matter. 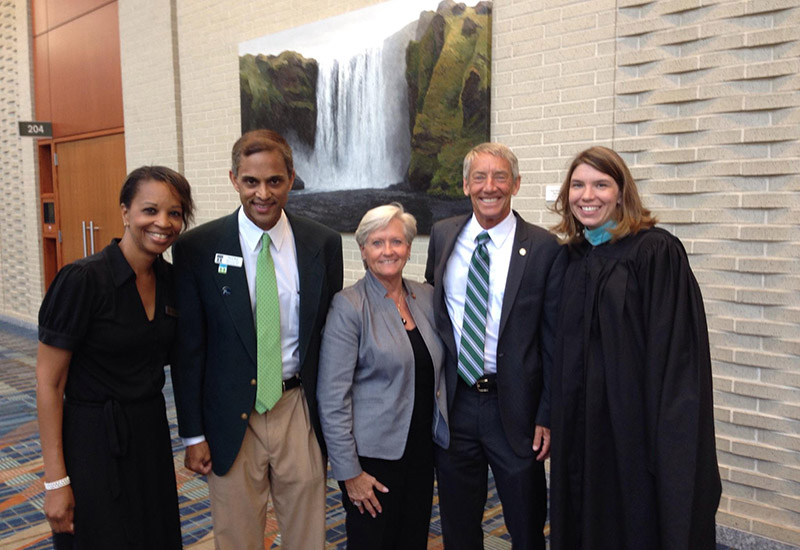 Wednesday I attended the graduation ceremony of Green Hope High School. I was joined by former Cary Mayor Pro-Tem and NC Legislator Gale Adcock, former Cary council member and Wake County Commissioner Erv Portman, and Cary council members Bush and George. There were over 600 graduates including the twin daughters of Principal Karen Summers (what a sweet moment of hugs and tears). On the hoot-n-holla behavior scale it was about an average of 5. Interestingly, I noticed that most graduates appeared to be of Asian descent which speaks to the diversity of Cary and neighboring communities. It also appeared that over half the graduates were honor students. I enjoyed the ceremony and was glad I had the opportunity to watch each of the 600+ faces as they received their diplomas.

Thursday I was interviewed by WUNC radio about why I didn’t sign with the other mayors on the Paris Climate agreement. It was a short succinct article that captured my thoughts well. See http://wunc.org/post/why-carys-mayor-didnt-sign-climate-letter-opposing-trump. 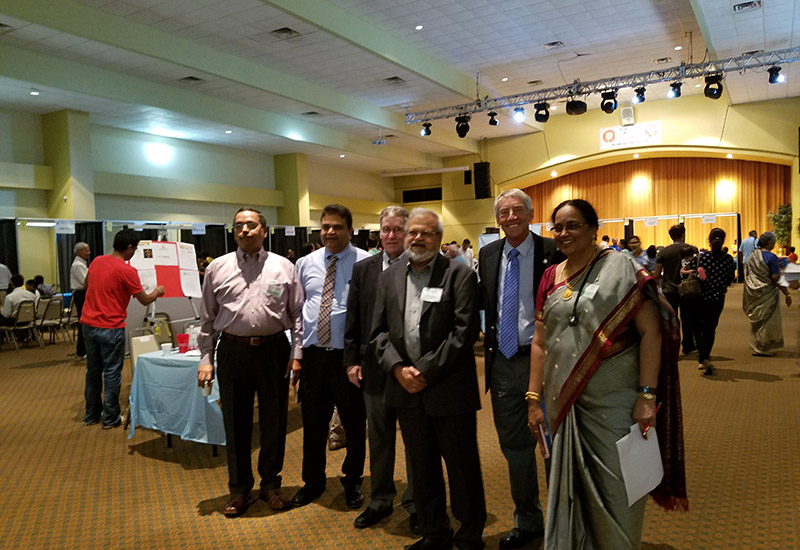 Saturday I joined Mayor Pro-Tem Yerha at the free annual Healthfair which held at the Hindu Temple in Morrisville. This was started years ago by physicians who wanted to give back to their community. They cover every field imaginable in medicine. Over 50 physicians give free service for a day to those who are poor or don’t have health insurance. In addition, some of these physicians serve those in need year round at the NCIAP Medical Care clinic in Raleigh. Bless them for all they do for those who need it most.

On Thursday, the NC Senate voted to pass House Bill 55, a local bill authorizing the Apex Police Department to serve Apex High School students while the school is located in Cary due to major renovations. This bill was part of Cary’s Legislative Agenda for 2017. A special thanks to Representative Adcock and Senator Barringer for introducing this bill.

On Friday, staff worked closely with our lobbyist, Jack Cozort, on Cary’s comments as it relates to HB310 (Wireless Communications Infrastructure Siting bill). We will be sharing our bill comments with committee members and continue tracking this bill closely.

On Monday, Moody’s Investor Service published an annual comment on the Town of Cary’s General Obligation rating of Aaa.  Any municipal unit that hasn’t received an official rating in two years will receive an annual issuer comment from Moody’s which updates the credit overview and key ratios.

To quote from the report: “Cary has an outstanding credit position, and its AAA rating is well above US city median rating of AA3.  The credit profile reflects a sizable tax base, above average resident wealth levels, and a very strong financial position.  The credit profile also reflects a manageable pension liability with an exceptionally light debt burden.”

Prior to the June 8 Council meeting, the Police Department’s Traffic Team had looked into neighborhood concerns over speeding on Urban Drive. In late May, the Police deployed speed sensors on Urban Drive, near Waldo, during a one-week period. 2008 vehicles were captured (average of 287 vehicles per day). The average speed was 20.9 mph. The sensory also calculates the 10mph speed range in which the majority of the vehicles are traveling. The majority of the vehicles were traveling between 17-27mph. During the seven day period, there was one car that did travel 37mph. This was the second time Police had deployed the speed sensory in this location with similar results.

Upon further conversations with a citizen from Public Speaks Out on June 8, we learned of two specific locations that did not have speed limit signage. Last Friday, Police confirmed these two spots (on Webster and the 100 block of Urban) could use additional signage. These signs have now been installed with a posted speed of 25 mph. Furthermore, Assistant Chief Quinlan monitored the area for an afternoon and did not observe any speed limit or stop sign violations.

Technology Services hosted a town-wide open house for employees to learn about technology initiatives happening now and in the future. This also provided an opportunity to view the re-designed office space. There were panel sessions with Managers and Team Leads on different subjects and exhibits showcasing projects such as the Salesforce/Chatter platform as well as Office 360 implementation.

On June 8 and 9, staff from GoCary and Cary Senior Center participated in a seniors’ fair at St. Michael’s Church titled “Live Well at Home.” Town staff was able to provide valuable education and resources on topics such as our existing recreational programs at the Senior Center and our transportation options via GoCary.

Staff from Transportation & Facilities and Utilities teamed up for problem solving! The team used an innovative approach to detect thermal imaging associated with an air leak in a buried pipeline that conveys aeration from the main blower building to the biological reactor basins at the South Cary Water Reclamation Facility. Local engineering and surveying firm, Withers and Ravennel, provided the technology and conducted the test.

Transportation & Facilities staff was able to evaluate the information gathered and incorporate the imagery into a model that the Town crews have marked with GPS coordinates. Additionally, Utilities staff will use the data to plan for repairs of the pipeline.

On Tuesday, approximately 70 citizens attended an open house to learn more about the upcoming Cary Parkway and High House Road Intersection Improvements Project. Attendees were able to view the final designs and get information on the construction anticipated to begin this fall. We received positive feedback from those who attended about both the experience of the open house and the intersection improvements project.

The first phase production bakery is now open! The bakery will have the option for grab and go breads and pastries and will also have their food truck on-site for breakfast and lunch. Second phase will focus on the retail bakery/cafe and the 5600 square feet of retail lease space. Great news for downtown Cary!

Above is a picture of the latest group of Community Emergency Response Team (CERT) graduates. CERT training is a program designed to enable citizens to care for themselves and their neighbors during the first three days following a disaster event. Participants are educated about disaster preparedness, CERT organization, light search and rescue, medical care, fire extinguisher use and disaster psychology. Thanks to our Fire Department, in particular Alicia Dismuke and Loren Cone, for organizing this important community service.

The construction and activity report for May included the following:

Emails this week included the results from the million step challenge competition between Wake County and Cary which was held over 8 days. The following is the email with those results:

We now have all the data in from last week’s Million Step Community Guest Challenge. This was the first time we had two community guest challengers with both the Town of Cary and Wake County Commissioners participating.  It was an amazing week as both teams really “stepped it up” (pun always intended) and came out with two of the strongest community guest challenger results to date.

The Wake County Commissioners had an average of 10,314 steps per day per participant (the third strongest performance by a community challenger during our 16 week challenge). However, the town of Cary proved to be unbeatable (or almost unbeatable…see below) as they averaged an amazing 13,489 steps per day!  This was the most of any competitor to date besides Team Senator Tillis – who, rumor has it, walked non-stop laps around our nation’s capital to get 14,033 steps per day per participant during their challenge week in March.

A very special congratulations to Cary Mayor Weinbrecht who averaged 18,228 steps per day, which is the top performance of any individual community guest challenger during the entire competition.  Congratulations also to Dara Demi with Wake County who led her team with 14,488 steps per day.

Fun competition aside, a very special thanks to both the Wake County government and the Town of Cary for participating – your involvement and support of our participants from Advance Community Health and Alliance Medical Ministry is very much appreciated. As we all work together to develop healthier communities, empowering patients to take control of their own health through healthy lifestyle choices (including being more active) will be essential.

So now for the truly impressive part – even with the strong performances reported above, one of our participant challenge teams was still able to edge out both community guest challengers: Team Joyner from Alliance came in a with an amazing 18,226 average steps per participant per day!  It has been very inspirational to see so many of our participants not only meet, but shatter, their individual million step goals for the challenge over the past 16 weeks.  We have one participant that has passed 2 million steps!

Next week will be busy for me. Activities include talking with a group of people about state of the town issues, a special meeting to consider an economic development opportunity, a meeting of the Wake County Mayors Association, a council work session, a meeting of the CAMPO (Capital Area Metropolitan Planning Organization) executive committee, a regularly scheduled council meeting, and the downtown park dedication.

Well, that is all for this week. My next post will be on Sunday, June 25th.  Although I have Facebook and Twitter accounts those are not the best means of communications with me. Please send all Town of Cary questions or comments to Harold.Weinbrecht@townofcary.org and email personal comments to augustanat@mindspring.com.