Cary, NC – With the expansion of the Triangle’s bus system and the rebranding of C-Tran to GoCary, there is more of a push and advertising for Cary residents to take the local bus system. So if you have never tried and are interested in giving it a shot, here is a handy guide to riding GoCary.

If you are used to taking bus systems, GoCary’s Fixed Route Service will be easy for you to understand and adapt to. All you need to learn are the specific routes and where they lead.

GoCary is made up of six main routes: four for the outer limits of the town and two that encircle Central Cary. Using this organizational method, you can easily plan out your trip. For example, if you are moving East to West or North to South, you can stay on the same route or make one easy transfer when you make it to Downtown Cary and continue in the same direction. Or, if you are moving East to North or West to South, you can take one of the two Central Cary routes and take that to your nearest line.

One-way fare – that is, the cost to get on the bus – is $1.50 and can be paid in cash once getting onboard but a full day pass is $3.00. Full weekly, monthly, regional and other forms of passes can be bought online. 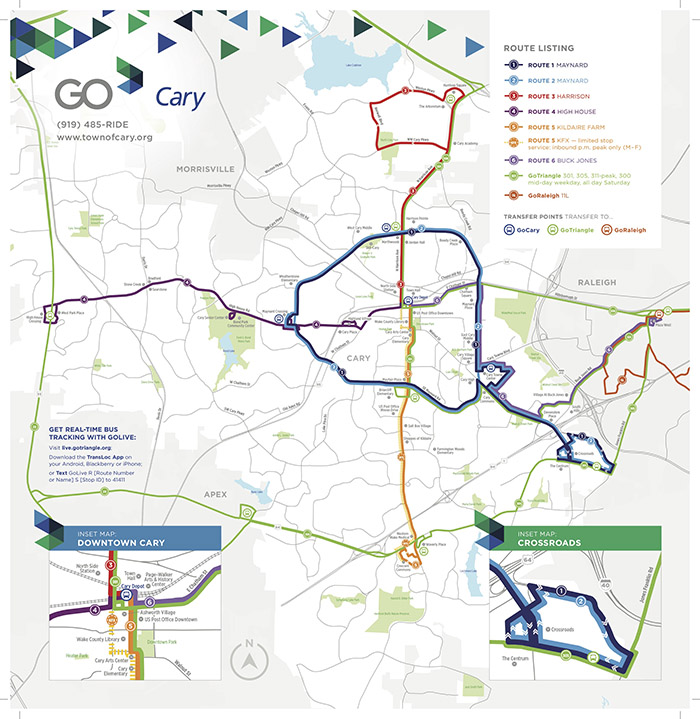 The specific stops for the six bus routes in Cary are as follows.

For Route #5, there is also an express route with limited stops that goes between Crescent Commons Drive and Downtown Cary. It operates between 3:44 and 5:28 PM Mondays through Fridays.

And you can find the specific times for each route online, which run Monday through Saturday, from roughly 6 AM to 10 PM.

The GoCary Route also links up with the GoTriangle and GoRaleigh routes to travel outside of Cary. To transfer to GoRaleigh, you can only go with the Plaza West stop on Route #6. But GoTriangle intersects with GoCary at several points all over the town, including at the last stop on Routes #3 through #6, as well as Northwoods Shopping Center, Mayfair Plaza, Crossroads and the Cary Bus Depot in Downtown Cary.

And if you need further assistance with transportation because of age or disability, look into GoCary’s Door to Door Service System.