Cary, NC – This was another busy week in the mayor’s office.

Monday started with a videotaping at MacGregor Downs Country Club as part of their 50th anniversary celebration. In my taping I talked about how the MacGregor Downs neighborhood and country club were one of the premiere country clubs in North Carolina at the time they were built and still are. They set the standard for the Cary we know today. I am an honorary member at MacGregor Downs but have never used that membership. I appreciate the club for its beauty and for all they mean to our community.

Monday night I joined eight other Wake County mayors at the monthly Wake County Mayors Association meeting. The only mayors missing were mayors from Raleigh, Garner, and Rolesville. They were committed to other events. In our round table talk we discussed many things especially partisanship since it is within a month of municipal elections. I think it is safe to say that we all believe partisanship has absolutely no place in municipal elections and can only harm the job we are trying to do to better our communities. Another topic talked about was related to growth issues. All the smaller municipalities in Wake County are now experiencing lots of pressure to grow and all the issues that come with it. It will be interesting to see if that has an impact on their municipal elections. Our meeting concluded after about two and a half hours.

Tuesday I joined council members in attending the annual boards and commissions dinner. At this dinner we honored outgoing members, welcomed new members, and heard from each board about what they have accomplished and what they have planned. This year’s event included a trivia event won by my table thanks to the historic commission members, parks members, and Page-Walker members at my table. Cary is blessed to have so many citizens that are willing to sacrifice time out of their daily lives to serve on our boards and commission which in turn makes our town better. This is another reason why Cary is one of the greatest places to live, work, and play in America.

Wednesday I attended the executive board meeting of CAMPO (Capital Area Metropolitan Planning Organization). There are close to 30 members of this board. The agenda included one Public Hearing and five discussion items. The discussion items included an update of the FY17 LAPP (Locally Administered Projects Program). It was noted that several municipalities had not used the money allocated to them for this fiscal year. You can find out more at http://www.campo-nc.us/funding/locally-administered-projects-program. Other discussion items included the Transportation Improvement Program, the Public Transportation Strategic Plan, and a Wake Transit Implementation update. Information was also provided for the operation budget and projects. It should be noted that CAMPO has a staff funded by all the municipalities. There is also has a technical review committee made up of staff members from each municipality that reviews items and creates the recommendations for the executive board. Our meeting concluded after an hour and a half.

Thursday I attended the Cary Council candidate forum at the Mayton Inn. There were close to 100 people in attendance. Races for this year include the at-large, district A and district C. I am grateful for the candidates that appeared. Interestingly 3 candidates did not show even though they are asking us to vote them in to represent citizens. Here is my take on the forum. Of course, I am biased to my friends who are already on council.

In the at-large race I thought our Mayor Pro-Tem Ed Yerha did a fabulous job. I know him and his thoughts very well and which are very much in line with mine. I wholeheartedly endorse him. Mr. McDowell started off his comments by saying he was running symbolically to make a point about trees. In his closing remarks stated that growth should be stopped until the issue of trees has been resolved. There are two problems with that statement. One, we don’t have authority to stop growth. Anyone can develop their land at any time. Two, a one issue candidate can be a real problem especially when we deal with dozens of issues simultaneously. While I applaud his passion for trees I don’t think that is enough to serve the citizens of Cary.

In the district A race only Jennifer Robinson bothered to show up. Shame on those other candidates. Jennifer has been on council for 18 years and knows a great deal about this town and how it is developed. She has also great influence on developers making sure they provide the highest quality. For me, that race is a slam dunk for Jennifer.

The district C race had both candidates show up, incumbent Jack Smith and Ken Presting. They both did a good job of answering questions and both were knowledgeable about the issues. Presting did mention a couple of times his ties to the Democratic Party in his answers. Any partisan politics creeping into the non-partisan town government is always a concern to me. Jack Smith, the longest serving council member ever, gave strong passionate answers as one would expect. With his background and knowledge I can’t imagine anyone better to serve the next four years. 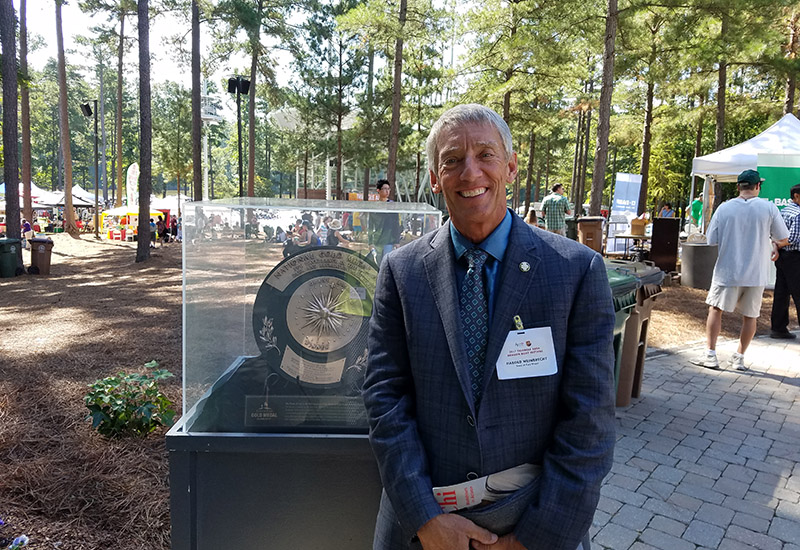 Saturday morning I spent about two and a half hours at the 4th Dragon Boat festival at the Booth Amphitheater. The Dragon Boat festival started over 2,300 years ago in southern China during the Zhou Dynasty. The festival includes Dragon Boat races, food, entertainment, and other cultural items. While most of the cultural items and performances where Chinese, there were many other cultures represented and celebrated as well. The Dragon Boat races included over 30 teams from all over North Carolina. Two youth with Turkish ethnicity escorted me to my seat before I was called on to provided welcome remarks. 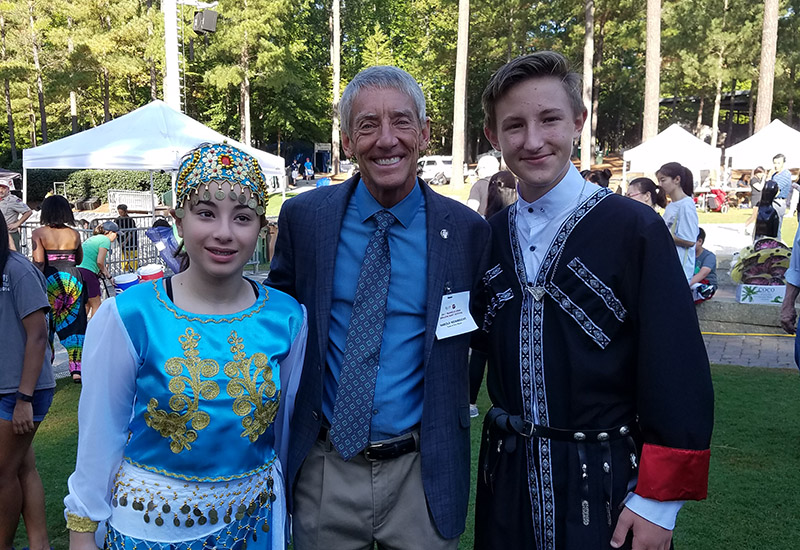 After the welcome I had the honor of having my picture made with boy scouts who were the color guard for the event. Then I toured all the vendors and met most of the race teams. It was a lot of fun and a good time for everyone. 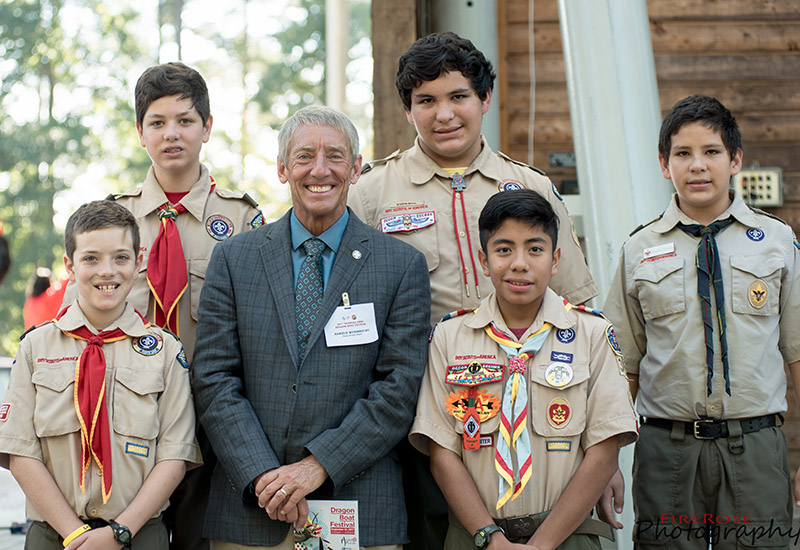 Saturday night I attended the Nepal Center of North Carolina’s Dashain celebration. Dashain Festival is a popular holiday among both Hindus and Buddhists in Nepal and is celebrated wherever they live. In Nepal, Dashain is the longest and most notable festival on the calendar, and many Nepalese expatriates actually return to Nepal specifically to observe Dashain Festival in their homeland. This festival, held at the Herb Young Community Center, had over 100 people in attendance. I joined Mayor Stohlman and Mayor Pro-Tem Rao from Morrisville in giving remarks.

Tuesday evening’s Crossroads Ground Storage Tank neighborhood meeting provided Cary and Raleigh residents an opportunity to view preliminary designs and have one-on-one conversations with staff and consultants. Built on property Cary owns in Raleigh, this three-million gallon tank, pump station and interconnections with Raleigh’s water system completes our 2012 interlocal agreement which further enables us to exchange water in emergency situations with the City of Raleigh. It also provides us with additional storage capacity and increases our operational flexibility and resiliency. Working to address regional mutual aid needs, Raleigh and Cary are partners on this project; Cary is managing the construction and will operate and maintain the tank and pump station. Raleigh is contributing to portions of the project costs. Construction is anticipated to begin summer 2019 and conclude winter 2021.

Earlier this summer, GoCary participated with GoTriangle in a competitive federal grant to secure electric bus technology for the region. This week, GoTriangle learned that we were not awarded the federal grant. The statement from GoTriangle is below.

“We are disappointed to learn that the Triangle region was not awarded a federal grant for electric bus technology, but this collaborative application process has better prepared GoRaleigh, GoCary, GoTriangle and Chapel Hill Transit to explore viable alternative options moving forward.

We now know that electric or other low and no emission buses could be a good fit for routes throughout our region, and we will continue to look for additional funding opportunities together to make the technology fiscally possible.

GoRaleigh, GoCary, GoTriangle and Chapel Hill Transit submitted an application through the federal Low or No Emission Competitive Grant Program in June for $3.27 million, in hopes of covering about half the cost of seven Proterra 40-foot electric buses that cost about $980,000 each, including charging stations and other needed equipment. The largest federal grant awarded in the most recent round was $1.75 million. A standard diesel bus costs about $500,000.”

On Sunday afternoon, the Town celebrated the one year anniversary of Good Hope Farm. In its first year, the Farm has partnered with four nonprofits to provide farmland to emerging agribusinesses, provide education to our community, and began the renovation process of the historic structures on the property. Council Members Jennifer Robinson and Ed Yerha shared some remarks about what this project means to Cary. Council Members Lori Bush and Jack Smith were also in attendance.

Last week, the Town held a Community Meeting at Fire Station No. 2 for the Fire Station No. 9 Relocation project. The new station will be located at 1427 Walnut Street across from Walnut Street Park. Construction is anticipated to begin next summer. Almost 40 citizens attended the community meeting. Thanks to the FD Work Team, FS#2 staff, and PW Special Events staff for making the event a success!

The Capital Area Metropolitan Planning Organization (CAMPO) Executive Board met on Wednesday, September 20. The public hearing for the Prioritization 5.0 Modal Candidate Project Lists was continued from August’s meeting. The board heard and reviewed public comments. After the public hearing was closed, the Board approved the Project Lists for submittal to NCDOT. For the CAMPO region, 43 projects (the maximum allowed) will be submitted in following transportation modes: Bicycle/Pedestrian, Highway, Rail, and Transit, plus one aviation project.

The Executive Board also received information on the several agenda items:

The next Executive Board meeting was rescheduled to October 25.

Special thanks this week goes to our Transit team for their work organizing Try Transit Week for the citizens of Cary. Thanks to their efforts and the efforts of the regional transit community, Cary citizens, seniors and bikers were afforded free rides on special days throughout the week.

Next week’s activities include school visits, a Special Olympics fundraiser, writing an episode of Cary Matters, and writing an updated version of the State of the Town.

Well, that is all for this week. My next post will be on Sunday, October 1st.  Although I have Facebook and Twitter accounts those are not the best means of communications with me. Please send all Town of Cary questions or comments to Harold.Weinbrecht@townofcary.org and email personal comments to augustanat@mindspring.com.