Cary, NC – When most people go to a rock ‘n’ roll concert, they are lucky if they get to see three bands perform on stage. But in the upcoming Carolina Uprising show at Koka Booth Amphitheater, audiences will get to see seven bands play music from across the generations.

Two of those bands, Poco and Pure Prairie League, have been playing and touring around the United States since the 1960s. Mike Reilly from Pure Prairie League said North Carolina has always been a warm and welcoming place for concerts.

“Our former lead singer lives in Pinehurst and we recorded our last CD there. One of my favorite barbecue joints is in Asheville,” Reilly said. “It’s a good location.”

Rusty Young from Poco said they have played in North Carolina over their nearly 50 years of playing music professionally and are looking forward to meeting with fans both as they play and after the show for autographs.

“We’ll meet people who saw us play back when they were in high school in the 70s,” Young said.

At this show, Young will be playing music from his new CD “Waitin’ for the Sun” as well as Poco classics. He said mixing up the set lineup with different songs is one way to keep every show fresh.

“The musicians in the band are very talented. The guys are really fun to play with and the audience is always different,” Young said. “It’s never the same show night to night.”

Reilly said the chemistry between himself and the other Pure Prairie League band members helps keep his shows fresh every night.

“We play for each other and when the audience sees the fun we’re having together, they join right in,” Reilly said. 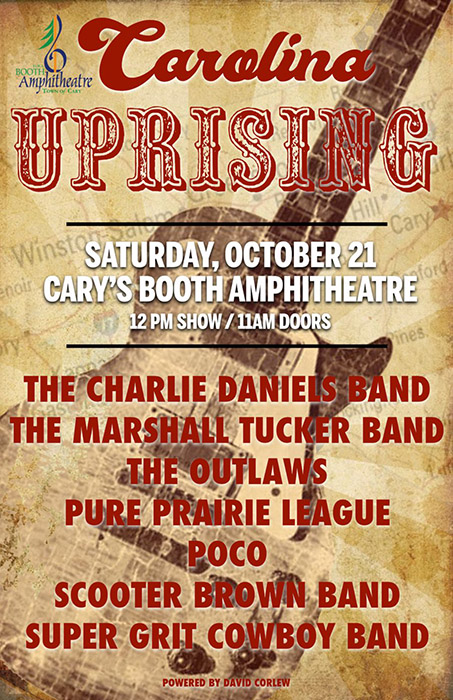 With such a large show with seven bands, both Young and Reilly said it gives all the musicians a chance to meet friends in other bands and listen to each others’ music.

“I’ll get to see a lot of old friends and we’ll be supporting each other on the side stage during our sets,” Reilly said.

Young said he has friends with members of several of the bands on the bill.

“I knew the Marshall Tucker Band back in the day and it’ll be good to catch up with the Outlaws,” Young said.

With so many bands who have played for so long, Reilly said all the musicians are playing better and smarter now and are taking care of themselves.

“We still throw down,” Reilly said. “We’re just not throwing up after.”

Gates open at 11 AM, show starts at noon