Cary, NC – Sun at high noon, clouds dotted across the sky, the grass in a triplet of colors. The clack of wooden sticks clicking with the constant beeping of the metronome piercing the summer air. All while 170 high schoolers march on a field. The Green Hope Marching Band started camp last week. The two time Semi Finalist band looks to leave its mark on the Bands of America Super Regional this year. The Falcon Regiment has 172 members this year, which is one of its highest numbers yet.

Auditions happened in May and throughout the Summer; the instrument sections have been meeting up and practicing all throughout the Summer. The youth and veterans of the band spent hours getting to know the show music and learning the technique, but it wouldn’t be band camp without the bonding and building harmony between members. This camaraderie is trademark to the Green Hope Band “family.”

“The sectionals were a great opportunity to meet the new members of the Alto section! Additionally, aside from socializing, we were also able to really start digging in some of the work,” said Bryan N., Alto Saxophone section leader. “I’m really excited especially because of the strong group we have this year. The show idea ‘Unchained’ is also really awesome in my own opinion. Of course, it’ll be tough but the work we put in will definitely be worth it.”

“I’m excited but I’m also wary to make the most of the season because it is my last one,” said Senior Drum Major John Z.

New member Emma H. described marching band as, “Very fun and enjoyable. Very intense and tough though. Everyone in the marching band program though, is very supportive and helpful.”

Green Hope is aspiring to have another great season this year with their show theme “Unchained.” Their main band camp, where the marching band gets a lot of the their work in the season, has been happening for the past two weeks and has ended this past Friday. After that, they have practice scheduled three times a week and this work carries on into the school year. After a month, they will start performing in competitions until they arrive at the end of their season in Atlanta.

“The summer between the end of school and the start of camp tends to be more student led, with sectionals, conditioning and social activities. The band came together for the first time two weeks ago for pre-camp: first-year training, percussion and guard camp, leadership training,” said Brian Myers, Green Hope’s marching band director. “The students, staff and chaperones are excited about the season and have enjoyed already seeing such great work and progress.”

“Now that the season is off to a great start, everything is rolling. All of the members in this organization are very excited for this upcoming season, as it could be our best yet,” said Aaron Tucker, director of the Percussion program at Green Hope. “Also, this group is very culturally bought in. They are very committed to the Green Hope Marching Band, which is great for the program.”

The Green Hope band performed in numerous competitions throughout the season: August 26th at The Cary Lazy Daze festival, September 30th at Panther Creek High School, October 6-8 at The Bands of America Regional in Newark, Delaware.

Their final competition is at the Bands of America Super Regional in Atlanta on Saturday, October 28, 2017. The Green Hope Marching band has been to this regional in the past, most recently in 2014. 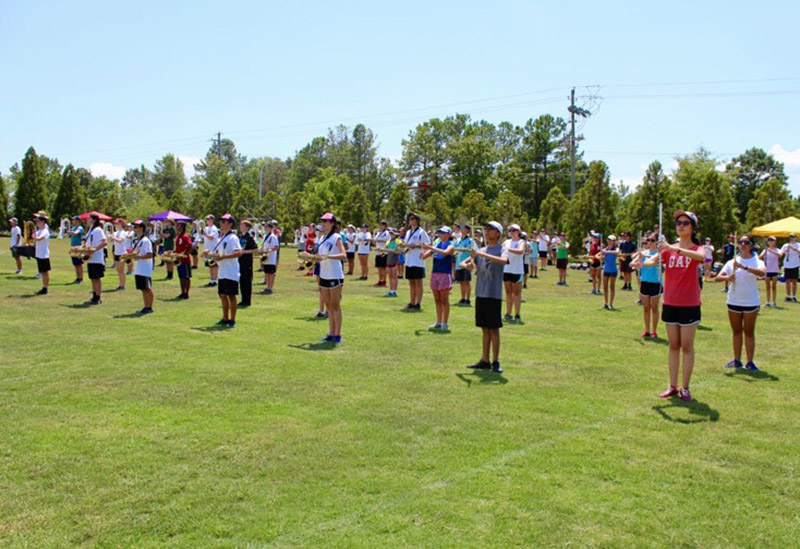 Story and photos by Sohan Singh.