Morrisville, NC – While Cary and Raleigh had their earlier October election date, Election Day in Morrisville is coming this November. All candidates gathered in a candidate forum to discuss the issues ranging from road construction to the business community to the new Morrisville Town Center. 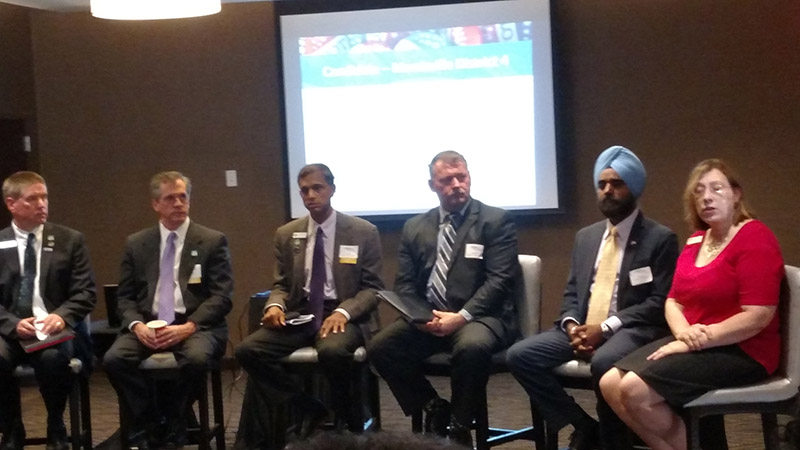 To see candidate questionnaires sent to CaryCitizen, look at our Candidate 2017 series.

All six candidates on the ballot were at the Hyatt House Raleigh Durham Airport on Tuesday, October 17, 2017 to talk about the most pressing topics in the election. The event was organized by the Morrisville Chamber of Commerce and moderated by Joe Stewart with the Independent Insurance Agents of NC and the Free Enterprise Foundation.

Only two races are competitive in this election: the mayor’s seat and the District 2 seat. Both Mayor Pro Tem Steve Rao and District 4 Councilmember Vicki Scroggins-Johnson were present at the forum but they are running unopposed.

Traffic came up in response to most questions at the event, starting with the opening question of where Morrisville would be in 10 years. Morrisville Mayor Mark Stohlman, who is running for re-election, said the future of Morrisville is in how the town utilizes redevelopment but also the new Town Center on Town Hall Drive and Jeremiah Street.

“We need to make sure it is high quality and low impact on our roads,” Stohlman said.

Councilmember TJ Cawley, currently representing District 2 and running for the mayor’s seat, said the future of Morrisville is in walkability and making a healthier community, while also promising better schools and more festivals.

Due to district renumbering, Cawley is no longer eligible to run for the District 2 seat so there are new candidates running for that position. In the District 2 race, both candidates Guri Burmi and Jerry Windle are new to political office. Burmi is the president of his local Homeowners Association and Windle is a veteran of the U.S. Navy and works at Duke Health. Burmi also said the new Downtown built around the Morrisville Town Center will be important for the town’s future and character.

“I would like to keep the feel of a small town here,” Burmi said.

Windle said in the next 10 years, Morrisville would see more traffic congestion and now is the time to focus on controlled development.

“On our current path, Morrisville will look like a sea of houses with no infrastructure,” Windle said. 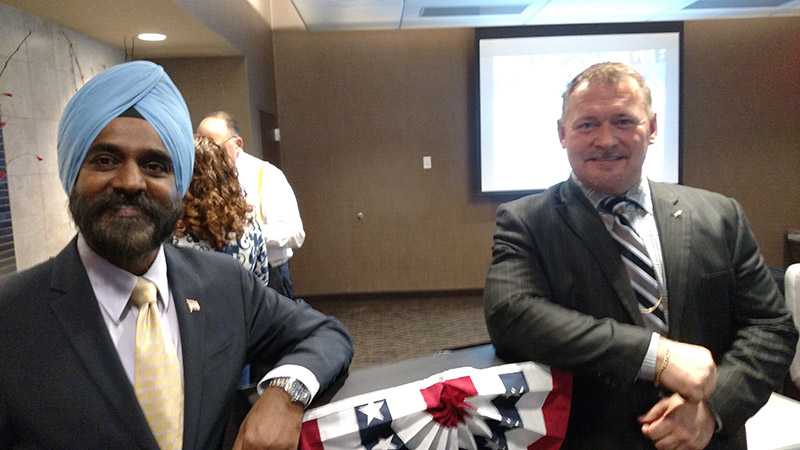 Related to traffic, both Burmi and Windle were also asked about using Town of Morrisville funds on state roads, as most of Morrisville’s roads are state roads. Burmi said he would but these would need to be partially funded and be examined on a project-by-project basis. Windle said he was upset road and traffic infrastructure were not put in place before developments started and said he wants to look into the future when planning for roads.

On a separate question about quality of life in Morrisville, Stohlman said Morrisville has been actively working on building roads and cited the progress in securing new funds from the North Carolina Department of Transportation for road construction and expansion.

“You can look at the work in the past four years and decide if you support that leadership,” Stohlman said.

Cawley said the main hinderance to Morrisville’s quality of life is traffic and said he would be able to guide the town through these projects.

“I want you to spend more time with your families and less time in cars,” Cawley said.

“We have three stops in town and they’re all at employment centers. There are many other people here who want that access,” Scroggins-Johnson said.

Rao also emphasized the work he said the Morrisville Town Council has already done on road improvements and said he will continue to do so.

“We have come a long way in the last four years,” Rao said. “We have done more than any other council.”

The other topic that got the most discussion in the candidate forum was the coming Morrisville Town Center. All candidates were asked if they supported the plan and all did, though Windle said he would have preferred for a town center or Downtown to develop organically. He also said he would want more public opinion on the future of the center. Burmi said giving Morrisville a clear Downtown will be important but wants to develop it without raising any taxes.

Stohlman said in addition to the benefits of the center and its library, it will increase value on the property there. Cawley said while there were originally opportunities to put other public facilities on this property such as a youth or a senior center, he supports the Town Center plan and wants to bring in more investment.

Both Scroggins-Johnson and Rao both support the plan as well, comparing it to the growth in Cary’s Downtown in recent years.

On the subject of economics and business, Stohlman and Cawley were both asked what initiatives they see to best grow business in Morrisville. Stohlman said the best way to both attract and build business is with an educated workforce and a low tax rate, both of which he said he has worked to maintain. Cawley said the town should expand its relationship with the Morrisville Chamber, while also saying the 400 acres at Perimeter Park offered an opportunity to create a “mini-RTP.” 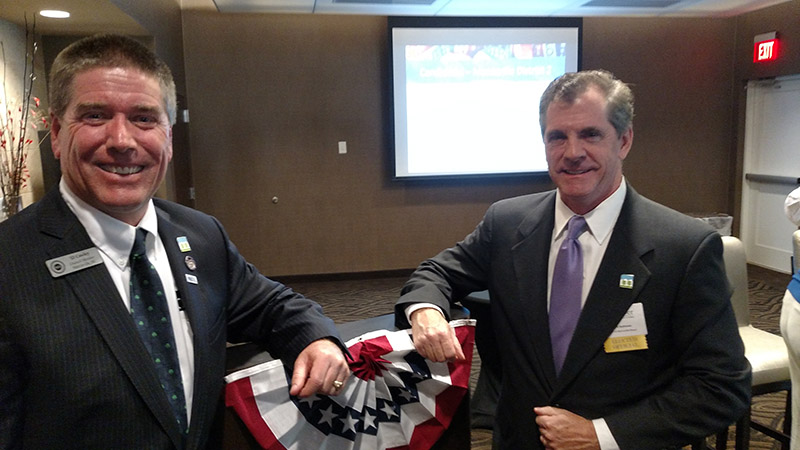 Also, both mayoral candidates were asked about using bond referendums and debt to pay for projects. Stohlman said it is one of the cheapest ways to get funding for projects and feels good about letting citizens vote for these bonds.

“I look to the citizens for our next projects,” Stohlman said.

Cawley talked about using bonds to pay for facilities and used this to talk about how in situations such as the expansion of Aviation Parkway, land for development can be lost so the Town of Morrisville needs to be proactive.

“We need to get work started before we lose the opportunities,” Cawley said.

On the Town Council side, all candidates were asked about how to best fund essential services. Burmi said with smart budgeting, Morrisville could find a way to secure more funds for services such as parks and police.

Windle said he wants to expand Morrisville’s police force and pointed to rises in crime and property damage.

“You can canvas the neighborhoods and everyone knows someone whose car was broken into,” Windle said.

Scroggins-Johnson said, in both this question and others, that more needed to be done to bring schools to Morrisville, while also giving her support for the new Wake Tech campus coming to the town. Rao said Morrisville needs to focus on more connectivity, particularly public investment in wifi.

Working Together on Council

With a Town Council of seven voting members, all candidates were asked how they would work together. Both Scroggins-Johnson and Rao said the Council has been working together better in recent years and if all sides understand where they are coming from, they can come to a determination of the best course of action.

Burmi and Windle have not deliberated with other councilmembers before. Windle said his leadership positions at Duke Health have prepared him for negotiating. But Windle also said it should not be about his personal views and was upset by councilmembers often voting the same way on issues.

“It should be about how the citizens feel, not my personal values,” Windle said.

Burmi as long as all councilmembers have their hearts in the right place, there was no inherent problem in disagreement.

“Having a debate is healthy,” Burmi said.

Cawley said the Town Council should try to stay out of the Morrisville staff’s way and let them work while not getting politics in the way. He also said he wants to make the councilmembers’ vote history accessible quickly on the town website.

“When we have a vote, I don’t just count to four and leave it there. I want us to work together,” Cawley said.

Stohlman said it is important for councilmembers to not take hard lines when working with each other and pointed to Morrisville’s work over the past four years.

“We would not have gotten anything done in the last four years if we were stuck in our positions,” Stohlman said.

The Morrisville election is on Tuesday, November 7, 2017. 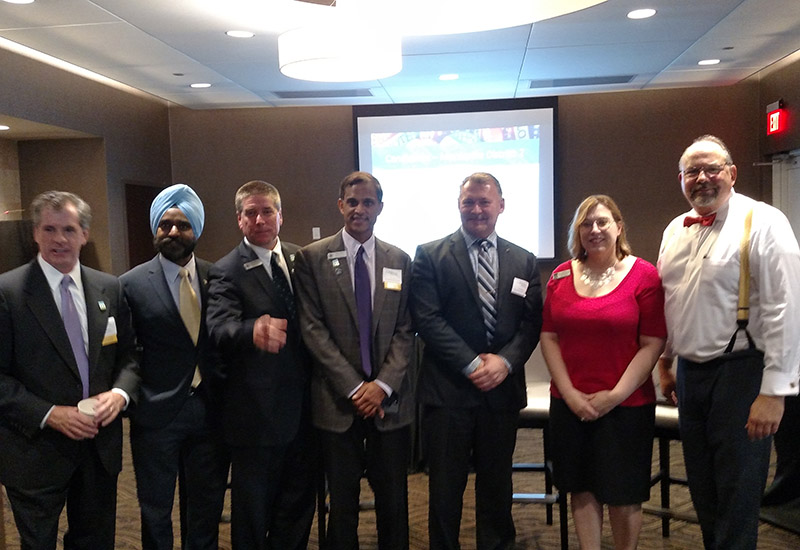 Story and photos by Michael Papich. Community coverage sponsored in part by the Morrisville Chamber of Commerce.