Cary, NC – For more than a half century, Cary Band Day has been a local tradition to recognize the hard work of high school marching bands both in Cary and across the state. This year carries that tradition forward again with dozens of schools competing and performing.

Preparing for Music and Competition

Cary Band Day’s participating schools stretch across North Carolina and even include some schools in Virginia. Included in the competition are Cary schools such as Green Hope High School and Panther Creek High School.

“It’s a great opportunity for local people to see lots of Cary bands all in one day,” said Kimberly Shorb with the Cary High Band Boosters.

For participating bands, Minick said many will already have lots of work and experience under their belts with training camps and regular practice.

“For us, we’ve already had some football games so we’re already on our way,” Minick said. 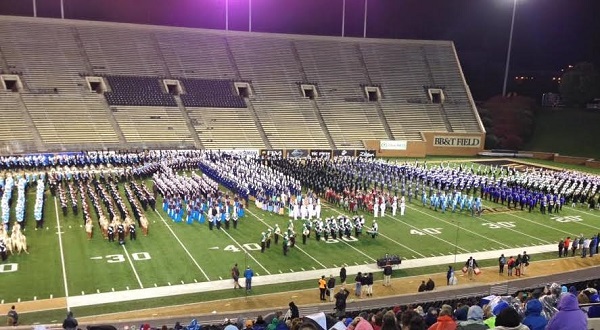 High school bands, including some from Cary, competing in Winston-Salem

With its 59th year, Cary Band Day has been a long-standing institution in Cary, as has the Cary High School band itself. Minick said the band’s reputation comes from the example set by the Town of Cary with this yearly event.

“Whatever the Town of Cary wants to do, they do it in a top-notch way,” Minick said. “The band wants to do that as well.”

Minick also said leadership and consistency plays a big part, as both he and the band members come into a program with high expectations already set. Shorb also said alumni participation helps both the band and the execution of this year’s Cary Band Day.

As someone who has worked in marching bands and music for many years, Minick said Cary Band Day, and Cary in general, creates something unique.

“This is the only place I know where the town proclaims a band day in chambers,” Minick said. “We always appreciate the town’s support.”