Cary, NC – The Carolina Hurricanes had two close calls this weekend, narrowly losing one game against the Toronto Maple Leafs on Friday and barely winning a big game against the Nashville Predators on Sunday.

Canes Comeback Comes Up Short in 5-4 Loss to Leafs

After the throttling the Canes had against the Rangers the night before Thanksgiving, Coach Bill Peters called for a Thanksgiving day practice and also worked on the powerplay early Friday morning before the game against a strong (haven’t used that description for the Leafs for a few years) Toronto Maple Leafs team.

The game wound up looking like three completely different games as each period had completely different looks and outcomes. The Leafs always draw a large crowd with last night bringing out the Leaf Nation faithful again and they left happy as the Leafs’ “second” game was the game’s turning point.

Peters pregame talk had to be laced with three key points: shoot, shoot and shoot again. While the players looked like the same players from two nights earlier, they played with a completely different look. Victor Rask, benched for the past two games, had his best period of the season as he led the Canes with three shots on net. The Canes went all out on shots in general with 14 on net, nine were blocked and eight attempts missed everything. That’s 31 total shots in a period, which is huge. The Leafs managed just eight total shots with only four requiring Cam Ward to make saves. 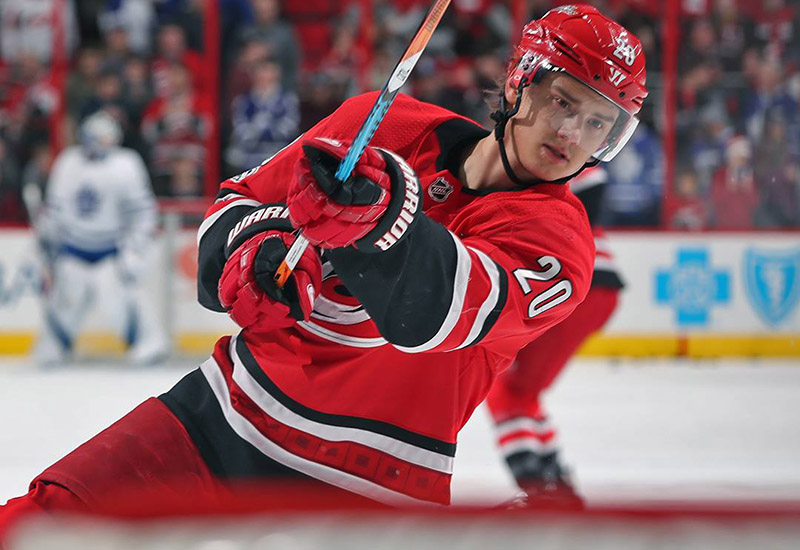 The Canes’ first powerplay was almost all it should be; only thing missing was a goal. They managed five shots on net with Frederik Andersen making key saves. Sebastian Aho, riding a five-game goal streak, almost made it six in a row on a very nice pass from Derek Ryan. Aho was on the Andersen’s right for a tip in but had his blade angled too much with the puck ricocheting high.

Mike Babcock is the highest paid coach in hockey (>$6Mil/year) for a reason and whatever he said in the locker room before the second period worked. The Leafs pelted Cam Ward from the get go. Once again, the opponents scored in the first minute of the period on what was a defensive breakdown. Zach Hyman somehow was unmarked while sitting on Ward’s doorstep and had an easy goal. The Leafs’ second goal was part skill, part speed and part surprise. The puck was cleared out of the Leafs end with Josh Leiov grabbing it in the neutral zone.

With Jeff Skinner in pursuit, Leivo turned on his jets, got inside the right faceoff circle and sent a shot high glove side into the top corner past Ward. Former Cane and good guy Ron Hainsey scored a goal that eluded Ward as there seemed to be Leafs Nation convention in front of Ward. Skinner seemed possessed on his next shift, skating hard and sent a bullet that just missed the net.

Justin Williams picked up the rebound, passing back to Skinny behind the net. Skinny sent a backhander to the crease that Derek Ryan went skate to stick sending one five hole to get the Canes on the board. Trevor van Reimsdyk’s brother James scored five minutes later to put the Leafs up by three again.  End of “Game Two.” 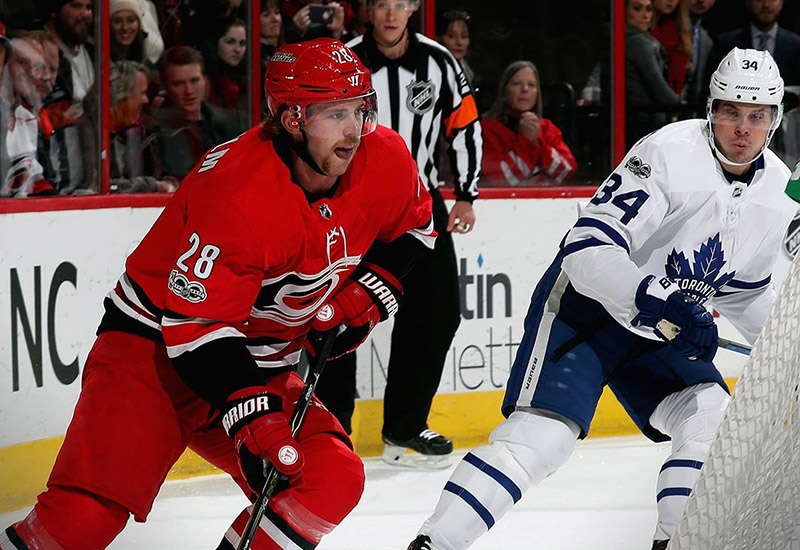 Peters must have taken a page out of Babcock’s in-between period speeches as the Canes came out like they played in the first, except Scott Darling was in the net. The Canes had almost as many shots in the period as they had connecting passes.  Early in the period, Teuvo Teravainen passed over to Justin Faulk on the right side. Faulk sent the puck to the net and was blocked in front but Jordan Staal was on the left side for the delicious rebound knocking it in for his seventh of the season.

The Canes were a different team and clearly had momentum going their way until one of the two Canadian refs called Skinny for the weakest goalie interference penalty you’ll ever see. The Leafs scored on the powerplay on another defensive breakdown.  Just like in basketball, boxing out is a basic defensive move that all coaches preach and not following what the preacher says may be a sin so there were plenty of sinners wearing red last night. Elias Lindholm is a hard worker and is not afraid to get in the dirty area and his hard work paid off.

Another hard worker, Brock McGinn stole the puck in the corner, passing up to Noah Hanifin whose shot was blocked. Lindy was fighting for position and wound up hitting in a rebound while falling to the ice. Barely over two minutes later on his next shift, after a nice passing play by Willie and Skinny, Hanifin sent a wrister in from 25 feet out that beat Andersen. Darling was pulled with a little over two minutes to play and the Canes had their chances as but just couldn’t get it in. Final number of total shots for the Canes: 91 with 47 on net. End of “Game Three.”

Very disappointing outcome but great to see a good and loud crowd.

In what to the Canes was almost a must-win game, the Canes did just that with a rare shootout win over the Nashville Predators who were just two games away from a Stanley Cup Championship last season. The Preds are coached by Peter Laviolette who was at the helm when the Canes won the Cup in 2006.

This was a great game to watch as both teams are similarly built: strong and young defense; tight checking, fast forwards and fairly balanced scoring, but the Preds have a edge over the Canes as they are strong down the middle with four solid centers on all lines, a solid goalie and Filip Forsberg and P.K. Subban are certainly elite players year after year.

The game was fast from the first drop of the puck. The Preds are the hottest team in the NHL right now and the Canes needed some type of bounce back after two losses that bookended Thanksgiving and they have to start making up lost ground before the season goes on any further. The forechecking by both teams was very evident early as it was almost impossible to see more than two passes connect by either team.

Early in the game, Trevor van Reimsdyk blocked a shot in front of Scott Darling.  Marcus Kruger snagged the loose puck and saw Josh Jooris crossing the red line two strides ahead of a defender. Kruger made a hard headman pass right on Jooris’ tape and not losing a stride went straight to the net and was able to stuff a backhander 5-hole on Juuse Saros for an early 1-0 Cane lead. Perfect start for the fourth line and helped get the Caniacs into the game early.

Within a minute later, Ryan Johansen, another impressive player, had his own breakaway on Darling but Darling made a pad save to keep the Canes up 1-0. The Canes TSA line was on the ice and as the Canes defense cleared the zone, Teuvo Teravainen made a nice pass to Sebastian Aho for what looked like a sure goal but Saros made a great save.

The TSA line was still pressing and if it wasn’t for an excellent back check by Johansen, Jordan Staal may have put the Canes up 2-0. Giving credit where it’s due, Viktor Arvidsson entered the Canes zone then completely undressed Noah Hanifin took one more stride then put a pretty shot over Darling’s left shoulder for a highlight reel goal to tie the game at 1-all. 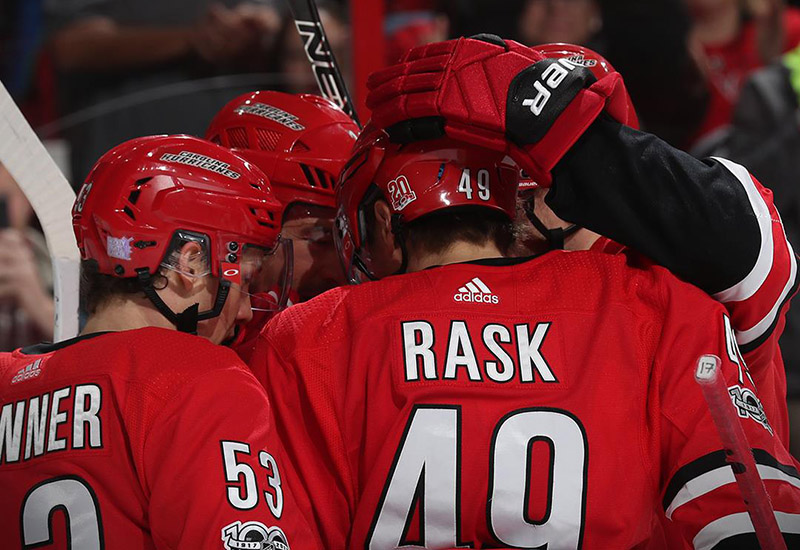 The only thing different in the second period was the teams exchanged ends: the game was still tight-checking and the Canes trademark of possession and shots for the sake of taking shots. Midway in the third with the Preds in the Canes zone, Justin Williams was called for an interference penalty. Willie has taken the approach of an on-ice coach which is great to see. He’s constantly talking to line mates and pointing out opportunities. With Willie in the box, Mattias Ekholm scored from the right point. The puck hit at least two players on the way to the net as the Preds load up in front of the goal to obscure any keepers line of sight.

The Canes responded about a minute later as Hanifin passed over to Elias Lindholm. Lindy’s shot was blocked but Victor Rask was on the doorstep and had a quick stick to slap in the rebound to tie the game. This was Rask’s second game after being benched for two games and he’s played well in both. On the next shift, Jeff Skinner, on somewhat of a goal scoring drought, had the far corner lined up but the laser hit the shaft of Saros’ stick sending the puck wide. Brock McGinn continues to play a scrappy, aggressive and effective game. Subban didn’t appreciate some of his scrappiness as, behind the play, the two of them were demonstrating how shin pads are not only for stopping pucks from leg injuries as both were swatting “what-the hey” at each other.

The Canes powerplay has been anemic so far this year as they are tied for 28th in the NHL. The Canes had an early powerplay that went nowhere but almost immediately had a second. In looking over to the bench, Coach Rod Brind’Amour barked out a few words at the first and second units. Whether it was something he said that he saw as an opportunity or just hard work, the Canes got the needed powerplay goal. Derek Ryan took a shot after getting a pass from Rask. Williams was on the corner of the crease and banged in the rebound to put the Canes up 3-2.

The Preds ties it up again at 11:15 when Craig Smith passed to Alexei Emelin in the neutral zone. Emelin enterd the Canes end taking a shot from the left side. Darling made the glove save but couldn’t hold onto the puck but was able to swipe it clear. The puck went right to Kevin Filia who saw Smith on Darlings left with Justin Faulk three feet away for the easy tip-in to tie the game.

The Canes found themselves in a hole early in the OT as Staal got called for tripping. The Preds have a very effective powerplay and Staal is one of the Canes better penalty killers. Jaccob Slavin and Brett Pesce seemed to be on the ice the entire two minutes as they were unbelievable on defense. Coach Steve Smith must have had a few pointers for both after the Ranger game and whatever was said, worked as they were fantastic. Joakim Nordstrom made two blocks that will leave marks and also played very well in the man down situation.

Right after the penalty ended, a Cane was hauled to the ice with a no-call that had the Caniacs up in arms. With just 19.2 seconds left, the makeup call was made when Ekholm bumped Skinny. Seabass and Turbo scored in the shootout while Darling snuffed both Preds’ attempts giving the Canes a much need win.

Next home game is Saturday, December 2, 2017 against the Florida Panthers. Be there!

Funding Non-Profits with Movies at the Cary Theater