Cary, NC – Hoppin’ John is a traditional Southern dish during New Year’s Eve, as if Southerns need an excuse to eat black eyed peas and rice. With the cold weather coming in, here’s a recipe for a warm Hoppin’ John soup to heat you up while celebrating the start of 2018.

With our increasingly chilly Winter weather, this is a recipe for a Hoppin’ John soup that will keep you warm.

If you want to include meat, you can include one smoked ham hock and one half-pound of ham cut into cubes.

First, soak the black eyed peas in a large bowl with three inches of cold water. Keep them soaked for eight hours or overnight and make sure you drain and rinse them well.

Heat the oil in a pot and sauté the onions, celery and garlic for about five to eight minutes; look for them becoming soft and translucent. Then, add the broth, along with the carrots, black eyed peas, thyme, bay leaves, collard greens and the ham hocks if you are including them. Heat to a boil and skim off any foam. Once it reaches a boil, reduce to a simmer and partially cover the pot for around an hour or until the vegetables and black eyed peas are tender.

Then, remove the bay leaves and the ham hocks. If you are using ham hocks, at this point, strip the meat from the bone, dice it and return it to the pot. Add in the other diced ham and heat just until it is warmed through. Now add the vinegar and salt and pepper to season. If you are not including meat, add vinegar as soon as the simmering portion is done.

The dish pairs well with cornbread and hot sauce.

To see the full story and learn about the origins of Hoppin’ John, go to FoodCary.com 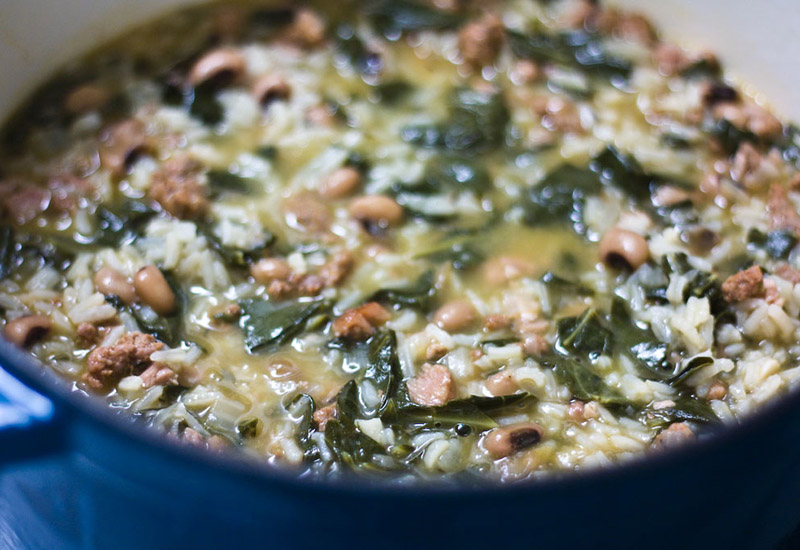