Cary, NC – This was the second consecutive holiday week and the first week of the new year.

Wednesday I attended the Cary Chamber’s breakfast where the featured speaker was economist Dr. Michael Walden from N.C. State. As usual his presentation was interesting and informative. My big takeaways were that this year the economy will continue to grow and that Cary is continuing to do very well.

Later Wednesday I talked with the Chairman of the DCHC MPO (Durham-Chapel Hill-Carrboro Metropolitan Planning Organization) who was interested in setting up a meeting with CAMPO (Capital Area Metropolitan Planning Organization) and GoTriangle. The purpose of the meeting will be to talk about CAMPO projects that may compete against DCHC and GoTriangle projects. We set a meeting date for next Thursday.

Wednesday evening I met with Mayor Pro-Tem Bush, council member Frantz, the town manager, and other staff members to talk about an issue in the downtown.

Later Wednesday I joined a couple of council members and staff members to hear concerns from a business owner.

Cold Ushers in the New Year

After a forecast of a trace of snow on Tuesday, and even as late as 4 p.m. on Wednesday, Cary saw 1.5 inches fall on Wednesday night. This hampered our snow removal efforts, but by Thursday morning all main thoroughfares had been plowed. By Thursday afternoon, all primaries within subdivisions had been plowed. We were able to plow residential streets based on garbage collection routes as early as noon on Thursday. As of Friday morning, we were still working on residential streets to support our solid waste collection efforts. In total, we have used 1,800 tons of sand/salt mix and spread 16,000 gallons of brine prior to the first flake. An incredible effort by many across the Town, in particular our folks at Public Works and those in our public safety areas.

And due to the inclement weather, we have moved our leaf collection schedule back one week. 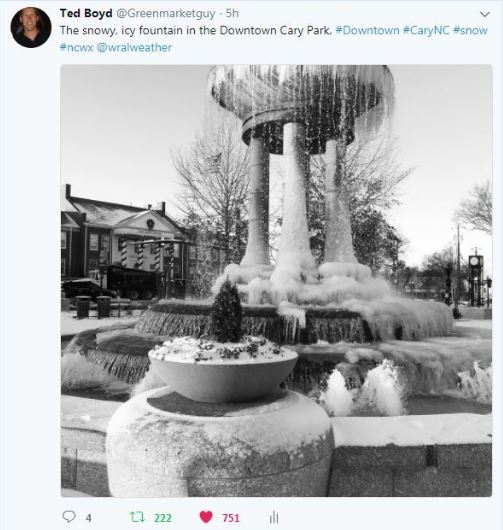 Next week, we will start a conversation with some of the citizens in the central part of Cary regarding our upcoming pressure zone shift. At this time, the modification is anticipated to occur the week of April 10. Our next opportunity to speak with these citizens will be at a public meeting February 15 at the Cary Senior Center. Please look for it to be added to your calendar in the upcoming week. If you or your constituents have questions, we’ve developed a webpage. This project is necessary to provide greater operational flexibility and efficiency, as well as prepare to bring into service the Good Hope Church Road Water Storage Tank in 2019

Morrisville Parkway Extension and Interchange project hit an important milestone last week with bids received that are in line with the engineer’s estimate and within budget! This is particularly good news since Morrisville Parkway is one of our biggest transportation investments with significance to the town and the region. It is also particularly good news as we may have turned the corner on the recent trend of escalating costs on bids. Morrisville Parkway will provide the Town with another interchange on NC540 and, along with one other interchange, will include connected vehicle technology for an NCDOT evaluation of the impacts of this new technology. Cary has been the lead agency through the right-of-way and utility relocation phases. As we move into the construction phase, NCDOT will be taking the lead. NCDOT anticipates the project being open to traffic in time for Christmas of 2019.

First Walk of the New Year

Members of the Greenway Committee, Cary Teen Council and citizens kicked off the new year with a First Walk on January 1. The group of 35 braved the cold temperatures to hike the Black Creek Greenway from North Cary Park to Reedy Creek Trailhead.

At the end of December, the newly installed and highly anticipated traffic signal at O’Kelly Chapel Road and Yates Store Road was put into full operation. This traffic signal was installed by NCDOT’s contractor through an agreement between NCDOT and a private development which helped to advance the installation of the signal to better assist school traffic. As part of the installation, the signal is connected to the Town’s Advanced Traffic Management System and can be monitored and operated from our Traffic Management Center in Town Hall. A CCTV camera will be installed in the near future to better assist staff with signal timing adjustments and aid in safety for pedestrians and students.

It’s a pleasure to announce that CAMPO’s LAPP program is set to award $6.3 million to fund four Cary transportation projects. The LAPP grants still need final approval by CAMPO’s Executive Board at their January 17 meeting. The following street, transit, and greenway projects are recommended for funding:

For those of you who don’t follow Ted on Twitter (and if you don’t, you should!), we wanted to share his photo that went viral in a “Twitter Moment.” As of Thursday afternoon, his photo had over 154,138 impressions, 751 likes and 221 retweets.

Next week will be a typical busy week for me. It includes staff meetings, a meeting with special interests, a regularly scheduled council meeting, a meeting with DCHC, CAMPO, and GoTriangle, and a work session with Board and Commission chairs.

Well, that is all for this week. My next post will be on Sunday, January 14th.  Although I have Facebook and Twitter accounts those are not the best means of communications with me. Please send all Town of Cary questions or comments to Harold.Weinbrecht@townofcary.org and email personal comments to augustanat@mindspring.com.

From the blog of Cary Mayor Harold Weinbrecht. Photos courtesy of Ted Boyd and Michael Papich.