Cary, NC – At our council meeting this past Thursday we unanimously approved the Urban Drive Townhome Rezoning. This request rezones one lot along Urban Drive from Medium Density Residential (MDR) to Mixed-use allowing for the construction of five townhomes that will be integrated into the Chatham Walk Condominium project at the corner of Chatham and Urban.

The Chatham Walk condominium project did not require council consideration as the use is already allowed under the existing zoning which was put in place in 2001 with the adoption of the Town Center Area Plan (TCAP). The Chatham Walk Condominiums would still be built whether or not we approved the townhomes.

So while we technically weren’t considering the condominium project, we were considering a component of it – separating the two was difficult as the proposed townhome layout relies on the condominium site for access, parking and stormwater management. 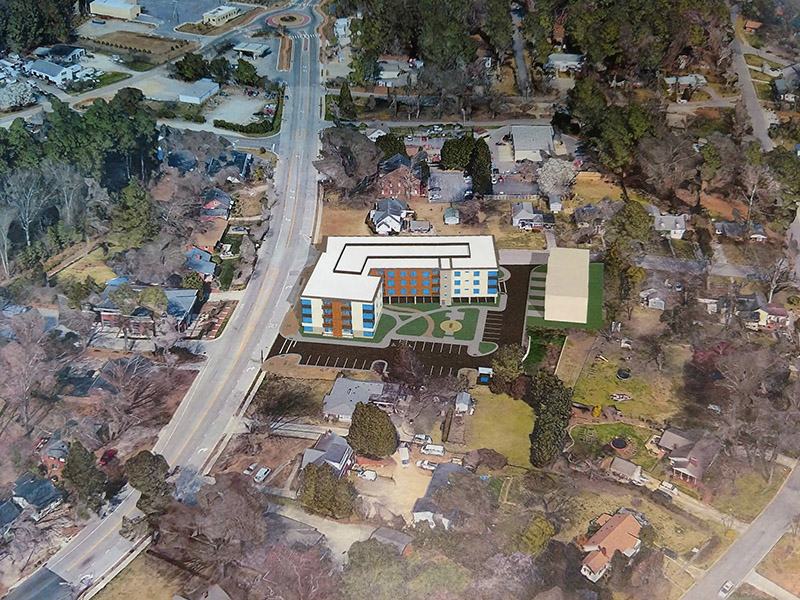 The image above was generated to demonstrate scale and transition. That is NOT what the townhomes will look like 😉

Downtown residents expressed both support and opposition to the proposal with the majority of residents along Urban Drive in opposition. Concerns included building height, neighborhood character, transition, building set-backs and stormwater/flooding.

Zoning conditions offered by the applicant in an effort to address neighbor and council concerns included:

1) Stormwater runoff from the roof and driveways of any townhome building constructed upon the property shall be diverted to the existing stormwater system within Chatham Street.

While this clearly won’t in any way solve the stormwater problem downtown, it won’t make it worse either and may actually help a bit as runoff post-development will be mitigated vs no stormwater mitigation pre-development. Cary’s stormwater requirements now are MUCH stricter than in years past.

2) The applicant has also offered conditions related to building design and architecture. These include locating the principal entrance on Urban Drive for any townhomes with frontage on Urban Drive, providing a minimum percentage of masonry material on building facades, and limiting the use of vinyl siding to soffits and architectural accents. The intent of these conditions is to provide an architectural transition between the existing single-family homes and condos and respect the residential front door feel of the neighborhood.

3) Conditions were also offered to provide a six-foot tall fence or wall within ten feet of the boundary line and a ten-foot building setback from the southern property line (the same set-back requirement that exists with MDR).

The townhomes will be three stories tall with a maximum height of 45 feet – the same height that could have been built by-right under the existing MDR zoning. That deserves repeating – a 45 feet tall residential building could have been built on this site today without any council consideration or citizen input. The primary difference between the existing zoning and that requested is the number of units and access/parking.

And while I appreciate the resident’s concerns regarding transition, we will have to agree to disagree. I believe that three-story townhomes do provide a good transition from a four-story condominium building into a single-family neighborhood downtown. The Cary Community Plan – our community’s vision document speaks to this – “Heights should step down to adjacent lower story buildings where necessary, or otherwise provide acceptable transitions.”

The townhomes will also better shield the condominium’s parking lot from view along Urban Drive.

Another concern raised by area residents was “development creep” – that by approving this proposal we are opening the door for the rest of the neighborhood to be redeveloped with townhomes or other high density uses.

That is not the case.

While some parts of our downtown neighborhoods may see change over the coming years – especially those areas close to Chatham Street, Academy Street and Harrison Ave – the majority of downtown neighborhoods are planned to stay the same – except of course for remodels, additions or other improvements performed by homeowners – which is happening a lot these days!

The vision for the Central Chatham Sub-area as described in the Cary Community Plan is, “A vibrant mixed-use corridor with shops, restaurants, breweries, studios, and sidewalk vendors. The street will be a corridor, where people move between adjacent subareas. It will be Cary’s primary destination for dining, entertainment, and shopping. And it will be a neighborhood, a downtown community with a variety of living options where residents can obtain their daily needs within a short walk.”

Here is an image of all the downtown sub-areas as well as the Central Chatham Sub-area where the site is located. 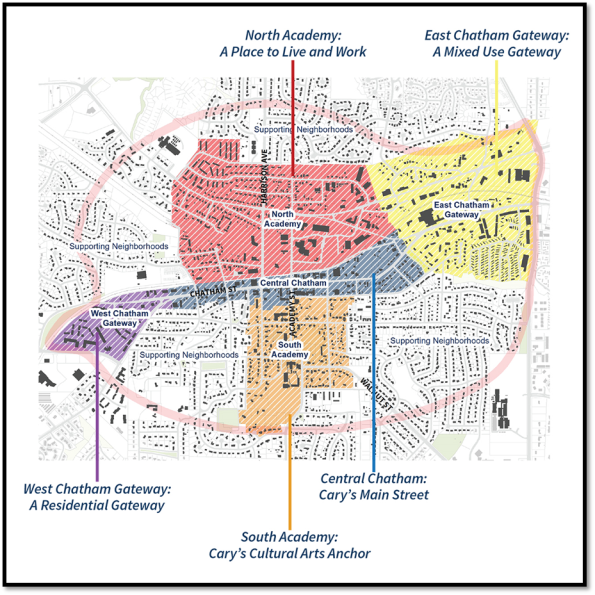 From the Cary Community Plan – “The shaded areas on this map highlight some of the general locations that might offer particular opportunities for future infill development, redevelopment, or re-use that could help to achieve the vision for Central Chatham. Change is anticipated to occur slowly over time, as individual property owners elect at their own discretion to undertake changes to their properties to better align with this vision. Additional sites not highlighted in this subarea are expected to be maintained as is, or not change significantly, over the planning horizon.”

So the bottom line is that if your neighborhood isn’t highlighted, it isn’t expected to change much nor do we plan for it to. If it is highlighted, change might occur if property owners choose to do so.

I appreciate that change can be difficult for folks, I really do. But change is coming to downtown and for the most part this is a great thing. The condominium and townhomes above might look out of place today. They won’t look out of place in 5-10 years. A similar project is already in the works on the eastern corner of Urban and Chatham and the land on the northern side of Chatham St. has been assembled for redevelopment. A number of other projects are also in the works downtown such as the townhomes along Park St across from the downtown park, the mixed-use development at the corner of Harrison and Chatham and private development at the downtown library parking deck.

As new development occurs, we will continue to work to ensure that it is done in a manner that is consistent with our community’s vision for downtown and respects the character and charm of surrounding neighborhoods.

I can’t say that I ever thought I’d dedicate an entire blog post to five townhomes, but the reality is that this case was much bigger than that. It was about striking a balance between existing residents and new development and sticking to the vision laid out in the Cary Community Plan. As downtown continues to evolve we will surely face similar challenges. I look forward to it.

Potential for More Snow on Wednesday