Cary, NC – Fresh off the All-Star break and the start of a season-long, eight-game home stand, the Carolina Hurricanes beat a hurting Ottawa Senators team 2-1 before a home crowd that had one of the first major favors by the new owner.

Everyone in the mezzanine was given the opportunity to sit in the lower bowl or 200 level. I’d say 99 percent of the folks took advantage of the better seats with just a few remaining in the upper deck.  Sort of brought back memories of Greensboro when the upper deck had the black curtain their second year there.

Karlsson Worth the Price of Admission

Both teams had just one player go to the All-Star game: Noah Hanifin for the Canes and Erik Karlsson for Ottawa. Karlsson is easily among the top five players in the NHL and is a defenseman who consistently leads his team in scoring. Certainly a throwback to the Dennis Potvin and Bobby Orr years of elite scoring D-men. I found myself just watching Karlsson as he is an amazing player – smooth as silk on skates, jumps up front better than most forwards and anticipates plays, which has to be something with the water in Sweden where he grew up as all Swedes seem to have great ice sense. He is a clean player, never taking a dirty shot or attempting to injure, but is still ruthless on defense and rarely gets beat. You have to scratch your head as to why the Canes didn’t take him back in the 2008 draft when they had the opportunity.

The first period saw very few scoring opportunities, which isn’t surprising as both teams are well below the NHL average in scoring. The Sens had the first decent chance with a two-on-one with Jaccob Slavin the lone defenseman but Slavs threw his body down at the perfect time to block the pass and thwart off any shot on Cam Ward. The Staal family’s nemesis (and most families for that matter) Dion Phaneuf had one of the Sens better shots but Wardo made the save look easy. Craig Anderson, in goal for Ottawa, is not having his typical good season but was playing solid but wasn’t challenged hard early in the contest.

Both teams hit the pipes a total of four times in the first but a goalie will always say he knew it wasn’t going in. The Canes best chance was a Jeff Skinner shot off a rebound that Skinny backhanded from an impossible angle that bounced off the crossbar on what could have been used as a film example of quick hands. 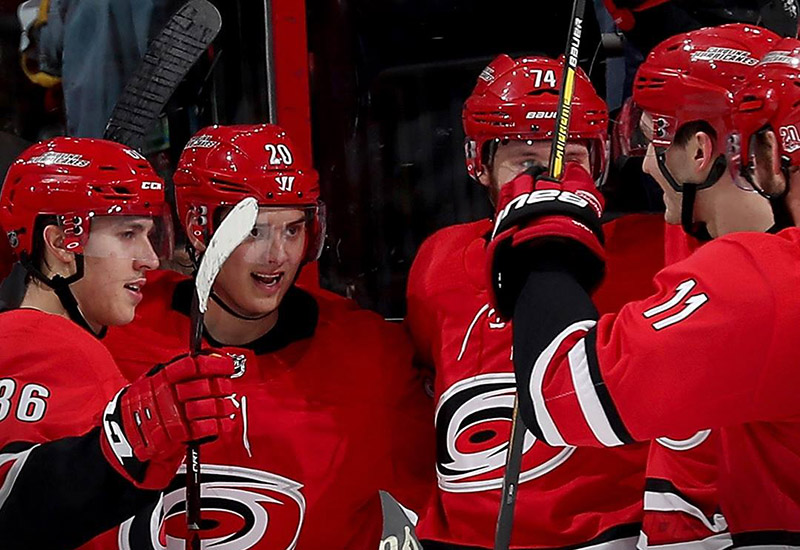 The second period was a mirror image of the first. Whenever challenged, both goalies came up big. Slavin once again stopped what could have been a sure goal or at least a point-blank shot when Zack Smith had the puck to Ward’s left with a teammate out front reading a book. Slavs went to cover Smith, anticipating the pass he dropped to a knee with the pass hitting his chest. Ward may be buying Slavin dinner at Rey’s with the defensive game he was having.

Victor Rask, another Swede with excellent ice sense, went hard to the net with 11 seconds left in the period just as Justin Faulk was sending a shot through traffic. Somehow, Anderson made the save with both Rask and Justin Williams were in the dirty area of the crease. It’s not that the shot totals were low, but credit the forechecking by both teams to keep the shots from being serious scoring opportunities. Both keepers usually had clear vision for most shots with very few shots on jams or second tries.  The one goal in the second was by the Sens late, of course the initial set up was by Karlsson. Jean-Gabriel Pageau sent a shot from the left point that may have ever-so-slightly hit a skate to change direction that went in under Wardo’s arm.

The Canes came out in the third as the more aggressive team. The line on the first shift set the tone with constant movement and great offensive zone forechecking. Just as the Sens appeared to clear the zone, Derek Ryan made an excellent back check to steal the puck and keep it live. With the Canes changing lines, Sebastian Aho, back after missing four games with a concussion and knee injury, crossed the blue line and cocked his stick that seemed to hang up for three seconds then let rip a slap shot that got the Canes on the board. Teuvo Teravainen passed to Aho then camped out in front. It appeared to me Teravainen tipped the puck but the official scorer but the goal was counted at Aho’s.

Midway in the period, Hanifin joined the rush along the far boards. As he was carrying the puck, Zack Smith went low and tripped Hanifin but Hanifin, being the agile skater he is, quickly got up and kept the puck moving as Ward went off for the sixth skater.

After Ottawa touched the puck, the Canes went on just their second powerplay of the night. Williams brought the puck in the Sens zone on the right wing. Rask was on the left, got the puck then with a clear lane sent a slap shot short side that Anderson would have liked a second chance. My initial thought was Rask was offside and Ottawa coach Guy Boucher was immediately looking at the reply on their bench tablet, and to my pleasant surprise, after fiddling around at center ice, the ref dropped the puck ceasing any challenge.

Coaches Bill Peters, Rod Brind’Amour and Steve Smith must have had several “save the lead” practices as the Canes did an outstanding job of negating any real threats, possibly except for the shot on Ward with three seconds to go. A victory is a victory, which the Canes need badly to stay in the playoff race.

Anyone’s guess if the Canes will have other game day deals like sitting down low with an upper deck seat.  You won’t know until you go. The offer of $97 for all February games is unreal. Next game is Thursday, February 1, 2018 against the Canadiens. Be There! 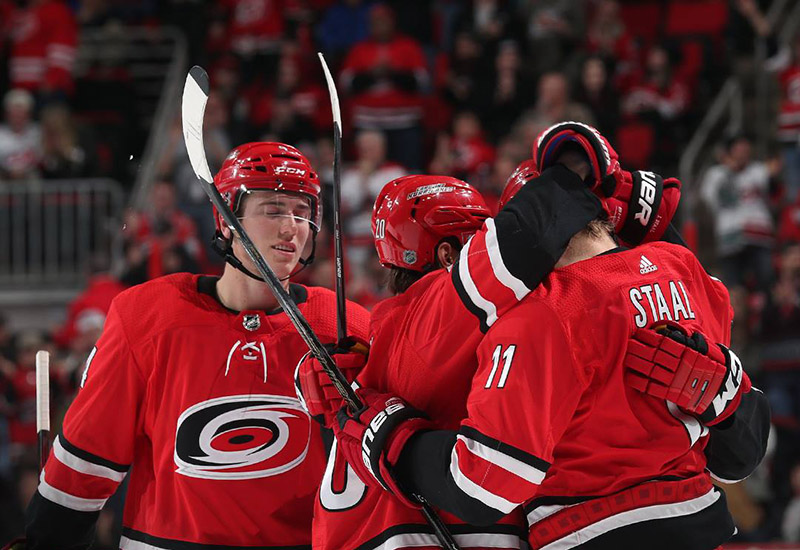