Cary, NC – While many sports fans were preparing for the big game Sunday night, the Carolina Hurricanes were putting in hard work with two home games this weekend, but unfortunately fell short in both matches.

Canes Can’t Keep Up with Detroit in 4-1 Loss

The Carolina Hurricanes played the night before while the Detroit Red Wings rested in Raleigh and the Canes looked every bit the team that was more tired. For the most part, Detroit is the faster team. Taking the best from these two teams would make an extremely strong team. The Canes have a great young defensive corps that has speed and a little sandpaper every now and then. The Red Wings are very fast up front with most of the young talent leading the team in scoring. It’s not only Detroit’s youth, what team wouldn’t want Henrik Zetterberg who has played well over 100 NHL games and is still very productive on the ice.

Based on Detroit’s lineup, they staffed for a low penalty game possibly knowing the Canes are a low penalty team and not a real physical threat. Despite the intent, the Canes got the first powerplay early in the contest when their best young player, Dylan Larkin, hooked Teuvo Teravanien deep in the Red Wings end. Getting Larkin off the ice is like a double bonus as he is an excellent penalty killer.

The Canes did a good job passing around the umbrella getting off a couple of shots. After Detroit made a clear late in the main advantage, the Canes regrouped for one last rush. Justin Faulk had the puck inside the blue line with Elias Lindholm camping out in front of Petr Mrazek. Lindy has been doing a great job in the dirty area all season and actually seems to enjoy the physicality that goes with the turf. Faulk saw Lindy doing his thing then sent a bomb to the net. The puck appeared to graze Lindy ever so slightly then hit Mrazek. But rather than knocking the puck to the ice, the puck flipped up and over Mrazek and was headed into the goal with Sebastian Aho extending his long stick to touch the puck right under the cross bar to ensure the puck crossed the line for an early, and only, Cane lead. Late in the period, Danny DeKeyser tied the game and from that goal on it was all Detroit. 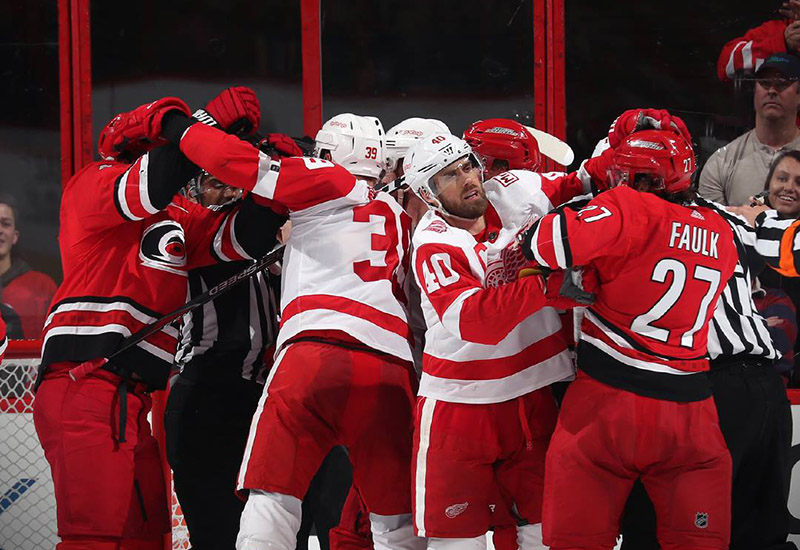 The Red Wings added another goal in the second. Trevor Daley scored from the left point and while there was traffic in front of Darling, the puck hit the back of the net with Darling not having a clue the goal went in. The defense wasn’t doing a good enough job clearing the dirty area which wasn’t helping Darling see the lanes. The second period showed just how fast the Red Wings were or how tired the Canes were as the Canes were constantly a stride behind nearly any Red Wing.

Not that anyone was counting on this game as a win during this long homestand, but for only the second time in forever, the Red Wings will not make the playoffs so this was a key opportunity to get the two points and be in the wild card position after the game as Philadelphia was idle.

The Red Wings added two more goals in the third and both were backbreakers. The first was when  Zetterberg stole the puck and passed to Gustav Nyquist in the mid slot. Nyquist made a quick snap wrister high glove side past Darling. Darling must have thought the shot was going to go low as his glove was in a fingers down position leaving the top corner wide open. The last goal was right after the Canes finished a powerplay.

Seabass had the puck in the high slot inside the blue line, with just seconds remaining in the powerplay let go a slapshot but the puck hit Luke Glendening’s shin and bounced up to center ice just as Darren Helm was coming out of the sin bin. Helm used  his speed, went right for the goal and sent a hard slap shot along the ice from about 20 feet out to the back of the net before Darling could move.

Darling had good moments and some weak moments, not doing anything to get coach Bill Peters’ confidence that he deserves more starts. Interesting statistic was only Jaccob Slavin and Brett Pesce on defense and the line of Victor Rask, Justin Williams and Brock McGinn were the only Cane players not on the ice when Detroit scored.

The Carolina Hurricanes lost a crucial game Super Bowl Sunday afternoon: 3-1 to the San Jose Sharks when every game at this junction of the season can mean making the playoffs or early golf season. Again. 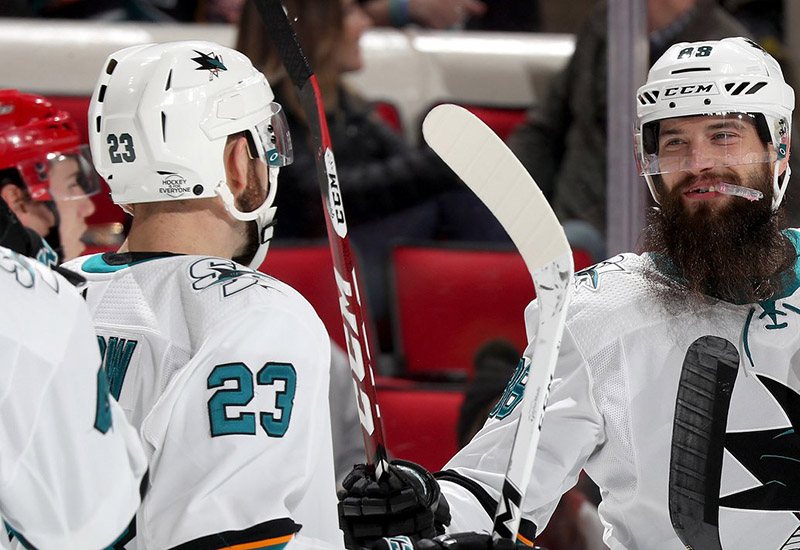 The Canes lead the NHL in faceoffs, but while losing the opening faceoff, they gained possession and started attacking back-up goalie Aaron Dell. Dell is almost in a position of where Darling was last year as he’s having a killer year as a back-up and has to be catching the eye of some teams. Unlike Darling, he’s still on his entry level contract so unless the Sharks’ management gets an offer to good to refuse, he’s staying put in San Jose.

Sebastian Aho had possession in the Sharks’ end and skated around the whole perimeter of the offensive zone before setting up a nice play to Teuvo Teravainen at the far side of the net. Teravainen had a quick shot that went too high, otherwise if it goes in it’s on the NHL highlights of the week. The Sharks then cleared the puck taking possession in the Canes end. Timo Meyer crossed the blue line passing over to Brent Burns, the toothless man with a beard and the only player in the NHL with a man-bun, along the far boards. Burns passed down to the corner to Joonas Donskoi who drew two Canes defenders. Meyer was left alone and cut to the center slot, taking a pass from Donskoi and had time to pick any corner in the net for the 1-0 lead.

Very late in the period, the Canes TSA line was on the ice and did the dump and chase. Aho was the up front chaser forcing the Sharks to make a clear. Jordan Staal intercepted the clear touching the puck back to Aho who wasted no time sending a one-timer past Dell to tie the game. By the way the Canes were skating, going into the locker room with a 1-1 tie would have been a moral victory and time to re-evaluate the game plan. However less than 90 seconds after the Aho goal, the Sharks had the puck along the near boards with four Canes players digging for the puck against two Sharks.

Mekre Karlsson got the puck over to Chris Tierney who had enough time to read a couple of books in front of Cam Ward. Tierney settled the puck sending a backhander past Ward for the late score, giving the Sharks a 2-1 lead they would not relinquish. 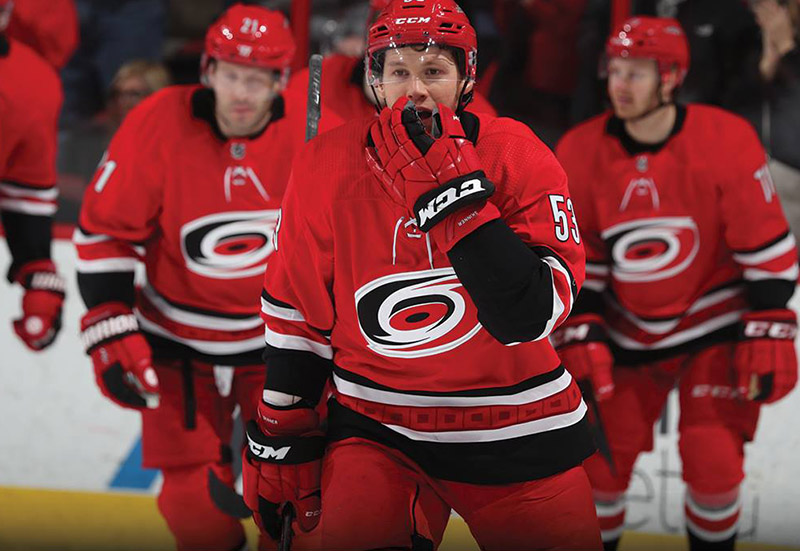 Ward Left Out To Dry

The Canes did what they absolutely couldn’t afford to do and that was they came out flat in the second. The Sharks were on the last seconds before a line change with Joel Ward passing to Burns on the right point. Burns flung the puck towards the net to allow for the line change but with Barclay Goodrow and Brett Pesce fighting for position in the crease, Wardo’s sight lane was blocked and the puck got past Wardo for the 3-1 lead. Maybe Ward could have been tighter on the post but allowing Burns the free fling towards the net was a letdown by the forwards.

Later in the period, Joel Ward received a pass right in front of Cam Ward with Wardo flopping to the ice, right arm and stick stretched out making a save on Joel Ward’s shot with his back on the ice. For the second game in a row, the Canes forechecking was for the most part missing. The Sharks are a good team but were certainly beatable.

This was the second game in a row the Canes coaching staff would not be happy with and will probably make changes for the very important game Tuesday, February 6, 2018 against Philadelphia. The Flyers usually draw a decent size crowd and Flyer fans are typical Philly fans, so with the recent Super Bowl win by the Eagles, it could be an interesting night. Be there!

How Cary Negotiates for Amazon HQ2