Cary, NC – It took just 14 seconds for the Carolina Hurricanes to score a five-on-five goal in what seemed like forever when Brett Pesce put in his second of the season establishing a new record for the fastest goal in the franchise by a defenseman. With back to back games this weekend, coach Bill Peters selected Scott Darling to be in the net with the Canucks at this point of the season, are the weaker of the two teams plus the Canucks best player got hurt the night before in Tampa Bay. 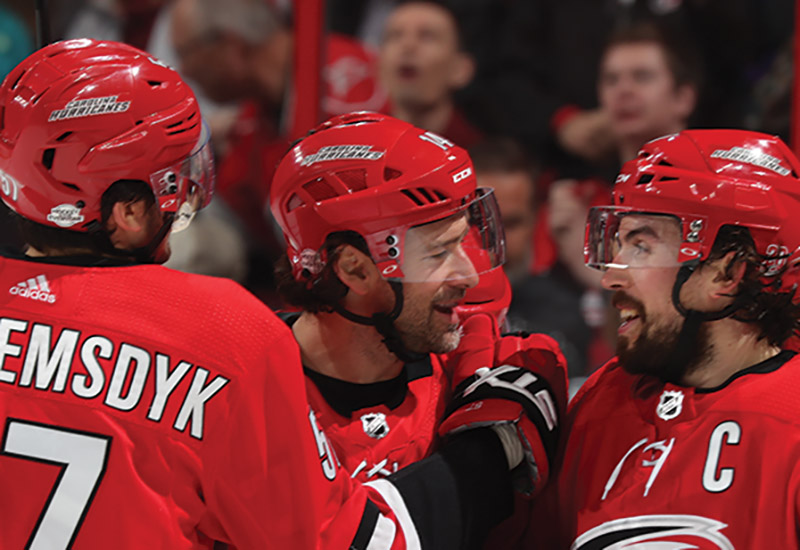 Anything to get Darling confidence is what the Canes need if they have any chance to make the playoffs. With the win and early scoreboard watching, it was looking as if the Canes would leap frog a couple of teams and be above the line for the playoffs but the Islanders won their game on OT that turned out to be a wild game in Brooklyn.

Pesce Gets Fastest Goal By A Defenseman

The Canes lost the opening faceoff but the forechecking of the TSA line forced the turnover in the Canucks end. Sebastian Aho, with his long stick, stole the puck in the offensive zone passing up to Jordan Staal on the near boards. Staal had his head up, looking for a friendly stick to pass to and saw Pesce crossing the blue line with speed. Pesce settled the puck, saw Teuvo Teravainen camping out in front of the crease and let a hard wrister go that kissed the inside of the right post going in to score his second of the season.

The Canes kept the pressure on frustrating the Canucks in all three zones with their best forechecking is five games and the defense, playing strong in front of Darling. Maybe with a bit of prejudice, former Cane Brett Sutter was the Canucks’ best player on the ice with several good shots on goal and two very good defensive plays.

Later in the period, the Canes were again pressing in the O-zone. Word had to be from the coaches to “throw anything at the net” and see what happens. Elias Lindholm had the puck along the goal line on the far side with no one to pass to so he flung it at the net. Jacob Markstrom, who shut out the Canes earlier in the year, kicked the puck with authority but Noah Hanifin picked up the rebound, passed it down back to Lindy who saw Phillip Di Giueseppe fighting for position on the goal corner, made the pass with Di Giueseppe swatting the puck inches off the ice into the back side of Markstrom’s pads into the net for his first of the year. Late in the period, Seabass netted his 20th of the season with assists going to Pesce and Jaccob Slavin. 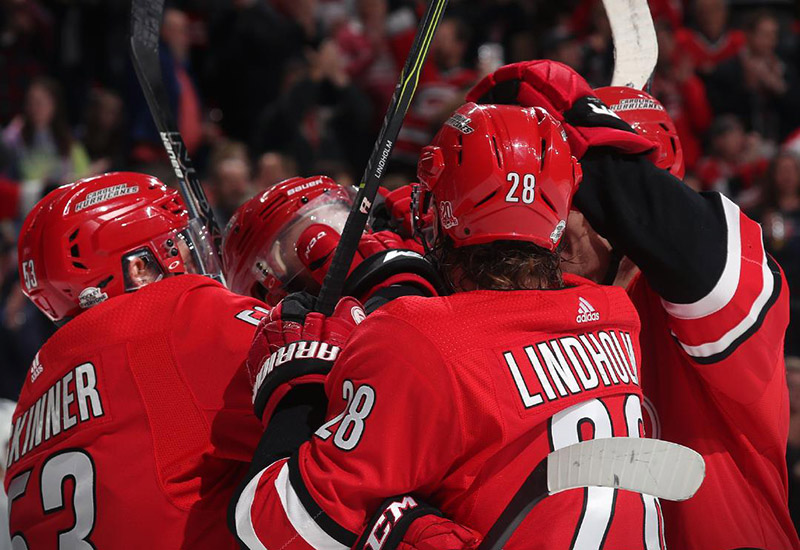 Vancouver came out in the second like the Canes did in the first: very aggressive, excellent forechecking, solid goal tending and unlike the Canes, finished their checks along the boards. Michael Del Zotto got the Canucks on the board on a well-earned goal that was a result of the constant pressure and fast passing early in the period. Moments after that goal, Darling made an impressive save off Sutter’s tip in attempt giving the Caniacs some confidence back that Darling’s problems may be behind him.

Jeff Skinner has made some impressive improvements with his defensive play this year and he used those skills stealing a puck in the neutral zone then gave Justin Williams a little chip pass across the blue line. Willie snared the puck as used the defenseman as a shield letting go a hard wrister to go in the upper corner stick side to close the scoring. Great win for Darling and any win for Darling is great news for the Canes as they chase the playoff spot.

The Canes made it two-for-two with a 3-1 win over the Colorado Avalanche in front of a great and lively crowd. The Avs are one of the surprises in the NHL this year as they were the worst team in the NHL last year and weren’t expected to have a better year let alone be in a playoff hunt position. The game’s energy was great from the drop of the first puck as both teams needed the two points on the line. Well over 15,000 were in attendance and the Caniacs gave one of the loudest cheers of the season when Cam Ward was introduced as the starting goalie as his play this year has been nothings short of amazing.

The Canes looked like they were going to have another quick goal two nights in a row when after a feed by Teuvo Teravainen, Seabstian Aho was robbed by Semyon Varlamov with just 11 seconds gone in the contest. The pace of the game was fast was very exciting as little play was in the neutral zone with rarely more than one shot taken before play was going the other way.  Late in the period Justin Faulk was clearing the Canes end when he was pick pocketed in open ice by J.T. Compher. Mikko Rantanen took the puck along the back boards, eluding a charging Faulk then out muscled Jordan Staal while shoving the puck to Tyson Barrie who turned the corner from behind the net a ripped a shot high glove side past Ward.

The Canes answered quickly as the grit and grind line was out with Elias Lindholm doing most of the grinding behind the net.  Lindy used his strength to win a the puck flipping it to a wide open Brock McGinn eight feet off the right post. Ginner wasted no time sending a hard wrister low and far side to time the game 18 seconds after the Avs goal. 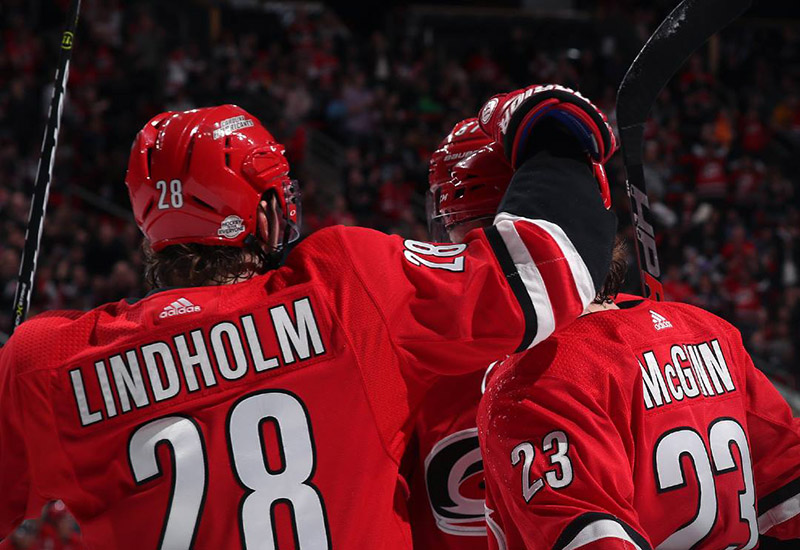 Cam Ward put on a clinic of impressive saves in the second period. Not taking anything away from Varlamov as he shut down the Canes in the second, but Wardo was playing like he his in the spring of 2006. At one point he made two unbelievable saves and a quick look at the bench saw Darling applauding with a wide grin on his face. Both players are vying for games but the respect each has for the other is a great lesson for sportsmanship and what it means to be a teammate.

The third period saw the Canes come out the stronger and faster team. The Avs are a very big team with seven forwards topping 200 pounds and clearly using that size advantage when checking the Canes along the boards.

Ginner and Lindy teamed up for for an identical goal just 35 seconds into the third. Lindy fought for the puck behind the goal, found Ginner camped out 10 feet off the right post and again sent a shot far side for the 2-1 lead and his 10th of the season.

Later in the period, Seabass made a nice feed to Lee Stempinack  in the slot. Stemper deeked around one defender sending a hard back hander to the goal. Varlamov made a chest save buy Skinny was in the Chad LaRose position to the side of the goal and chipped in the rebound for his 16th of the season and hopefully a spark to get his late season scoring streak going. Great crowd who was loud all night and the Canes responded with a great overall game.

Next, and last game of the season long home stand is Tuesday, February 13, 2018 against the L. A. Kings. Be there!

2018 Guide to Valentine’s Day in Cary