Cary, NC – A Michelle Malone concert is a two-way exchange, with energy from the audience gathering on stage and rushing out through Malone’s intense music. Cary residents can experience that rush of energy as Malone performs at the Cary Theater next week.

Malone, performing at the Cary Theater on Friday, March 9, 2018 in a show presented by Six String, said she prefers the close, intimate setting the venue provides because audience connections are so important to her performances.

“I talk to them and get their energy. The energy swirls around me like a tornado and if I’m into it, they’re into,” Malone said. “Sometimes I go out before I play and get vibes from the audiences. It opens a rapport and then when I play, it’s like hanging out with a friend rather than a tense work relationship.”

As an acoustic singer-songwriter, Malone’s music can be very loud and intense with more delicate moments as well. For Malone, she said finding what direction to go next comes from asking the audience what they want to hear as well as instinct from extensive touring and performing.

“It’s related to a particular song and the pace of the set,” Malone said. “I have a good feel for what needs to happen next.”

The March 9 concert comes one week after Malone releases her new album “Slings and Arrows,” which is being self-released.

On this new album, Malone said there is an overall message of getting up after being knocked down. Many messages can be found throughout Malone’s catalog but she said her first task with any concert is to give people an escape rather than to get a point across.

“First and foremost, my job is to entertain,” she said. “I don’t get on a soapbox on stage.”

If there is any reason behind putting messages into her songs, Malone said, it is to communicate her feelings to herself.

“Often, I’m writing songs for me. I need that medicine to keep on going,” she said.

Malone performs at the Cary Theater at 8 PM on Friday, March 9, 2018, presented by Six String. 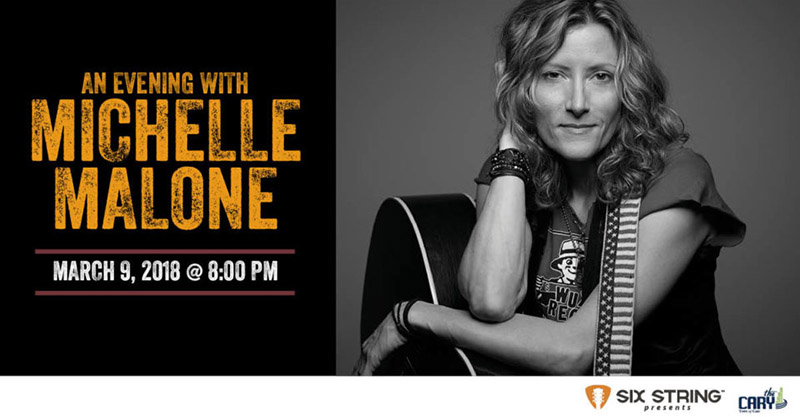 Cary, Triangle Rank in Top 10 of Places to Live Nationwide