Cary, NC – This was a slower than average week for me.

Monday started with my weekly town manager one-on-one meeting. We talked about a variety of topics including having an additional neighborhood meeting to hear concerns from the residents near the Penny Road Kildaire Farm Road gas station proposal. We also talked about an issue with some faulty town’s water meters in town. The cost and replacement of those meters will be covered by the manufacturer. The Green Level Church Road widening was also discussed. NCDOT would like to do the entire set of improvements rather than the ones they have planned. So we will probably enter this as a LAPP (locally administered project program) project. Other topics included the upcoming Cary/Morrisville joint meeting, an update Fenton development agreement process, the Glenaire rezoning proposal, and the approved gas station near Weldon Ridge School sites which is upsetting citizens.

Later I attended the Real Health Experience: Make Fit Happen seminar held at the Cary Arts Center by Dr. Livingood. He and I briefly talked about fitness in the community before the audience.

Arguments for the connection seem to be championed by developers who have said that Morrisville’s ability to create a downtown would be ruined without the connection. In addition, some council members have stated that they are concerned about 911 response times and the connection would help that issue. It is likely the Morrisville council will vote whether or not to put a connection on their transportation plan in the next few months. The good news for those that oppose is that this connection would not score well for state and federal funds and would likely have to be funded by Morrisville. That would include bridging over a sensitive wetland area. So unless there are drastic changes I don’t see the connection in my lifetime. However, that doesn’t mean people won’t suffer if it remains on the plan. We will see how this continues to play out in the coming months. It may turn out to be a campaign issue in the Morrisville municipal elections next year as opposition gets more organized.

Our second topic was the first quarterly update presented by the new Vice President of Economic Development, Evan Stone. First he spent time talking to us about his background and his strategy in his new role. This includes visiting current businesses to see if they are happy and if they would be willing to help in our recruitment of other businesses. In his update he mentioned that 78% of companies in our area will be adding jobs in the next three years. He believes this equates to about 35,000 jobs. He spent time talking about the talent pool and the problems some employers are having with millennials not having the necessary soft skills. As a result some companies will be looking at mentoring programs. Our meeting concluded in less than an hour.

Sunday I attend the Basant Bahar celebrations at the Cary Arts Center. It is a celebration of the advent of spring and is one of the signature events that Hum Sub brings to the Triangle. Basant Bahar showcases the best of Indian culture with music and dance that has stood the test of time, holding its own against the buffeting winds of change. We were all treated to extraordinary performances from all age groups. 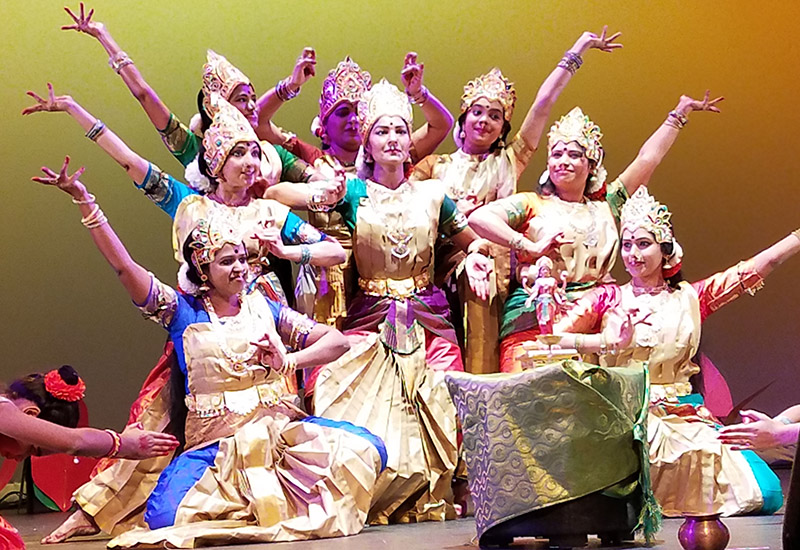 This week it was announced that Cary was among the five national award winners for the 2018 Readiness Challenge Grants for Smart Cities.  “The five winners had three important things in common,” explained Smart Cities Council Chairman Jesse Berst, “including a focus on uncovering synergies and cost-efficiencies between departments. They also fostered coordinated collaboration between internal departments, external stakeholders and nearby regions. Finally, they exhibited a determination to include underserved and vulnerable populations.” The judges were impressed by Cary’s efforts on smart parking, mobility and street lighting, as well as the city’s efforts to create “Destination Centers” in underserved neighborhoods to encourage jobs and housing.

Cary will use the Council’s Readiness Workshop to further advance several of its projects, including “One Cary.” This initiative seeks to gain a 360-degree view of the city by creating a single core platform to promote data sharing between departments and with citizens. Congratulations to all those involved in helping Cary get this grant.

Mark Jones, a Bloomberg Philanthropy project facilitator, conducted a workshop on Monday and Tuesday of this week with the core project team and Mayor Pro Tem Bush to help focus and strengthen our project concepts and assumptions associated with measuring opioids in small, geo-localized areas. Much of the discussion centered around the processes necessary to ensure the creation of a repeatable and reliable testing protocol and then the development of sharable, actionable and useful dataset for our public health partners. Another workshop will take place in New York City with the other 34 Champion Cities to begin a small scale six-month testing phase to improve our idea. Final proposals for the grand prizes are due in August with an announcement scheduled for October 2018.

This coming Tuesday marks another exciting milestone in our Community Branding Initiative as we host Bigfish Creative Group for their presentation to your Economic Development Committee at 3:30 p.m. The presentation will be followed at 5 p.m. by a reception for the firm at the Mayton for the full Council, the EDC, and members of your Information Services Advisory Board. Our second finalist, North Star Destination Strategies, will be here on March 20th with the same itinerary. Both groups’ RFQ responses are available on the project webpage.

The annual kite festival was a huge success with the largest attendance ever. An estimated 5,000 people attended the event, up from the expected 1,200. Prizes were awarded in a variety of categories including best crash, smallest kite, highest flying and more. Thanks to the Cary Police, Public Works Special Events Crew and PRCR staff for all their help in making this year’s event a success!

The Smart Cities Council has announced that Cary is a recipient of the 2018 Readiness Challenge Grant and will now receive mentoring for a year as well as tailored products and services to accelerate our smart city initiatives. Cary’s grant focuses on smart parking, mobility and street lighting. Congratulations to the team!

Evan Stone, Vice President of Economic Development with the Cary Chamber was introduced to the EDC members at its meeting on Wednesday. Evan presented his economic development philosophy:

Since his arrival, Evan has scheduled ongoing meetings with town staff, met with several large companies (and scheduled more) and had discussions with the Sports Alliance.

In 2017 new requirements for utility development fees were established by the NC General Assembly in HB 436. Under this new law, to maintain our authority to levy development fees the Town was required to hire a consultant to conduct a new fee study. The new study is in final draft form. The law requires that the study be posted on the Town’s website to solicit comments for at least 45 days. The consultant must consider the public comments for possible adjustments to the calculated fees. Once the study is finalized after the initial public comment period, Council must hold a public hearing before considering adoption of the analysis. Council cannot adopt a fee that is higher than the fee calculated in the study. Staff plans to post the study on the Town’s website on March 19 so that Council may hold the public hearing and consider the study results in concert with the FY19 budget process. This process must be repeated at least every five years.

Emily Barrett spoke at the UNC Clean Tech Summit on March 1st in the Smart and Healthy Cities track. She spoke on a panel on electric vehicle (EV) infrastructure and policy providing a municipal perspective on EV infrastructure including the benefits of partnering to install charging stations in public locations through grants and public investment.

Deputy Town Manager, Russ Overton, along with staff from PRCR and T&F presented to Wake County’s evaluation team regarding the Town’s request for funding to upgrade the stadium lights at WakeMed Soccer Park as well as the lighting and sound system at Koka Booth Amphitheatre. The grant request was for the County’s Hospitality Tax Small Projects Grant. With only $3.5 million available, the County received a total of 10 proposals totaling over $11 million.

At last month’s Council meeting, some citizens from Wessex area expressed concerns about their water pressure. Staff observed the pressures and found that the system is operating as expected, with pressure over 100 psi throughout the day and during peak demands. Staff followed up with the property owners and in each case found that the low pressures experienced at the residences were attributed to a pressure reducing valve at the meter.

We’d like to recognize the efforts of Judy Newsome and Laura Morton for leading ADA training sessions for GoCary drivers and call center staff. A variety of topics were discussed, including effective communication, passenger safety, and accommodations for persons with particular disabilities. This training will better serve our passengers with special needs. Thank you Judy and Laura!

Well, that is all for this week. My next post will be on Sunday, March 18th.  Although I have Facebook and Twitter accounts those are not the best means of communications with me. Please send all Town of Cary questions or comments to Harold.Weinbrecht@townofcary.org and email personal comments to augustanat@mindspring.com.

No Exit Puts Audiences In the Middle of the Drama