Cary, NC – It was a battle of two teams going through identical records over the past 10 games, 3-6-1, and both headed in the same direction: south in the standings. Only question was which team would dig a little deeper, try a little harder and give their fans a little more hope of making a wild card spot for the playoffs.

While these two teams have many similarities, for a little over two periods, the Canes looked like the better team. The Flyers have a good young group of players, as do the Canes, but the Flyers have a better group of forwards while the Canes’ young defensive corps is solid and in a few years, if all stay together, should be the shutdown defense in the NHL. The top defensive line for the Flyers is excellent but a quick dropoff after that.

The Flyers were the hottest team in the NHL in December and January then hit a wall in February. Injuries and cold sticks played a huge factor and if only those cold sticks could have lasted 15 more minutes, the game would have had a different outcome. The Flyers won the opening faceoff and tried an initial breakaway that resulted in the first icing.

Again, the Flyers won the faceoff with defenseman Ivan Provorov taking the puck hard to the goal sending a hard backhander off the outside the far post within the first 25 seconds. Cam Ward had the angle but too close for comfort so early in the game. Coach Bill Peters started the barking early as he knows the Canes have to just about win out to have any chance of sneaking in the playoffs. The Canes were strong in the neutral zone but just couldn’t get anything going in the offensive end to challenge young Alex Lyon in the Flyers goal. The Flyers were down deep handling a cycle along the near boards then Jordan Staal got his stick up a little too high for comfort and was called for holding. Staal is a beast on the penalty kill so this early kill was key and the Canes PK unit did a great job.

Ward stopped the only shot going down low with his head virtually between the shin pads of Wayne Simmonds. Late in the period, Staal used his strength to keep control of the puck along the boards, sending a pass to Teuvo Teravainen. TT sent the puck up to Jaccob Slavin on the left point who settled the puck sending a hard liner to the goal. Both Staal and Sebastian Aho were in the lane with Staal tipping the puck down between the legs of Lyon for a well deserved goal.

The second period looked like both coaches told their teams just to shoot the puck and hope for the best. Shots were taken but any by either team were at the logo on the goalie’s chest. Both goalies were making easy breadbasket glove saves with no rebounds.

Phil Di Giuseppe was having his best game over the past few games as he was fast and physical. With the Canes in for a very interesting summer, more players need to take their games up a notch like Di Giuseppe did and keep that level of play for the final 11 games.

Late in the period by pure hustle in going to the goal, Di Giuseppe drew a four-minute penalty when this defender got called for high sticking.

The Canes started the third having a majority of the four minutes remaining on the powerplay for a great opportunity. It wasn’t the Flyers defense was solid but more the Canes powerplay was in disarray and couldn’t get anything going. Later on this would be looked at as the turning point of the game.

At 8:19 Travis Sanheim scored on a tip in like Staal did in the first. Nothing Ward could do, just a good deflection. The Canes dug down deep and really turned on the heat after the faceoff. Slavin had the puck just inside the blue line and had his pass to the crease blocked. Quick on the puck, Slavin gathered it again and went around his defender going wide to the net, with a crowd in front of the goal, Slavin sent the puck hard with it tipping off a defender’s stick into the top far corner to out the Canes back on top.

After that goal, it was Flyers as they scored two goals in the next four minutes adding another empty netter, the fourth against the Canes in their past three games. The Canes have been a good team most of the season in the third but lately the third has killed the Canes.

The Canes next home game is Tuesday, March 20, 2018 against the Oilers. Be there! 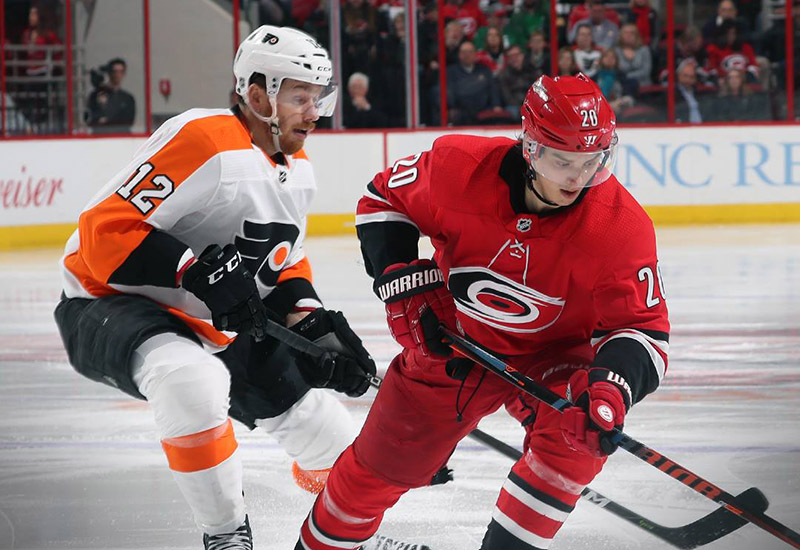