Cary, NC – North Carolina FC played their first game at their home stadium in Cary as a United Soccer League (USL) team. While it was an exciting debut, it was still disappointing as NCFC lost against the Tampa Bay Rowdies.

NCFC took on Tampa Bay at Sahlen’s Stadium at WakeMed Soccer Park on Saturday, March 17, 2018 in their debut match since moving from the NASL to the USL. It is a new league but fans saw the same aggressive play style from NCFC. NCFC made two close calls in the opening minutes but the Rowdies scored the first goal in the 23rd minute.

Determined to keep up the pressure, NCFC’s Steven Miller hit a low shot that made it into the Tampa Bay goal, tying the game in the 38th minute. But that balance did not last long as Tampa Bay earned a penalty kick and Tampa Bay’s Georgi Hristov made it a 2-1 game.

NCFC continued to attack the goal but kept hitting the posts. In just the first half, there were three shot attempts that hit the post, with several others blocked by Rowdies’ goalie Cody Mizell. Later on, Miller had a one-on-one opportunity against Mizell in the 62nd minute but the shot went wide.

If it wasn’t bad enough that NCFC could not tie the game back up, Tampa Bay stacked another point up in the 90th minute after a final goal from Jack Blake, ending the game 3-1. This is the first time NCFC has lost a home opener since 2011, though the team went by the Carolina RailHawks back then.

Looking Forward in the Season

This Saturday’s game may give some insights into what to expect from NCFC for the rest of the season. The team has maintained its aggressive style and in the first half, there were three narrow misses that would have drastically changed the course of the game.

Miller was a star player last season and appears to be just as strong this season. This match was also the NCFC debut of seven players: Alex Tambakis, Peabo Doue, Marios Lomis, Kyle Bekker, Daniel Rios, Bernhard Luxbacher and Michael Harrington. It was also the professional debut of Graham Smith.

The North Carolina Courage play their first game of the season this Saturday, March 24, 2018 against the Portland Thorns at 3:30 PM. 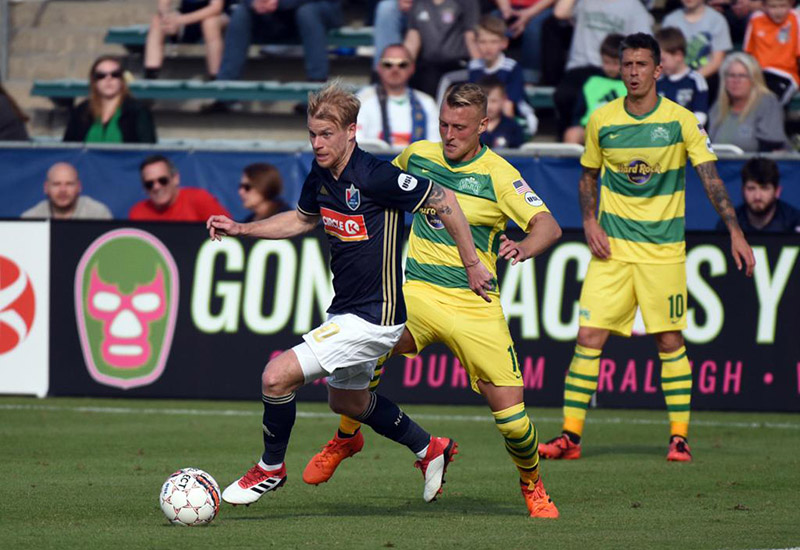