Cary, NC – The Carolina Hurricanes are making these last two weeks of the season still entertaining to watch with riding a three game winning streak, they’re still mathematically not eliminated from the playoffs. Rookie Warren Foegele, from the same hometown as Jeff Skinner, made his NHL debut and had a great game scoring a goal on his first shot and adding an assist on fellow former Checker, Valentine Zykov’s goal later in the game.

Senator Captain Erik Karlsson did not make the game, with Ottawa out of the playoffs, so he probably made the right decision to stay home with his wife after their recent family tragedy. Not being able to watch Karlsson play was a big disappointment but it doesn’t compare to what the Karlssons went through and are still going through with the loss of their son.

Cam Ward was back in goal having beat the Senators up in Ottawa just two nights before and was sharp again early. The Senators had Craig Anderson in goal and, while not having a great year, also looked sharp early in the game. The Canes defense, without Justin Faulk and Brett Pesce, did an excellent job thwarting any serious attack the Sens could muster. Klas Dahlbeck, paired with Jaccob Slavin, in my opinion, had his best game as a Hurricane as he made several strong plays early and one that may have stopped a goal by blocking a shot when Wardo lost his stick.

Trevor van Reimsdyk also played an excellent game joining the rush and taking a quick shot off a pass from Skinny midway in the first. On his next shift, TVR had three amazing poke checks stopping passes and breaking up plays each time and the last of those checks led to break for the Canes. Derek Ryan got the puck in center ice, whiffed on a pass back to the defense, gathered the puck again and tried to drop it off to Haydn Fleury, whiffed again still holding on the puck went into the Sens end and saw Foegele in the corner and whiffed one more time. No slam on Ryan as it had to be ice conditions.

Foegele jumped in on the puck and was checked hard into the boards, and whether it was strength or adrenaline, Foegele turned, kicked the puck to his stick, one-armed the defenseman away and made a power move to the goal slamming the puck between the post and Anderson’s pad and glove for his first goal on his first shot in his first NHL game. With his parents and siblings in attendance, his smile on the bench was worth a million bucks. Three cheers to Joakim Nordstrom who immediately fetched the puck for Foegele’s soon-to-be growing trophy case. Interesting note that four of the five skaters on the ice when the goal was scored were former Checkers. 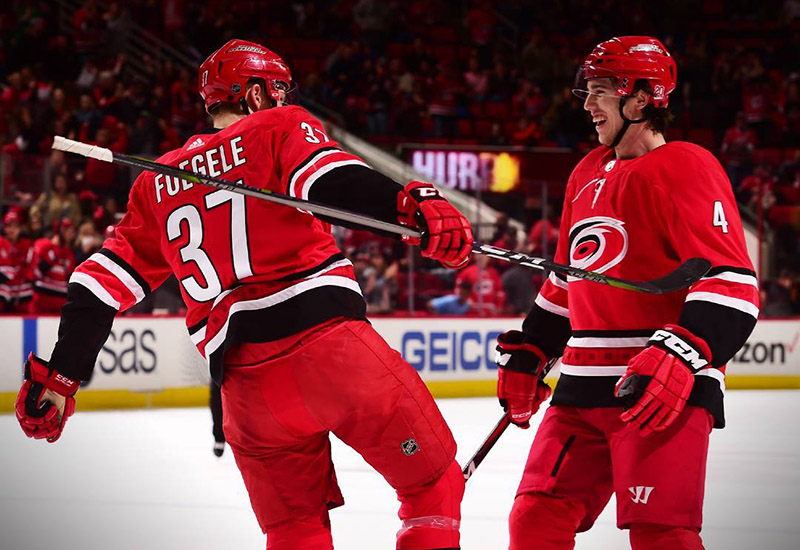 The Canes started the second as they ended the first being the more aggressive team getting off shots, some good some weak but shots are shots and as Wayne Gretzky said, scoring goes up when you shoot the puck. Just over the nine minute mark, the Sens got a three-on-one breakaway. Mark Borowiecki came down on the left side, passed to Jean-Gabriel Pageau in the high slot with Noah Hanifin the lone defender.

Hani dropped down to the ice to block a pass but Pageau flipped the puck over Hani to Mike Hoffman who launched a cannon of a shot but Wardo anticipated the pass/shot, stacked the pads and caught the rebound for a NHL highlight save. Depressingly, right after the faceoff, Bobby Ryan scored on a turnaround shot with Slavin as a screen.

The Canes regained the lead five minutes later with Ryan passing over to Foegele for a shot, Anderson made the save but Zykov, for the second game in a row, got in the dirty area of the crease, kept digging for the puck and was able to know it in for the eventual game winner. Less than two minutes later Jordan Staal made a crisp pass to Brock McGinn in the high slot who buried a wrister after picking his corner.

The Canes defense went unsung in the game but did a great job keeping the Senators at bay. Karlsson leads the team in scoring and is an amazing player. Without his leadership on the ice, the Sens are a weak team. Even with a penalty to Derek Ryan in the third, the Canes D-corps still limited the Senators to just eight shots and with a team needing to get back in the game, the defense along with the forwards solid forechecking was nice to see. Late in the game with Anderson pulled for the extra attacker, Sebastian Aho took a pass from Haydn Fleury to keep his scoring streak gong now at nine games.

Next home game is this Saturday, March 31, 2018 against the Rangers. It’s the last Home Grown Series game and should have a great crowd. Be there!

April 2018 Films at the Cary Theater
Scroll to top